The Democrats' cack-handed photoshopping of a socialist poster tells us all we need to know about this putatively "progressive" party.

Tuesday before last, the US congressional Leader Nancy Pelosi was asked by CNN to name the true heart of her Democratic Party. It would have been unseemly to name herself, of course, and just plain foolish to name her counterpart in the Senate, Chuck Schumer, a bloke about as popular with the people as haemorrhoids and NAFTA.

She might have easily answered Bernie Sanders, who had, just a few days before, easily topped yet another “which US politician can you actually stomach?” poll — this time, one conducted by Fox News, an outlet hardly known for allowing even the statistical praise of guys inclined to Occupy Wall Street. But she didn’t. This party is even keener on disappearing the critics of capitalism than employees of Rupert Murdoch.

Shortly after Pelosi’s refusal to state the obvious, the Democrats performed another act of conspicuous erasure. When the Trumpcare bill failed, the party issued this tweet evoking the optic of rebellion, a snap of protesters under the banner of “Persist”, one of them holding a sign saying only “Trump is a Symptom”: 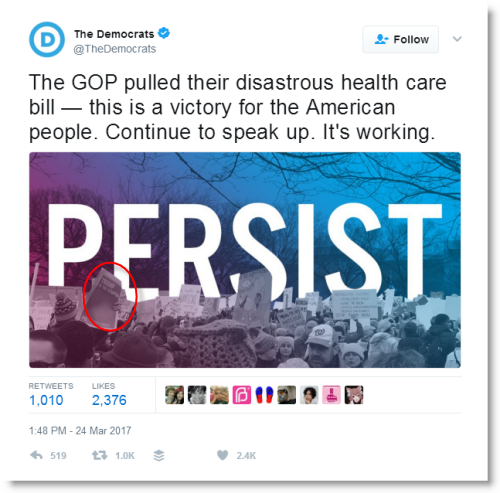 This sign shared on Twitter was quite clearly doctored, and not just because there was a big bit of blank space after a phrase that doesn’t really make sense on its own. For the many kids who have newly come to socialist reading, often via the Twitter platform, the word “symptom” is well known. It is one famously used by the readable Italian anti-fascist Antonio Gramsci to describe the horrid historical instances and figures, such as Mussolini or, if you like, Trump, that arise in periods of economic crisis. Such are “symptoms” of morbidity and these should not be held responsible for social decline, but as a sign that society is struggling toward new forms of economic organisation.

Across social media, young US leftists quickly restored the redacted sign, which was published by the Party for Socialism and Liberation and had read:

The story became big enough even for fact-checking site Snopes to address, ensuring that millions of young people, shown in poll after poll to be dissatisfied with the current political economy, read a communist slogan. A cynical Democratic Party succeeded where generations of earnest Trotskyists had failed.

As anyone who has ever heard the name “Sigmund Freud” knows, the repressed will return. If you deny or conceal an urge, it’s gonna explode at some point. Among Millennials, we can see the urge toward new forms of social organisation manifest in both the alt-right and socialist or communist groups. These kids consigned to their parents’ basements are cranky. As they should be. There’s a housing crisis, both here and in the US, and a future that promises little but chronic dissatisfaction. And there are policy leaders as happy to erase the fact of Millennials’ very real concerns as they are communist slogans.

Policy leaders and mainstream pundits utter faith in a model of economic thinking proposed centuries ago. You can call it “neoliberal” if you want, but the idea of unchecked growth in enterprise belongs to David Ricardo and Adam Smith. Had there been such a measure as GDP during the Enlightenment, these thinkers would have overused it, assuring the youngsters that everything is okay, because that figure’s on the rise.

This remains the insistence of so many leaders, including the Australian Labor Party who continue to point to GDP growth as the clever work of Paul Keating. Having heard this erasure of a truth for all their young lives, Millennials know that this measure is not one of their own lot. What we have is a huge bunch of young voters who now understand “economic growth” to be a synonym for their own destitution.

Leaders simply cannot keep borrowing the garb of true rebellion and hope to win. In the US, older liberal pundits talk about older Democrats as figures of the resistance and the only people who can believe some crap about, say, the NSA being a force for good against the evil of Trump are other liberal pundits. We see this tactic used locally, too. Establishment right figures like Cory Bernardi characterise themselves as youthful rebels, and many in the ALP follow the wan example of the Democratic Party and try to come across like warriors for sexy justice.

Very few young people will continue to buy this malarkey. Does no one remember being young and having a fine nose for bullshit? These douchelords, especially those from centre-right parties like the ALP and the Dems, come across like Christian street preachers who ask you to “rap” about a real gone dude called Jesus. Unfortunately, a Bernardi comes across as more legitimate in his hatred for things as they are. I imagine this is because he legitimately hates everything, and urgently needs the help of Dr Freud.

Instead of naming the figure who, even if independent, breathed the life of angry youth into her old, mild party, Pelosi first selected “um”, followed by those up-and-comers, Hillary Clinton and Barack Obama. This is the future for putatively progressive parties: a disastrous past.

Nancy Pelosi is a morbid symptom.

Trumpism will live on. Here are 5 things Biden needs to do to weaken its grip

Thanks Helen, my favourite piece of yours this month.

Glad to get in your good books before the month is up, A!

Trouble is, the Millennials aren’t “a huge bunch of young voters” because the prevailing hypocrisy (not to mention the Republican gerrymander) has left them too cynical about democracy to waste their time voting.

The no show voters are important still.

They can be persuaded to vote if something they like comes along. This matters to the majors because the sort of thing they might bother to vote for might just eat a major. This is your Syriza scenario

Low turnout attacks the legitimacy of the vote, and the entire institution of parliament

This is a ticking time bomb for the major parties. I doubt they’ll make it. I wouldn’t bet on the entire institution dying with them, but if no one can solve the problems at the heart of the crisis it wouldn’t be the first time a whole system of governance collapses.

And signs like “capitalism is the disease, socialism is the cure” are sure to get asset monopolising rent-seekers and “aspirational” working class suckers out in droves to support neo-fascism as their preferred alternative.

Just like it has in Britain and the US.
http://www.telegraph.co.uk/news/2017/02/27/jeremy-corbyn-declines-request-address-meeting-mps-humiliating/

Because reducing politics to a binary disease/cure metaphor is so reassuring, and in no way resembles bleating “four legs good, two legs baaad”.

Yep, the working classes who welcomed Trump’s promises to cut the taxes of billionaires and slash their health care really wanted socialism.

And the leadership of Corbyn has really made British Labour far more electable…(if you don’t count the polls, and by-elections in seats it has held for generations)
http://www.telegraph.co.uk/news/2017/02/27/jeremy-corbyn-declines-request-address-meeting-mps-humiliating/

The system is messed up, sure. But reducing the complexity of economics and governing into the form of a binary “disease” and “cure” metaphor only serves to make the hardcore socialists even more frightening to the majority of the electorate than the hardcore capitalists/neo-fascists.

Sometimes I like to jokingly call what you’re talking about ‘NEETism’ (NEET means Not in Employment, Education or Training, it comes from the UK bureaucracy).

There isn’t really much common between NEETs, we are too scattered across the political spectrum, a state of NEETdom can produce out and proud nazis, it can spit out MLs, or anarchists. I have even met a monarchist NEET, dude wants the Hapsburgs’ to rule Europe, for reals. There are 2 things in common though, a surfeit of time to spend on reading crap (you can only jerk off so many times a day), and a general bewilderment at the world we live in and the absurdity of our own existence.

It is a bittersweet gift of free time, given in the typical liberal fashion, as the freedom to waste time.