Rocking the House ... redundos in Queensland ... Latham's got no friends ...

Way up in the sky, little darling. Queen’s Terrace in Parliament House was a packed house last night for the second annual Parliamentary Friends of Australian Music event. The venue change to the public area of Parliament, from one of the courtyards used last year was because Department of Parliamentary Services wouldn’t accommodate it, according to the evening’s MC, Herald Sun journo Rob Harris. “Thanks for nothing, DPS”.

Harris also suggested having a moment’s silence for Mark Latham. “But, fuck it.”

Opening the event was The Australian‘s indefatigable Strewth scribe James Jeffrey on the bagpipes playing AC/DC’s Thunderstruck, which brought the house down but not in a way that means more security measures are required. Liberal MP Nicolle Flint and Labor MP Stephen Jones led the proceedings. In a lengthy intro, Flint listed six ways she thought politicians and musicians were similar, including a reference to being opposed to nanny-state laws impacting live music. This prompted one Labor (we assume) staffer in the audience to make a sly reference to former Liberal Premier Mike Baird’s lockout laws.

Diesel, Megan Washington, Montaigne, Ross Wilson from Daddy Cool, and Kav Temperly from Eskimo Joe all rocked the House with helpful interludes talking about how good copyright is, songwriting courses, grants and other things APRA and the Australian Hotels Association (as sponsors of the event) wanted to lobby the parliamentarians on. 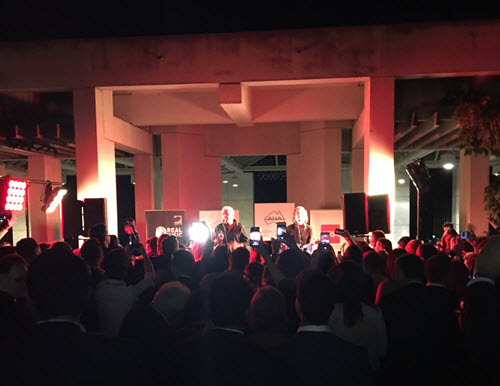 Darryl Braithwaite and his bright white hair stole the show, however. In an era where the Parliament is so divided on party lines, never has there been a better show of unity than watching parliamentarians and staffers of all stripes from Labor, to Liberals, to Greens, to the Nick Xenophon Team, and even One Nation chief of staff James Ashby (conspicuously absent from the Peter Slipper portrait unveiling) all singing the early-’90s classic The Horses in unison under the Australian flag of Parliament waving on a crisp and clear Canberra night.

Wilson did not play Eagle Rock, which one parliamentarian suggested was because, if he did, everyone would have to drop their pants. And no one wants that.

Evacuations at Gold Coast Bulletin? We’ve heard that editorial staff at the Gold Coast Bulletin have been called in and told roughly 10 roles (20% of a staff of just over 50) will be made redundant. Our tipster said the possible job losses exacerbates worries among the staff about the amount of local content the paper produces — the paper was already lifting substantial amounts of copy from the The Courier Mail. A meeting with the union is set for tomorrow and a final decision on who stays and who goes is expected today or tomorrow. “Due to a recent review of our operations on the Gold Coast, we have updated our newsroom to a more efficient, modern operation,” a News Corp spokesperson told Crikey. “Unfortunately, this has resulted in a small number of job losses within our editorial department. As a business, we are constantly reviewing our operations to identify opportunities for both savings and reinvestment.”

Markie no mates. Mark Latham’s mates and defenders have deserted him after his sacking from Sky News, with only Andrew Bolt and Michael Smith somewhat defending him in editorials so far. Bolt dedicated precisely 56 words to how “sorry” he was that Latham was sacked and his feeling that “we will all be poorer without his insights into the culture wars”. Meanwhile, Smith’s punchy, unadorned prose (“Like I said, I don’t like him. But I like Sky News even less than I like Latham. The decision to sack Latham is wrong.”) expressed concern about the “ratcheting down of our freedom of speech”. Is it that ratcheting down of free speech that’s caused Latham’s right-wing allies to be silent? Or do they think he crossed the line as well?

Mad Mark Latham, the hater’s hater should be given a guest spot on the 4 nights per week mutual tongue bath between Blot & the Poison Dwarf on Macquarie. He filled in during the Hobbsean (nasty, brutish & short) one’s sojourn in the jungle – during which a large number of venomous creatures bit him and died of toxicity – when the unDivine one was having her spat with Blot about the Return of the Clown Prince.
Talk about deserving each other.