We’ve finally learned what it takes to get fired from Sky News.

For Mark Latham, it wasn’t defaming his colleague on his barely-watched Sunday program Outsiders.

It wasn’t calling ABC broadcaster Wendy Harmer “disabled” and a “commercial failure” after she attacked the program on Twitter.

It wasn’t accusing a senior bureaucrat of hiring employees based on “the shape of their genitalia”.

It wasn’t even attacking a 15-year-old girl for being privileged and selfish.

Latham was not sacked — or even suspended — until yesterday, after the Daily Telegraph, with comment from ministers, reported that the former Labor leader called a Sydney Boys High School student “gay” when discussing a video the school produced about gender equality. Maybe it was the straw that broke the camel’s back, but we found it.

Latham had made those comments on his program back on March 12, but Tele reporter Sharri Markson wrote about it for yesterday’s paper, including criticism from Federal Education Minister Simon Birmingham and NSW Education Minister Rob Stokes.

As Latham rightly pointed out in his return to Twitter last night, there hadn’t been a problem with what he’d said until the Tele picked it up. 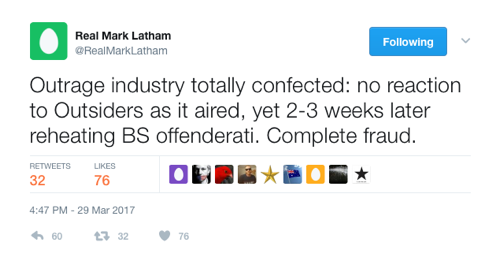 The Guardian also published a story yesterday by Amanda Meade on comments Latham made on Sunday’s show about the Reserve Bank governor’s 15-year-old daughter, suggesting she was privileged and needed to be more interested in the disadvantaged.

Sky News political editor David Speers announced Latham’s sacking on his show, and then on Twitter yesterday afternoon. Sky News CEO, Angelos Frangopolous, also confirmed this on Twitter, saying: “While we support strong opinions and robust arguments we pride ourselves in doing so in a civil and respectful manner”.

Former NSW premier and current Sky commentator Kristina Keneally lodged a formal complaint with Sky last week over comments Latham had made, calling her an “Obeid protege” among other statements she considered defamatory.

Wendy Harmer tweeted that she only wanted an apology from Latham, and in response to last night’s sacking, repeated this in response to a comment from The Australian’s columnist Chris Kenny. 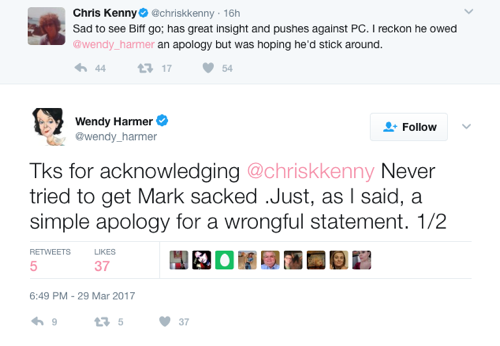 Latham had his column cut from the Australian Financial Review in 2015 after a number of his columns attracted complaints — including a defamation lawsuit from author and journalist, Lisa Pryor.

He also resigned from Spectator after editor Rowan Dean refused to run one of his columns about the author of this week’s Tele piece, Sharri Markson, back when she was media editor at The Australian.

Sky News would not comment on whether Outsiders would continue without Latham, or which of his comments in particular had triggered his sacking.

Perhaps the Old Boys from SBHS gave the ball to Scomo and he passed it on to Birmo who grubbed it along the ground for Markson to score the try? I seriously doubt that this has anything to do with the spear tackle on the kid.

Believe me, yes GPS school, but not SBHS. I went to SGHS and I am their vintage.

I’ve long wondered if Latham hasn’t simply (if tastlessly) been parodying conservatism from within – even before he said what he did about the banality of profanities (not least in our media), citing The Oz.

Seriously, how many people watched Latham? The Oz holding him up as some defender against the onslaught of PC? The man is out of date and out of touch. Of course he’s right about the concocted cycle of outrage but it still doesn’t make up for him being a total and utter bore and stupid bloody wanker. Can’t you spare us all the sight of his ugly, angry mug and just let him go out with a whimper and dissolve into obscurity?

Disappointing to see Mark Latham go. He certainly challenged us, in a good way.

So the CEO wants his commentators to act in a civil and respectful manner? Well he could start with reigning in many of them whenever someone of the “left” supports climate change action or points out that not all Muslims are terrorists. Perhaps a reminder that not all Christians are pedophiles, though a handful are, would be sufficient to prompt some moderation of their tone?