Hinch’s Senate Diary: why I changed my mind on penalty rates

My brother Des is visiting Canberra this week from across the ditch, and he reminded me of the day when, as a seven-year-old kid, he went to the shop to get a tin of golden syrup — which, in New Zealand, is like treacle.

He went to book it up, put it on the account, and the shopkeeper refused. He told my brother, “No. Your parents have no money.” And he trudged home, empty-handed.

That was back when, four years younger than him, I was wearing his hand-me-down short trousers to school.

I thought of that time after I said I would abide by the umpire’s decision and accept the FWC call for a cut in Sunday penalty rates. And as the email and Twitter insults poured in:

In my own case, in my book, The Fall and Rise of Derryn Hinch, I started by talking about my personal adult nadir. The day when I stood at the ATM in the Victorian country town of Woodend on a Saturday morning and saw my balance was $6.49. The minimum withdrawal was $20 so I had no money at all. Which is why, for a year, I lived on two-minute noodles, in what I call my “Grizzly Adams period”. And then I went to do radio on 5DN in Adelaide and my climb back up the financial mountain began.

But back to Sunday penalty rates. My personal position has been very public since my radio days. I have said they should be the same as Saturday rates. And I know a lot of small business owners agree.

But, in my maiden speech, I promised that I would listen to people. I said last week I supported the umpire’s position. Personally, I still do — but I decided to go to the third umpire. The review umpire: the people, the Sunday workers, the single mothers, the university students who study all week and only work on Sundays. I listened.

On my senator salary, a few bucks, more or less, doesn’t mean much. But, as outlined above, I remember the days when it did.

As a party leader, I had to remember that the argument should not be about my personal circumstances or personal opinion. It had to be about what’s best for the community.

I gained some valuable experience in the Senate the other night as the government shrewdly cut their omnibus in half and negotiated both halves of the bus through the upper house minefield.

It was a bruising, but valuable, political lesson as we rode the omnibus bill to its nocturnal destination.

Finance Minister Mathias Cormann was negotiating with me and Senator David Leyonhjelm over our amendments to cut off any government subsidies for wealthy families.

I had only recently discovered that families earning $350,000 to $500,000 were still receiving 50% childcare subsidies from the taxpayer. To me, that was outrageous. At the risk of having my Melbourne office blocked by Toorak Tractors (SUVs) I moved that the subsidy go to zero from $350K.

[Hinch’s Senate Diary: ‘I was one cross crossbencher this week’]

Leyonhjelm wanted to go further: for childcare subsidies to start tapering off from $200K and end at $350K.

We both agreed to vote for each other’s amendments and then vote for the government bill. I put that to Cormann and — needing our votes for an extension to sitting hours — the Finance Minister agreed.

The LDP Senator’s amendment failed, mine passed; the bill passed and Leyonhjelm tweeted: 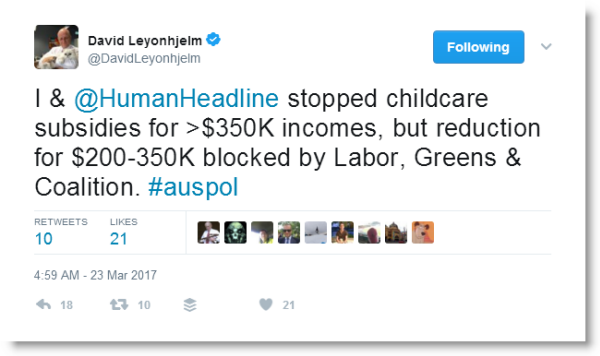 In the tweet, Senator Leyonhjelm forgot to say that, while he supported my amendment to stop childcare subsidies after $350K, he did not then vote for the bill.

At the last minute, he told me he was abstaining because, “I have to think of my constituents”. As the bells were ringing for four minutes, he turned to flee the chamber. I thought that if I was going to be ratted on it would be in public and managed to keep him engaged in conversation until the Senate President called “lock the doors” and there was no escape.

Senator Leyonhjelm then sat on the abstention bench along with Senator Cory Bernardi who told me, “I didn’t make an agreement with anybody”.

As he came down off the bench, Leyonhjelm boasted: “I got away with it.”

I said: “Not with me you didn’t.” Lesson learned.

Were you suffering from retrograde amnesia and tinnitus before the vote; when all this listeny stuff was supposed to be occurring (back when the people, the Sunday workers, the single mothers, the university students who study all week and only work on Sundays; were saying those very things that you are now getting upset about Twitter being mean to you over)?

Or did the valuable political lesson, concern the purpose of the “listening tour” that one does AFTER the electorate thumps you?

Or was it a lesson on Paul Keatings prescience about Senating (to wit, “unrepresentative swill”)?

But back to Sunday penalty rates. My personal position has been very public since my radio days. I have said they should be the same as Saturday rates. And I know a lot of small business owners agree.

Raising Saturday rates achieves this. Somehow I doubt that’s what you or the business owners are thinking.

I had only recently discovered that families earning $350,000 to $500,000 were still receiving 50% childcare subsidies from the taxpayer. To me, that was outrageous.

What’s much more outrageous is a) how much childcare costs and b) that dual-income families are now close to a necessity for families who want to have some chance of owning their own home.

Glad you changed your mind on penalty rates, DH, but you do the public a disservice calling our outraged opinion the ‘third umpire’. We’re no more a ‘neutral’ umpire than the FWC. We know the FWC is merely a construct to take the appearance of partisanship out of inherently political decisions (such as affect the wage/profit share in every enterprise). What we saw from the FWC was a decision so biased in the interest of profit that we howled. You didn’t consult the third umpire; you jumped at the outraged roar of the crowd in the stands.