A new industrial fight is on the way, energy solutions are in sight and Britain tells the EU "we're out". It's the news you need to know, by Max Chalmers and Charlie Lewis.

The fight over industrial relations continues to gather pace, with the federal government making a submission to the Fair Work Commission requesting it take “a cautious approach” when considering an increase to the minimum wage. The government argued that increases could limit employment and that those in low-paid jobs are “are often found in high-income households”.

Its submission comes just a day after ACTU secretary Sally McManus called for a major increase to the minimum wage of $45 per week.

Even as pressure heats up on unions, with the CFMEU yesterday handed $242,000 worth of fines by the Federal Court for blockading a work site in 2013, the political winds appear to be turning. After initially opposing Labor’s senate motion to overrule Fair Work’s cuts to Sunday penalty rates crossbenchers Nick Xenophon, Pauline Hanson, and Derryn Hinch have all backflipped. With the Coalition opposed, the legislation will still die in the House.

SOUTH AUSTRALIA FINDS THE ENERGY TO CARRY ON

On one hand, federal Energy Minister Josh Frydenberg has dubbed the Labor leader a “premier with no clothes” after it was revealed he turned down an offer from Alinta Energy to keep the state’s Northern power station operational, at a cost to the taxpayer of $25 million. The premier responded by saying Alinta had not guaranteed the station would stay open until mid-2018, even if the state government coughed up the funds.

He may presently appear nude but Weatherill has been handed a fig leaf. An agreement between Origin Energy and Engie will see a second turbine at the Pelican Point generator restart, easing fears about future blackouts in the state.

A preliminary report into a light air plane crash that killed five people has found no evidence of engine failure. The Beechcraft King Air B200 ploughed into a Direct Factory Outlet just moments after takeoff from Tullamarine airport. Investigators have been hampered by the severe damage to the aircraft and the fact its in-flight blackbox was not recording during takeoff.

Canberra: The Senate is expected vote on the government’s proposed changes to the Racial Discrimination Act, though the vote could run late into the night and potentially be held over another day. The government is also racing to pass its company tax cut legislation, in the last sitting day before parliament returns for the federal budget in May.

How can our diplomats represent us if no one knows what Australia stand for? — Marc Purcell (The Sydney Morning Herald): “Australia needs a bigger, more coherent foreign policy story. It must resonate beyond election cycles and clearly and simply define what our foreign policy intends to achieve. You shouldn’t need a politics textbook to translate it. There is no narrative that will appeal to everyone, but Australians hold common values on which we can design our foreign policy. This isn’t virtue-signalling, as some have suggested; it is pragmatic.”

Abbott making enemies as sands shift — Niki Savva (The Australian): “On Monday, before Foreign Minister Julie Bishop could walk the few steps back to her office from a committee room where she had sought to reassure backbenchers about the extradition treaty with China, the Prime Minister’s Office was receiving calls about it from journalists. The next morning, lo and ­behold, Tony Abbott was in print bright and early in The Australian saying the treaty should not be ratified. That would be the same Tony Abbott who, as prime minister, had assured China that Australia’s policy to ratify remained.”

Bill Shorten leads the race to the bottom — Dennis Shanahan (The Australian):  “The ferocity of Turnbull’s campaign and his preparedness to use blackguarding terms appear to have had an impact in the polls on the Labor leader and now Shorten is demonstrating he’s prepared to go lower. As Peter Dutton said in defending Turnbull, what we are seeing in question time is a “test of character”. It’s a test of character that is being strained through royal commissions and legal fights over payments of hundreds of thousands of dollars to unions and hundreds of millions in lost investments.”

Coalition rolls over too easily on China extradition treaty — James Campebell (The Herald Sun): “The Coalition leadership should have got the message from Labor: we’re not voting for this. Instead it pressed on, earlier this year releasing — again quietly — its response to the committee report, which not only rejected Labor’s minority report but recommendations by its own members that the Attorney-General’s Department report each year on the fate of people extradited from Australia, including whether their trial had taken place yet; if so, what sentence they received, and whether an Australian government official was permitted to attend.”

British Ambassador to the European Union Tim Barrow has hand delivered to European Council president Donald Tusk the letter which officially triggers Article 50 of the Lisbon Treaty and notifies the European Union of Britain’s decision to withdraw.  In her speech to parliament coinciding with the delivery, UK Prime Minister Theresa May has called for unity, saying “now that the decision has been made to leave the EU, it is time to come together”.  This begins a formal two-year process of negotiations  around the terms of Britain’s exit. “There is no reason to pretend this is a happy day,” Tusk said. — Al Jazeera

According to Iraq’s federal police chief Raed Jawdat, government forces are closing in on the area around the Great Mosque of al-Nuri in Mosul, where Islamic State leader Abu Bakr al-Baghdadi proclaimed the establishment of a “caliphate” in 2014. Jawdat also said police had retaken the Qadheeb al-Ban district and the al-Malab sports stadium, in the city’s west, while an official told Reuters that elite troops from the interior ministry’s Rapid Response Force were also advancing into the Old City. Mosul is the last major remaining urban stronghold for IS in Iraq. — BBC

United Nations human rights experts have used a joint statement to call on Russia to release protesters arrested across the country at the weekend, and to annul any sentences already handed down. The statement, issued  by the UN special rapporteurs on the rights of peaceful assembly, opinion and human rights defenders and the chairman of the UN working group on arbitrary detention said up to 1,000 demonstrators were arrested at the weekend’s protests — in response to allegations of corruption against Prime Minister Dmitry Medvedev — and a number of them were sentenced to imprisonment and fines. Russian opposition leader Alexei Navalny has appealed his sentence of 15 days jail for organising  the protests and “resisting police orders.” — Reuters

‘Hello Bob’: President Trump called my cellphone to say that the health-care bill was dead (Washington Post): “At first I thought it was a reader with a complaint since it was a blocked number. Instead, it was the president calling from the Oval Office. His voice was even, his tone muted. He did not bury the lead.”

How the U.S. Protects the Environment, From Nixon to Trump (The Atlantic): “Trump could be the most hostile president ever to sit over the agency. His only rival is Ronald Reagan, who did not enjoy the benefit of a Republican Congress. Suffice it to say that this scares a lot of Americans. Many of them have looked anew at the environmental policy machine running in the background of the government and asked, essentially: Wait, that old thing? How does that work?”

Could Ms. Pac-Man Train the Next Generation of Military Drones? (The New Yorker): “The skill that Ms. Pac-Man demands of its players—making multi-objective, dynamic decisions quickly—turns out to be the same ability that artificial-intelligence researchers wish to program into many of their bots. And according to Silvia Ferrari, the director of Cornell University’s Laboratory for Intelligent Systems and Controls, the game is an especially ideal environment for training autonomous military machines.”

Note to readers: Yesterday’s edition of Crikey Worm had a little bug with broken hyperlinks. If there’s anything you missed, you can see it here. 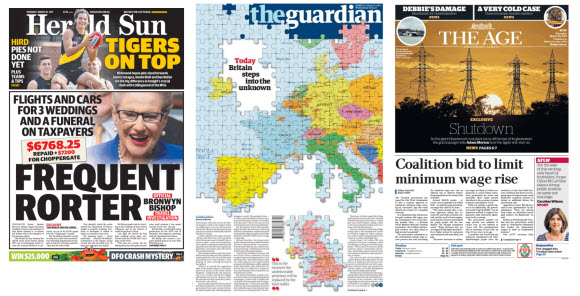