As journalists were warning viewers to stay inside during Cyclone Debbie, they were battling the cyclonic elements themselves.

Where there’s a dramatic weather event, you’ll find a battered reporter desperate to demonstrate just how dramatic it is.

And so it was yesterday, as Cyclone Debbie tore into Bowen, Queensland, and its surrounds.

News crews descended on towns to report on the story, and as journalists were warning viewers to stay inside, they were battling the cyclonic elements themselves.

Whitsundays Shire councillor Mike Brunker told Crikey he’d seen a reporter who had filed while standing next to an open drain, and another who’d been out there in Bowen looking like a “drowned rat” all day was doing more harm than good.

“A lot of people up here just turned it off. It’s so hypocritical,” Brunker said. “Have they got a force field around them or a bullet-proof vest? They’re telling people to go back inside while they’re standing out there in it. Until someone gets killed, they’ll keep doing it.”

Brunker said one member of the media was taking shelter at his house when the cyclone was at its worst, when they were asked to go back out into the storm to get more footage.

“You don’t go and stand in a bushfire and report on it from inside the fire. You don’t have to put people that much in the picture,” he said.

Brittney Kleyn was crossing into Today with Lisa Wilkinson when she called short her live cross to take shelter from the vicious winds.

“We’re remaining safe but really the conditions aren’t suitable for people to be on the roads or walking down … it’s really not safe to be outside,” Kleyn said, as she was struggling to stand up against the winds. 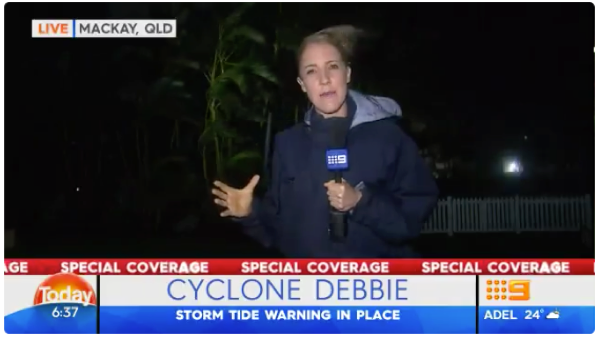 Seven’s reporters in Bowen repeatedly mentioned they were reporting from or near a building certified to withstand a category five cyclone (which, of course, doesn’t matter much if you’re not actually in it). Among them was Paul Burt, who really put himself on the line for the story, getting drenched all day during live crosses into Seven, and then again for a report for the 6pm bulletin. 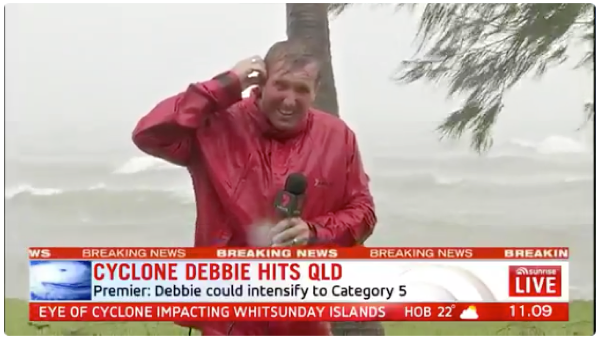 Kochie was particularly outraged at people (other than Seven’s crew) who were out yesterday morning.

As Lauren Marer in Mackay told Sunrise’s Kochie about felled trees in the town, she was also warning viewers to stay indoors:

“It is dangerous … we are advising people to take emergency services’ advice and not to go out to take pictures,” she told viewers, as Kochie could not believe that people were walking around during the cross. 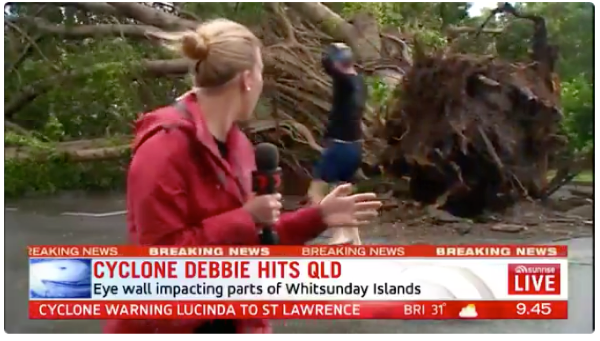 And then this morning there was Kochie again, doing exactly what authorities are asking people not to do: driving around to check out the damage before it’s cleared. 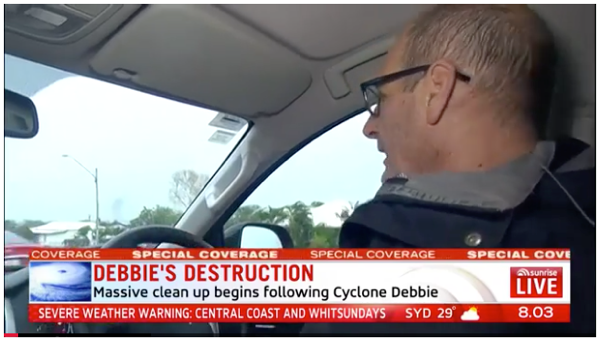 And not to be outdone, Nine’s Today did the same thing with a reporter in Bowen: 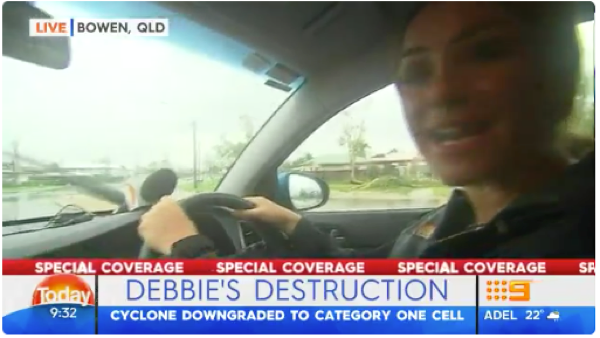 Brunker said that while he was grateful for the coverage and the attention on the destructive cyclone, he hoped in future the media would take a bit more care.

The commercial TV coverage was godawful.

Kochie driving about in the car was a classic. I was transfixed, mesmerised (as if confronted by an eastern king brown), unable to take my eyes off him for approx 60 seconds….then common sense prevailed before switching off. I hope Charlie Pickering can parody this, as with the hilarious Coopers Light send-up a couple weeks ago.

“Battered reporter” as in “Battered sav”?

And for the 80% or so of the population who not not live in Queensland, it was Debbie overload on all of our news bulletins, by the TV broadcasters. There was no escaping the vision format of vox pops, trees blowing, waves crashing, and boats bobbing the harbour. Not exactly riveting news you are 3,000 kms from the action.

But it would be riveting if it was affecting you? On/off switch – you don’t have to watch

Who enforces workplace health and safety laws? The fines need to occur for unsafe practices, not just incidents. You’ve got great video evidence.

Being close to a shelter doesn’t help if the cyclone picks up anything relatively heavy and rams it into you at many km/hour. That can happen very quickly.