Getting away with it, Scott free. It’s not unusual for the staffers of politicians to omit verbal stumbles made by their bosses, but two curious edits from Treasurer Scott Morrison’s office had us raising our eyebrows. The first one was innocent enough. On ABC’s AM program, Morrison confused AM host Sabra Lane with RN Breakfast host Fran Kelly. ABC records the stumble, ScoMo omits.

The second time came when right-wing shock jock Ray Hadley had a dig at Morrison at the end of their usual weekly interview, saying he hoped he’d be talking to Morrison next month as treasurer — in reference to rumours that Morrison might go if the budget doesn’t go well (although the budget isn’t until May). “Of course you will,” was Morrison’s response, but the whole exchange was left out of the end of the transcript on the minister’s website.

Baby, we were born to run (for political office). The hits keep on coming from our request for members of a parliamentary super group — with a line-up so far featuring Peter Garrett on lead vocals, Tony Abbott on backing vox, Craig Emerson on guitar (and … whatever this is), Graham Perrett on bass, Athol Guy on double bass and Steve Gibbons on … bass again, we may need something in the higher registers to cut through all that bass. Former New South Wales premier Kristina Kenneally has been put forward as a possible co-lead vocalist, with this ABC footage of her and press secretary Mark Tobin attesting to her lilting tones, which could nicely pair with Garrett (with the added bonus of making Abbott harder to hear). We’re told Ku-ring-gai MP Alister Henskens could slide in as an “accomplished” lead guitarist. According to his Facebook page, Tony Burke plays piano and guitar (and certainly, a photo from March 20 shows he has a sweet Telecaster, which Wills MP Peter Khalil may or may not have nicked). Given the preponderance of guitars, we might stick him on keys. A tipster informs us that former Victorian Labor MP Evan Thornley was the drummer in a Midnight Oil cover band when he was at Melbourne University in the mid 1980s. Also handy at beating the drum is Democrats senator and leader Andrew Bartlett who was in Brisbane bands I Am Vertical and Too Green For Summer (Whose I Don’t Believe It rounds out the 2004 compilation Rock Against Howard). Bartlett could also slot in on keys, having tickled the ivories in a group called The Cutters.

ACL goes to ground. As reported by The Australian this morning, because of perceived “threats” from LGBTI activists, the ACL applied, and was successful in, having the names of its directors and the directors of the associated Lachlan Macquarie Institute removed from the Australian Charities and Not-for-profit Commission (ACNC) register.

This came after a campaign from two activists over former PwC executive Mark Allaby’s position at the Lachlan Macquarie Institute and his new job at tech giant IBM. One side effect of the ACNC granting the ACL secrecy over who sits on its board is that the financial reports of the lobby, detailing how much money the political lobbying organisation takes in are now no longer on the ACNC website. Some donation information is still available on the AEC website, but much of the ACL’s financial information is now hidden. Crikey asked the ACNC what evidence the ACL provided to back up its assertions that its directors were under threat, but due to the secrecy provisions governing what the ACNC does, it could not comment on the case.

Additionally, it is believed that complaints have been made to the ACNC regarding the ACL’s political activity, particularly in campaigning against Labor both at the last federal election and in the WA election, potentially in breach of the rules regarding what charities can campaign on. The ACNC could also not comment on this but did confirm that of the 27 complaints received in the past two years about charities involved in political advocacy, some of them were related to charities set up to advocate for religion, like the ACL.

Burying the lede? The New York Times is one of many international outlets to have covered Cyclone Debbie, the category 4 storm currently buffeting north Queensland but we wonder if its tweet accompanying the story really got across the severity of what is happening in Queensland today. It reads: “A cyclone in Australia halted ferry and train service and closed a local airport.”

The article itself is a straight and informative take on a major event, but our eyebrows were raised at the choice of information in the accompanying tweet. Given that the up-to-275-km-per-hour winds and lashing rain threaten the safety of roughly 25,000 people in low-lying areas and could cause up to $1 billion in property damage, we’re not sure the inability of local residents to catch the train for a while is really the most important detail. 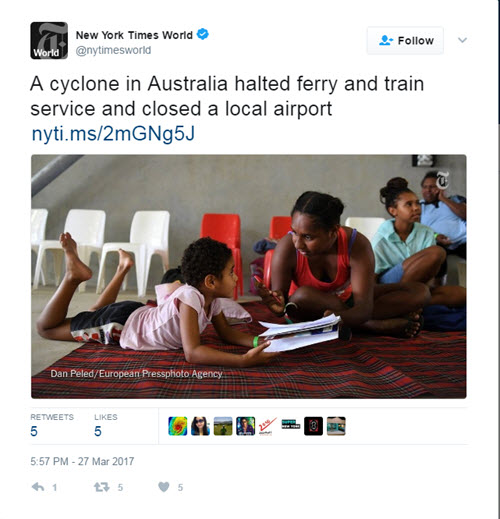