Postal vote in the mail. In its spillover Senate estimates hearing on Friday, the Attorney-General’s Department revealed that it had been asked by the Department of Finance about the possibility of a postal vote for the same-sex marriage plebiscite. This confirmed stories floating around that the hard-right conservatives in the Coalition were looking at this option as a way to keep running the plebiscite, without the pesky need for Parliament to pass supporting legislation. It would mean that voting wouldn’t be compulsory, and some suggest that this means conservatives believe it would skew towards the “no” side.

The Australian Electoral Commission sits in the finance portfolio and would be responsible for running the plebiscite in the event it gets off the ground. There is already some pushback from the moderates in the Coalition, so it may not even get to that stage — but the communication between the agencies suggests it has gone further than just idle chat among politicians.

ABC building woes almost over. Living through renovations is always a bit of a pain, so the staff over at the ABC’s Melbourne office will be glad it’s nearly over. Construction of the new building should wrap up by the end of the week, with staff moving into their new digs shortly afterwards. The process has been a bit of a pain for staff at the Southbank building, with tipsters telling us some complaints have been more serious than others.

Ms Tips hears some staff were exposed to epoxy fumes in the office while the renovations were taking place, and problems with the air-conditioning left presenters sweltering through News Breakfast and the 7pm bulletin each day. And then there were the journos fighting for hot desks, camera operators struggling to find power sockets to charge their batteries, and some taps simply not working. To make matters worse, the extra-sensitive smoke detectors in the new building mean they aren’t even allowed toasters any more, as reported by Crikey last year.

An ABC spokesperson said construction work had met the required workplace regulations at all times, in response to Crikey‘s questions about the exposure to epoxy fumes. “Once the building is opened and fully operational there will be sufficient resources and spaces for all activities,” he said. “The project is on time and comfortably within budget.”

18C legislation started before Leak’s death. The boffins in the Attorney-General’s Department revealed, at the one-off hearing for the 18C legislation reform, that they began working on drafting the 18C legislation on March 2. This was shortly after the parliamentary committee reported back, but before The Australian cartoonist Bill Leak died. This seems in contrast to the claims from the Oz that Cabinet decided to change the Act in the wake of Leak’s death.

The legislation is due to be debated in the Senate on Tuesday. As it stands, without the support of Nick Xenophon Team senators, the legislation is doomed. It has been suggested that by entering the legislation into the Senate rather than the House, it was designed to save those in marginal electorates, like Craig Laundy, having to vote on it, and then be campaigned against on the basis of that vote. It didn’t stop GetUp last week rolling out campaigns in those electorates with large migrant populations.

Eurovision tensions already on display. Hostilities between Russia and Ukraine are heating up again over the deadly serious issue of Eurovision participation. This year’s host, Ukraine, has banned Russian entry Yulia Samoylova from travelling to the competition, because she entered Crimea, which was annexed by Russia in 2014. Samoylova has been denied entry to Ukraine for three years by Ukraine’s security service for travelling to Crimea to perform at a gala event.

Ever the peacemaker, the European Broadcasting Union (EBU), which runs Eurovision, offered to bend the rules to allow Russia to compete by beaming into the competition via satellite instead of live on stage in Kiev. But Russia has refused, saying the rules demand a live performance on stage, and they will only participate if they’re allowed to do so. The two countries are now at a stalemate, with Russia saying it expects the EBU to step in.

Ukraine won the right to host this year’s competition after winning last year with 1944, a song about the forced deportation of the ethnic group the Crimean tatars by Stalin during the Second World War. Russia tried to have the entry banned under rules that disallow political themes in the entries.

Who needs to raise their game here? Towards the end of the WA Liberals’ disastrous campaign, the deposed Premier, Colin Barnett, huffily told a media scrum to “raise your game”. But perhaps he’s just not reading widely enough — some media outlets seem fairly switched-on to issues he appears to have missed.  In today’s Australian Barnett claims he first became aware of the campaign-killing One Nation preference deal when he read about it in the papers on February 12.

Perhaps he doesn’t read The Herald Sun, which reported on speculation around the deal on January 30, and followed up with an opinion piece on February 4. Perhaps he didn’t check out Andrew Burrell discussing the topic in The Oz on February 2? Or the ABC, when it reported on the major parties courting One Nation on February 3?

But surely he can’t have missed the piece on the ABC in November of last year, where he said One Nation were “not the party of 20 years ago” and refused to rule a deal with them, which started all the speculation?

Paliamentary supergroup — your suggestions. The parliamentary supergroup we invited nominations for last week is slowly assembling, thanks to Crikey tipsters. A number of readers nominated Craig Emerson for his legendary Horror Movie effort (which will still shock you right out of your brain) but we’d forgotten Emmo, in his days on Bob Hawke’s staff, was a guitarist as well as an economics adviser. Another reader points out that Athol Guy of The Seekers was a Victorian Liberal MLC in the 1970s, which means we have double bass locked down. Queensland Labor MP Graham Perrett once played bass for the anodynely named Once I Killed A Gopher With a Stick (enjoy the Gophers’ sub-Gobies efforts here). But between Guy, former Bendigo MP Steve Gibbons and Perrett, it seems the rhythm section might be a tad oversubscribed. And as a number of readers observed, yep, Paul Keating is definitely manager. We’re still shy a drummer and some guitarists, people — and surely there are some parliamentary pianists, flautists and violinists? 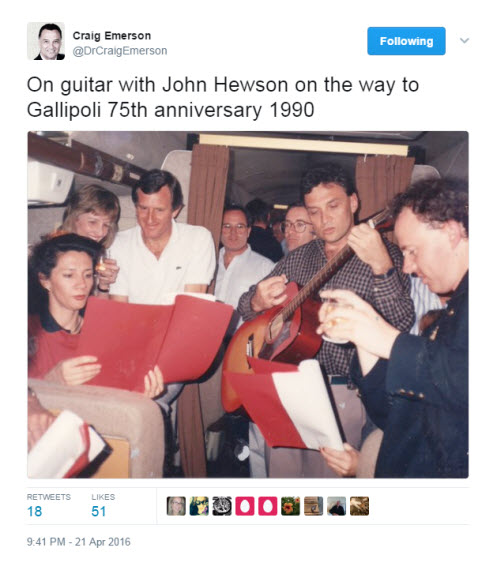 Oh, the poor little petals at ABC! I find it hard to imagine many real people actually were that upset by such tiny inconveniences – who has put the whinge-o-meter into the red?

Perhaps the latte machines haven’t been installed yet? Or are the wrong colour.