Amid the clichés in a Liberal thinktank's new review, there are some directions toward unorthodox policies.

While a new paper from the Liberal Party’s research body the Menzies Research Institute garnered the predictable coverage in the Australian Financial Review and The Australian, those august journals of record might rue signing up to grandly titled “The Shepherd Review: Statement of National Challenges”. Chaired by business and conservative eminence grease Tony Shepherd (“From the desk of Tony Shepherd AO”), the “review” will be a series of three (count ’em) papers to provide “multiple opportunities for community discussion and debate on the nature of the problems and the potential solutions”.

That is, having failed with an actual government via the disastrous National Commission of Audit — which Shepherd now acknowledges blew up the Abbott government when it was released just before the 2014 budget — the “doyen of debt” when he was chair of Transfield is now trying his luck with a kind of make-believe government down the road from Parliament House in leafy Barton, peddling the usual wares — lower company taxes, poorer wages and condition for workers, and Shepherd’s personal fetish of state income taxes.

Much like the Shepherd audit report, this one comes with plenty of errors of both fact and judgment. Again, climate change literally doesn’t exist — there is no mention of it, despite the pretence that this is a report about “national challenges”. The report complains that “the States rely heavily on inefficient stamp duties and counter-growth payroll tax”. In fact, payroll tax is “one of the most efficient state taxes” that operates similarly to income or consumption taxes; it is only more “counter-growth” than other taxes if you confuse the incidence and the impact of a tax. The Henry tax review suggested payroll taxes should be expanded to improve their efficiency, as did a NSW review.

Indeed, you often wonder where Shepherd and the rugged individualists at Menzies get their facts from. One source is the notorious World Economic Forum indices, which Crikey showed years ago to be nonsensical, based as they are on a survey of a few dozen business executives in each country. Hilariously, the paper explicitly relies on one of the most absurd indicators. “Australia ranks a lowly 53rd in the World Economic Forum Competitiveness Index measure of efficient public spending” the paper laments — except that specific measure is, as we’ve shown before, has no foundation in reality. It also relies on the WEF’s silliness for evidence that labour market regulation in Australia deters investment — never mind both the Productivity Commission and the Reserve Bank persistently noting the flexibility of the labour market under the Fair Work Act. The paper also lazily relies on one of the Business Council’s most discredited reports to complain about the cost of construction projects. Just to top it off, it entirely falsely blames the September 2016 blackout in South Australia on “the state’s over-reliance on intermittent sources of renewable energy”, a position now admitted even by the Prime Minister to be false.

That said, the paper is unusually non-partisan, and many of the complaints about government spending and the budget could be read as a dig at the government; it notes, contra Tony Abbott, that cutting skilled migration would make it harder to return to surplus. Even business doesn’t avoid a tongue-lashing. “Twenty-five years of continuous growth has bred a culture of complacency in business and government and this is exacerbated by the short term investment horizons of investors,” it complains.

But just where exactly is the review heading when it mentions the “challenge” of “a regulatory environment which sacrifices global competitiveness for domestic competition”? Is that the ugly interventionist idea of National Champions rearing its ugly head? The review also heretically places defence spending in with welfare and health as “non-revenue generating payments” that are growing faster than GDP — not exactly consistent with one of the pillars of the government’s economic policy, defence protectionism. And are Shepherd et al thinking of a domestic reservation policy when the review asks “why would we export coal and gas to power the world but not use it at home? … Australia’s second and third exports should not become affordable indulgences only away from home.”

Pity we’ll have to wait til mid-year to learn the answers to such pressing questions. 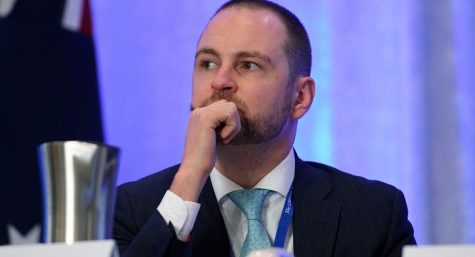 Some things should not be looked at closely

This is why I subscribe to Crikey. Who else is going to shine the light on these kind of carpetbaggers?

I assumed that it was due to his oleaginous nature.

Isn’t Tony Shephard thoroughly discredited?
He justified a Medicare co-payment by saying we visit the doctor 11 times a year and “we’re not that crook!”
Only he was wrong:
http://www.abc.net.au/news/2014-05-13/tony-shepherd-incorrect-doctor-visits/5436706