Crikey Worm: Preparations for Cyclone Debbie, bad polls for the PM, and no bias at the ABC

North Queensland prepares for Cyclone Debbie, more bad polls for the PM, and Adelaide makes history in the AFLW. It's the news you need to know, by Sally Whyte and Max Chalmers.

Residents of North Queensland are preparing for the landfall of Tropical Cyclone Debbie, with the Bureau of Meteorology warning the cyclone will be the worst to hit the state since Cyclone Yasi in 2011. Debbie is expected to hit land on Tuesday morning as a category four system and evacuation orders are in place for towns in the projected path of Cyclone Debbie, and many schools have cancelled classes today. The Townsville Bulletin reports cyclonic winds could be felt in the city from as early as 4pm today.

NOT A GOOD START TO THE WEEK FOR TURNBULL

Today’s Fairfax Ipsos poll is not good news for Prime Minister Malcolm Turnbull, with Labor leading on a two-party preferred basis 55% to the government’s 45%.

In other news out of Canberra, Turnbull has ordered the Australian Competition and Consumer Commission (ACCC) to investigate power prices on the country’s east coast, with the report not due until June 30 next year. In a statement with Treasurer Scott Morrison, the PM said regulation, intervention or use of enforcement powers would be considered by the government, depending on the findings?:

“In responding to the ACCC’s review, the Turnbull government will consider what further action should be taken by policy makers and regulators to ensure markets are competitive and energy consumers, both residential and business, can have confidence in the reliability, security, pricing and terms and conditions of supply.”

Meanwhile, crossbench Senator Nick Xenophon says he won’t vote on company tax cuts until the country’s “energy crisis” is sorted out, and Pauline Hanson says One Nation senators will go on strike until a dispute involving Queensland sugarcane growers is resolved.

Chinese academic Chongyi Feng has been blocked from leaving China for two days in a row, sparking concern among his colleagues. Feng is an Australian permanent resident and associate professor of China Studies at the University of Technology Sydney. The Sydney Morning Herald reports: “Chinese lawyers who had been in contact with Professor Feng said he had been stopped from leaving China by police who had accused him of threatening state security.” Justice Minister Michael Keenan told the paper: “We’ll continue to monitor the situation and remain in contact with Chinese authorities about it.”

“I don’t come to the job thinking I need to fix the perceived bias in the ABC because I don’t know that there really is a bias, but I imagin­e scrutiny of the ABC will continue — and so it should.” That’s new ABC chairman Justin Milne in his first interview in the role, telling The Australian he doesn’t think he needs to address bias at the national broadcaster, because it isn’t a problem.

Darwin: The Royal Commission into the Protection and Detention of Children continues public hearings, with two former assistant managers of the Don Dale Youth Detention Centre to give evidence.

Morwell: The first step in the progressive shutdown of the Hazelwood power station begins today, with three of the eight generators closing.

Dharamsala, India: Day three of the final test match of Australia’s tour of India will start with the home side on 6/248.

Heyfield mill: Federal move to save timber mill from closure

THE WEEKEND IN SPORT: HISTORY MADE

The Adelaide Crows won the first ever AFLW grand final over the Brisbane Lions, with the final score 35 to 29. Co-captain Erin Phillips (pictured) was best on ground. In India, Nathan Lyon took four wickets for just 36 runs, putting Australia in a good position leading into day three of the fourth test match. And it wasn’t a successful home Grand Prix for Formula One driver Daniel Ricciardo, who didn’t finish the race in Melbourne due to engine trouble. Sebastian Vettel won the race for Ferrari. 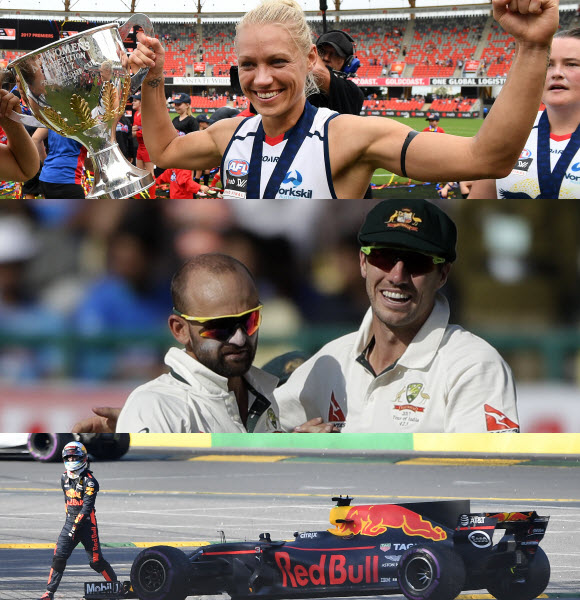 Chinese indulge in a relationship of contradictions — Greg Sheridan (The Australian $): “Under the extraordinarily ill-advised extradition treaty, signed in the dying days of the Howard government but unratified all these years, permanent residents and Australian citizens could be extradited to China to face ­charges.”

Why I’ve stepped back into public life — Julia Gillard (Sydney Morning Herald): “Of course, this now means I am entering a new phase in my post prime ministerial life. Until now, I have been content to go about the things I am doing quietly, with limited media exposure. Now that will change.”

ASIC needs more power over white-collar criminals, according to Senate — Adele Ferguson (Australian Financial Review $): “Confiscating the profits from corporate wrongdoing is available to regulators in Canada, Hong Kong, Britain and the United States, but not here.”

This energy may be clean but banks won’t back coal-fired plants — Rob Henderson (The Australian $”Taking into account all of these risks, coupled with the difficulty in offsetting them via the market or through portfolio diversification, and the multitude of uncertainties surrounding any proposals for a clean-coal generator, we should assume that no bank funding will be forthcoming for clean coal- fired power stations.”

While Donald Trump recently tweeted to his followers “do not worry”, the President has little to be happy about after a weekend of rumination and recrimination. Trump faces a hold-up to his agenda after Republicans failed to reach consensus on a bill to repeal and replace Obamacare last week, with the bill being pulled before it could be voted down in the House of Representatives. Trump tried to blame Democrats but also hit out at conservative Republicans in a tweet today.

Trump and top administration figures have hinted they may be looking to immediately move on to tax reform but the healthcare stumble will complicate that. Saving intended to free up funds for tax cuts have not been legislated, as originally planned.

Details about a US airstrike that allegedly killed scores of people in Mosul remain foggy, with the Iraqi army claiming bodies found in a building were killed by an ISIS booby trap, not a US strike. US Central Command has confirmed an airstrike took place on March 17 “at the location corresponding to allegations of civilian casualties” and that it is investigating. — BBC

Carrie Lam has been chosen as Hong Kong’s new chief executive by the 1200-person body responsible for selecting the island’s leader. Lam is thought to be less popular than at least one rival who sought the position but benefited from her ties to Beijing, a sore point for pro-democracy forces on the island, as well as those who desire more independence from China. — Reuters

Former Egyptian dictator Hosni Mubarak has been freed after six years of detention. Chased from power during the country’s 2011 revolution, Mubarak was recently cleared of charges relating to the deaths of 239 people during Arab Spring demonstrations. He has returned to his home in Cairo. — The Guardian

Who stopped the Republican health bill? (New York Times): “Thirty-three Republicans who would not budge from their decisions to vote ‘no’ on the health care bill were key to causing its collapse. They can be divided into three broad categories.”

Why smoking is still so widespread (The Economist): “More than 50 years after it became clear that smoking kills, the habit remains the leading preventable cause of death, with an annual toll of nearly 6m lives.”

New ACTU secretary Sally McManus on the new IR battlegrounds (The Saturday Paper): “Some in the labour movement murmur that perhaps it wasn’t the wisest decision to subject herself to such a long and notoriously tough interview on her first day. But the new ACTU secretary, the first woman elected to the position, proudly of working-class parentage and from the movement’s left, is not resiling from her decisions.”