Transcripts of One Nation's letters and emails to candidates reveal the party's strange, authoritarian inner workings.

Candidates running under the banner of Pauline Hanson’s One Nation during the recent Western Australian state election faced summary dismissal if they were deemed not to be team players, or attempted to stand up for their own views and interests.

A letter from Senator Pauline Hanson, that was sent to the remaining candidates in WA after the disendorsement of Dane Sorensen, stated that she cast out Sorensen during a phone call.

Sorensen had no idea that Hanson was listening in on the conversation he was having with Hanson’s senior adviser James Ashby.

“Today I listened to a telephone conversation Dane Sorensen had with James. I was not impressed with his language, his attitude and he had no intention of waiting for the party’s ‘how to vote’ cards but printed his own that were very unprofessional and not authorised by the party,” Hanson said. “This would have put us in a difficult position with the Electoral Commission.”

Sorensen also annoyed party administrators by giving Ron McLean and Marye Daniels the authorisation to look over his how-to-vote cards. McLean and Daniels were long-term Hanson loyalists dumped without notice from their roles of president and secretary respectively.

Daniels, 79, and McLean, 87, are currently engaged in legal action against PHON — alleging that McLean suffered age discrimination when he was dropped from the list of candidates.

Hanson emailed the remaining WA candidates, saying that McLean and Daniels no longer held the interim roles of state president and state secretary of the party. In Hanson’s view, they were not entitled to fulfil any official posts.

“After listening to Dane Sorensen, I was left with no option but to disendorse him as the One Nation candidate, which I informed him of during that same telephone hook-up. He will now run as an independent, even though his name will still be noted as a One Nation candidate on the ballot paper,” Hanson told candidates in that missive from the leader’s desk.

Another former candidate, Sandy Baraiolo, received a letter from Hanson accusing her of responding belligerently to instructions issued by James Ashby and Aidan Nagle, One Nation’s national membership manager, on her Facebook activity.

“On Saturday 18 February 2017, you were notified via email that a secondary Facebook set up in your name was not authorised by the party for use and you were instructed to completely un-publish and remove the secondary account,” Hanson wrote.

“At the date of this letter you continue to act belligerently in respect of both matters. You have been asked a number of times to complete a number of tasks in relation to satisfying these requests and have been unable to complete or cooperate with the team on them.”

It is clear from other correspondence sent by Baraiolo to the team at PHON that she had complied with the request to delete unauthorised pages; however, Facebook deleted pages 14 days after the lodgement of a shutdown request.

The speed of Facebook page deletion is something that Baraiolo did not have control over. She confirmed that she had requested the offending pages to be deleted on February 20, only to be disendorsed two days later.

Hanson’s letter, kicking Baraiolo off the list of endorsed PHON candidates, had two attachments. The first was a transcript of a teleconference, during which Baraiolo had an exchange with Ashby and Nagle, addressing issues related to the maintenance of Facebook pages.

Even this brief transcript gives a great insight into the inner workings of One Nation’s communication with candidates. The “party rep” described in the transcript is Aidan Nagle, who was responsible for liaising with candidates about their social media presence.

During the teleconference, James Ashby told Baraiolo that her status would be altered from an administrator of the Facebook page to that of an editor — stating that only administrators within the party can be administrators of Facebook pages. Baraiolo said she was not happy with being only an editor, and that she had spoken to Ashby about the matter earlier that day.

“I’m going to make it really clear and I’ve got Pauline here as well, Sandy, you won’t be made an administrator,” Ashby said. “We have a real candid rule for all candidates: you can be an editor but no one is an administrator except for administration people within One Nation Party.” 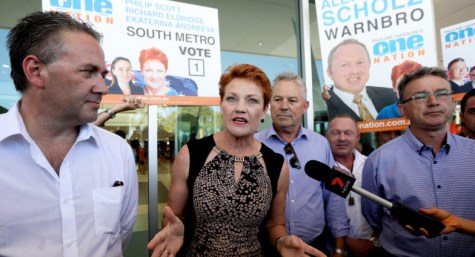