The man police believe carried out yesterday’s deadly attack outside the British Houses of Parliament in Westminster, London has been named as Khalid Masood, a British born 52-year-old believed to have been living in the West Midlands. He was subject to no current investigations, but had been charged with a litany of previous offences dating back to 1983. Eight arrests have been made across London and Birmingham on suspicion for preparation of a terrorist attack.

Prime Minister Malcolm Turnbull has dubbed the terror incident as “an attack on parliaments, freedom and democracy everywhere in the world.” The prime minister reassured Australians that the country’s own agencies were working “relentlessly and tirelessly to keep our people safe”.

Not all MPs struck the same tone. In a video posted online, Pauline Hanson used the incident to attack London’s Muslim mayor Sadiq Khan and implore Australians to “Pray4MuslimBan”.

ABBOTT COMES OUT OF THE HAZELWOOD WORK

The Australian Industry Group will today call on the federal government to find a last minute deal to keep Victoria’s Hazelwood brown coal power station open, a move that would shore up energy supply but require a pretty $750 million and increase carbon emissions.

The Victorian government isn’t interested, although The Australian reports some federal government backbenchers and minor ministers are. According to the story, Malcolm Turnbull and Treasurer Scott Morrison slapped down the idea.

You’ll never guess who just happens to be in the Herald Sun today with an opinion piece in favour of keeping the power station open. “At least until Snowy 2.0 can produce 2000 megawatts of cost-effective and droughtproof hydro power, Hazelwood should stay open,” writes Tony Abbott.

Housing will be high on the agenda when state treasurers meet with Scott Morrison today. Victorian Treasurer Tim Pallas is urging a rethink on the government’s opposition to CGT and negative gearing changes.

Researchers at the University of Adelaide have their own suggestion, with new research indicating “shared equity schemes” could have a role to play in increasing home ownership. The policy enables government or private investors to cover 25% of a homebuyers mortgage and receive an equivalent cut of the profits or losses when the house is eventually sold.

Chinese Premier Li Keqiang used his first day in Australia to warn against splitting the world into “sides”, as occurred during the Cold War. Despite infusing his comments with humour, Li made a gentle allusion to the heated dispute in the South China Sea, reassuring his hosts that “We stand ready to work with Australia for peace in our region for maritime navigation freedom and the freedom of over-flight and we will continue to do that.”

Sydney: The Pentecostal church goes before the Royal Commission into institutional responses to child sexual abuse, with Hillsong founder Brian Houston to give evidence.

London terror attack: ritual embraces common bonds  — Denis Shanahan (The Australian):  “Westminster and its environs mean a great deal to Australians, who have trooped past as tourists for generations, but it means so much more for our parliament and Australian values. As MPs queued to give their condolences to British high commissioner Menna Raw­lings, on the floor of the parliament Malcolm Turnbull and the Opposition Leader were as one on the contribution politically and ­culturally of Britain to Australia.”

What’s the delay with the Gargasoulas trial? — Michael Bachelard (The Sydney Morning Herald): “Well before Gargasoulas allegedly took his fateful turn onto Melbourne’s busiest pedestrian mall on January 20, police had been watching him closely — though arguably not closely enough. What happened that day is, in other words, a well-known quantity. So why, as the Director of Public Prosecutions, John Champion, QC, recently told the Supreme Court, is this “a very complex” case that could take years to get to court?”

Luke Foley in the running as Labor hits its electoral sweet spot — Sean Nicholls (The Age): “When Barry O’Farrell took power in a landslide in 2011, so emphatic was his victory over Labor’s Kristina Keneally that the Coalition was being tipped to be in power for three terms, at least. Yet there are strong signs we are in for a tight contest in 2019 as Labor seeks to build on gains in made in 2015, when Foley was set the Herculean task of wrestling power from a popular Mike Baird after just a few months as opposition leader.”

Denis Voronenkov, a former Russian MP who had fled to Ukraine, has been assassinated in central Kiev on Thursday. Ukraine’s president Petro Poroshenko has labelled the killing “state terrorism”. Voronenkov was an outspoken critic of Vladimir Putin and Kremlin policies. Poroshenko has pointed the finger at Russian authorities. Voronenkov fled Russia in 2016 and had been granted Ukrainian citizenship. — The Guardian

In scenes reminiscent of those in London, a man is being held after driving a car at speed into a pedestrianised street in in the Belgian port city of Antwerp, forcing people to jump out of its path. The incident left no one injured. Knives and a canister filled with an unknown substance were found in the car, according to a statement from the Belgian federal prosecutors’ office. — Reuters

Donald Trump‘s controversial healthcare laws are in trouble after conservative House Republicans rejected an offer to shift his plan even further to the right, raising doubts about whether House Speaker Paul Ryan has the votes to pass the bill. The Washington Post reports that 37 House Republicans, mostly members of the conservative Freedom Caucus, have announced their opposition to the bill, known as the American Health Care Act. Ryan can only afford to lose 22 Republican votes if the bill is to pass, but Press Secretary Sean Spicer insisted that it will.

Meanwhile, key Democrats in the Senate have vowed to block Trump’s US Supreme Court pick Neil Gorsuch. Senate Minority Leader Chuck Schumer and Sen. Bob Casey both said Thursday they’d vote no on Gorsuch’s nomination.  This is a blow to Republicans, who  need at least 60 votes to have Gorsuch confirmed — there are only 52 GOP members in the chamber. The Senate Judiciary Committee is holding another round of hearings today, with 28 outside witnesses testifying for and against Gorsuch’s nomination.

The Gig Economy Celebrates Working Yourself to Death (The New Yorker): “It’s a stretch to feel cheerful at all about the Fiverr marketplace, perusing the thousands of listings of people who will record any song, make any happy-birthday video, or design any book cover for five dollars. I’d guess that plenty of the people who advertise services on Fiverr would accept some “whiteboarding” in exchange for employer-sponsored health insurance.”

When Feelings About Money Have Nothing to Do With Actual Finances (The Atlantic): “The changing views on money line up directly with the presidential swap. To conduct their poll, Gallup asks Americans 13 questions about their personal finances on a daily basis. Through that technique, they can pinpoint when sentiments started to change. While Republicans and Democrats started slightly shifting their perceptions about their finances in November, as soon as Donald Trump won the presidency, the positivity of Republicans didn’t far surpass that of Democrats until February—Trump’s first full month in office.”

The Last London (The London Review of Books): “Lastness reverberates. That impulse towards wiping the slate clean and starting over. ‘London was, but is no more.’ John Evelyn writing, after the Great Fire, with such relish in his plain statement of fact. ‘London was, but is no more.’ It reminds me of hearing Ian Holloway, the manager of Queen’s Park Rangers, on the radio. He’s got a nice West Country burr, very soothing for his employers. He was talking about his club’s horrible run of form when he said, with disarming optimism, ‘I think we’re right on the crest of a slump.’ “ 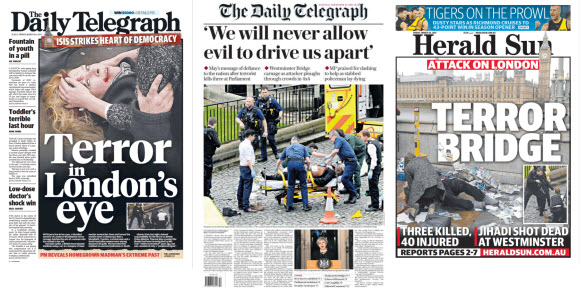