Right to bare arms. The dress code for the House of Representatives, set in 1999 by then-speaker Neil Andrew and reinforced in 2005, requires men in the chamber to wear good trousers, a jacket, a collar, and a tie — a safari suit is also included as an option. Women are also expected to have a similar level of formality in their clothing choices.

There are exceptions, such as if the air-conditioning is broken or a member is rushing to a division and forgot their jacket, but otherwise it is jackets on.

The rules apply to the press gallery, too, and recently ABC journalist Patricia Karvelas was asked to leave the gallery in the House of Representatives because she was wearing a sleeveless top.

In the Senate, the rules were relaxed after a formal request from then-Greens senator Bob Brown. And Greens MP Adam Bandt recently wrote to speaker Tony Smith asking to relax the rules for journalists to be able to work through the hot summer sans jackets after a request from a photographer.

“As temperatures continue to rise, so too will the body temperature of journalists — who are regularly required to be physically active and who are required to work inside and outside the building,” Bandt said in a statement to Crikey. “Journalists and especially photographers should have a right to bare arms.”

Wilson spoke at right-wing event too. Tomorrow when Australian Human Rights Commission President Gillian Triggs is hauled again before a Senate committee to talk about the Bill Leak complaint, it is expected that one of the Liberal members of the committee will demand answers from Triggs on why she is going to Tasmania to give a speech at the Hobart Oration, an event hosted by the Bob Brown Foundation. As Crikey has previously pointed out, the event is not a fundraiser ($50 tickets don’t even break even) nor associated with a political party, despite what the Daily Tele has claimed, and outrage over it ignored that Tim Wilson, back when he was Human Rights Commissioner spoke at Liberal Party branch events. A tipster today forwarded us this event attended by Wilson while still at the commission back in 2015 for the right-wing group Australian Taxpayers Alliance and the Australian Liberty Alliance. Tickets were much more expensive at this event, at $300. 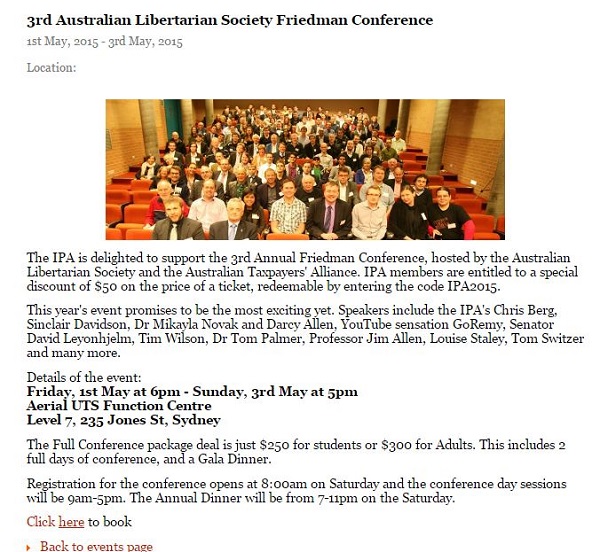 Those super keen freedom fans could, however, have paid $700 for the up-close and personal experience with the Human Rights Commissioner:

“Plus, for our most committed supporters, we are offering a VIP package which includes an exclusive VIP reception, a private luncheon with guest speakers and other dignitaries, preferred seating, and a DVD of all conference sessions & Liberty Awards. For only $700, the VIP package is an excellent opportunity to enhance your experience while helping us ensure the best possible conference.”

Body account. The power struggle over governance at CPA Australia, one of the country’s biggest accounting bodies, looks like it is in no way slowing down. CPA Australia’s board and senior management can’t keep governance campaigner Brett Stevenson down. Stevenson is leading the charge against the board and CPA boss Alex Malley, using an email list of members. In his 15th such email to members, sent this morning, he calls for heads to roll at CPA Australia with continuing revelations about the way which the largest of Australia’s accounting bodies is engaged in damage control.

Some might call it “stakeholder management”. Yesterday Stevenson revealed to his contact list another email, from CPA chief operating officer of member services Jeff Hughes, in which Hughes encouraged team members liaising with various chairs of committees and other so-called “friendlies” to circulate a 17-page memo written to counter the criticisms levelled by Stevenson at the organisation. Page 17 has a crack at The Australian Financial Review and the manner in which it has covered various issues related to the marketing spend, the heavy focus on chief executive officer Alex Malley in marketing and promotion and the level of remuneration paid to board members and executives. Stevenson has stated in an earlier email that the total aggregated remuneration for those in charge at the bean-counters’ club is $5.5 million and that disclosure should be broken down into amounts paid per relevant office bearer.

The accounting body has also taken steps to curb debate on its LinkedIn forum and shut down its “Find A CPA” search tool on its website to prevent members being able to build a mailing list to communicate with other members about concerns.

Guthrie schmoozes with pollies. As the ABC cuts more than 200 jobs for a content fund, ABC MD Michelle Guthrie has told politicians that the national broadcaster needs to “free up investment” to try its hand at new things. Guthrie was in Canberra yesterday evening to launch a new parliamentary friendship group devoted to the ABC.

“It’s lovely having friends. When you deal with the Chinese government they particularly refer to you as … old friends. It’s even better to have old friends,” she said.

Guthrie reiterated previous statements about the need for the ABC to remain relevant, and attract the 18-45 demographic, particularly in regional areas. The change would not be “another microphone in Federation Square or Martin Place” but telling stories in places like Yackandandah or Mallacoota.

“I think we need to free up investment to try new things. Not everything is going to work. I can’t guarantee everything you will like,” she told parliamentarians.

Ms Tips’ spy didn’t spot Justin Milne, the man widely tipped to be the new ABC chair, but Guthrie stuck around for a couple of hours at the event chatting to politicians of all persuasions.

Kroger’s gesture won’t change outcome. It looks likely that Victorian Liberal party president Michael Kroger will ask the party’s administration committee to re-open nominations for the position of president today, following the news that his challenger Peter Reith had suffered a stroke. Reith was taken to hospital yesterday and has withdrawn from the process, which has surfaced deep divisions within the Victorian branch of the Liberal party. Victorian Liberal leader Matthew Guy had supported Reith in his challenge, while federal MPs have been divided between Kroger and Reith. Even though Kroger looks like he will make a democratic move to open up the process, it’s believed that there is no one obvious to run against him now that Reith will not, so he will still end up retaining the presidency.

So how much has Guthrie got, to play her fetish-roulette with?