Four people are dead after an attack on the UK Parliament, which police say they are treating as a terrorist attack. It's the news you need to know, by Max Chalmers and Charlie Lewis.

Four are dead and at least 20 injured following a suspected terror attack outside the British Houses of Parliament in Westminster, London. One of the victims was killed when a car ploughed into civilians on Westminster bridge, before the attacker stabbed a police officer in what’s being described as a “marauding attack”. The officer and a man believed to be the attacker are among the dead. Westminster will remain locked down until Scotland Yard is certain the threat has been contained. Acting Deputy Commissioner and head of counter terrorism at the Metropolitan Police, Mark Rowley, told the BBC a major terrorist investigation was now under way.

The government has struck a deal with Senate crossbenchers to pass its long delayed childcare reforms, removing the measure from its shelved omnibus savings bill. Nick Xenophon Team and One Nation senators agreed to support the separate bill to be funded with a two-year freeze on family tax benefit (FTB) increases. An overall $4 billion in savings stashed in the rest of the omnibus bill remain parked for now.

The government says the new, simplified childcare rebate will benefit lower income families. Labor has responded by arguing the freeze on increases to FTB will leave families worse off.

With budget commitments freezing left, right, and centre, the business community is increasingly wary the government could drop its signature company tax cuts. According to a report in The Australian, the government is poised to split that measure in two, freezing cuts for larger companies while attempting to legislate a cut for businesses with less than $10 million turnover.

A 100-strong delegation from China may be in town but Foreign Minister Julie Bishop has skipped out, opting instead to join talks bringing together a coalition of anti-ISIS groups in Washington, D.C.

Talks between Chinese Premier Li Keqiang and the federal cabinet this week will focus mostly on trade and also include discussions of the South China Sea and North Korea’s missile program, reports the Australian Financial Review. In an op-ed in the same paper, Prime Minister Malcolm Turnbull says: “Premier Li and I will discuss the importance of ensuring that all regional disagreements, including those in the South China Sea, are resolved by negotiation and in accordance with international law.”

A report out today from the Australian Institute of Superannuation Trustees says the increasing cost of housing for retirees could harm the budget by eating up super, pushing more people onto the pension, and increasing the demand for rental assistance. The report’s author Saul Eslake urged the government to focus on housing supply and alter tax concessions, while calling the recently floated idea to allow super to be unlocked for home buyers “a bad idea”.

JOYCE SPEAKS A LITTLE TOO FREELY

The Deputy PM Barnaby Joyce has given his colleagues a spray for catering to fringe backers by focusing on section 18c. “It is definitely not the issue people are talking about in the beer garden on Friday night or at the counters of banks, or to be quite frank, in the big office blocks when they finish work on Friday night,” Joyce told Fairfax.

Melbourne: The Victorian parliament audit committee is expected to table a report on secondary residence allowance claims by Telmo Languiller and Don Nardella.

As Reith recovers from stroke, Guy must wear fallout of his machinations — John Ferguson (The Australian):  “Peter Reith will be the first to understand that his illness, as deeply lamentable as it is, has broad political implications. On the balance of probabilities, Michael Kroger will retain the presidency of the Victorian division, leaving state leader Matthew Guy horribly exposed, along with the federal ministers who so stridently opposed the incumbent.”

Malcolm Turnbull, Scott Morrison cannot afford a Budget bombshell–James Campbell (The Herald Sun):”Back in those early days of Abbott time, when he had responsibility for stopping the boats, Morrison was generally regarded as the standout star minister of the new government. He then had a spell as social services minister but through no fault of his own wasn’t there long enough to have had much impact”

We must seize the chance to save public funds on childcare — Judith Sloan  (The Australian): “Don’t believe the government is really reforming the childcare sector; that’s just a smokescreen to chase votes. The reference price to be used to establish the subsidies will be set too high, so all those centres outside central Melbourne and Sydney will have an incentive to increase fees while inner-city parents will squeal.”

How Turnbull can kill stamp duty and produce a budget to remember — Peter Martin (The Age): “It can be seen straight away that cutting income tax in order to push up the GST won’t do much, which is why Turnbull junked the idea. A slow cut in company tax paid for by a slow increase in income tax facilitated by bracket creep (which is essentially what the government is proposing) won’t achieve that much either, despite the rhetoric about jobs and growth.”

Thirty-three people (including “dozens of civilians”) have been killed in an airstrike by the US-led coalition against Islamic State on a school — being used as a refugee shelter — west of the Syrian city of Raqqa. The strike, in combination with a similar US attack on a mosque complex in the north-west of the country last Saturday that killed at least 52 people, has increased fears that a White House-ordered review of rules of engagements may be responsible for increasing civilian casualties. — The Guardian

Police in Chicago  are questioning several individuals on Wednesday following the gang rape of a teenage girl that was broadcast on Facebook Live. The victim, a 15-year-old girl who went missing on Sunday, was found on Tuesday and taken to a children’s hospital for treatment. The assault joins a series of recent incidents that have been live streamed on Facebook, including the kidnapping and torture of a disabled 18-year-old. — Al Jazeera

The US Secret Service has requested an extra $60 million in funding for the next year, according to documents reviewed by The Washington Post. $26.8 million of this would go towards protecting Trump Tower, President Donald Trump’s family and private home in New York.  The documents reflect the challenges and costs of guarding the sprawling Trump clan and accommodating their frequent travel. The Post report also notes the potential for these revelations to be awkward in light of the sweeping federal cuts that would be implemented under Trump’s first budget.

In statements that have been latched onto by the White House as evidence that Trump’s twitter spree claiming to have been wire tapped by the Obama administration was in fact correct, The Republican chairman of the House Intelligence Committee, Devin Nunes, has said American intelligence agencies may have “incidentally” picked up communications of Trump transition team members. But The New York Times notes that the data collection described in Nunes’ statement indicates that the targets of American intelligence gathering were foreign officials, not Trump or specific members of his team.

Millions of educated Russians flee Putin’s Russia (Newsweek Europe): “Harsh repression of civil society, sparse economic opportunity and the lack of an independent media have contributed to this exodus … ‘The very individuals who should be staying in Russia … to make it a great power in the economic sense, those are the individuals who are abandoning their country’.”

Holocaust denial and the marketplace of ideas (The Times Literary Supplement): “Anyone who wants to understand the current spate of fake news and fake history must go back some years to its most extreme modern manifestation: Holocaust denial.  An entire industry has been built to legitimize Holocaust denial.  The deniers have funded ‘research’ ‘institutes’, ‘journals’, books, magazines, videos, websites, newsflashes — all designed to provide a patina of academic respectability to demonstrable falsehoods.”

Can we know what animals are thinking? (The Economist): “In 1992, at Tangalooma, off the coast of Queensland, people began to throw fish into the water for the local wild dolphins to eat. In 1998, the dolphins began to feed the humans, throwing fish up onto the jetty for them. The humans thought they were having a bit of fun feeding the animals. What, if anything, did the dolphins think?” 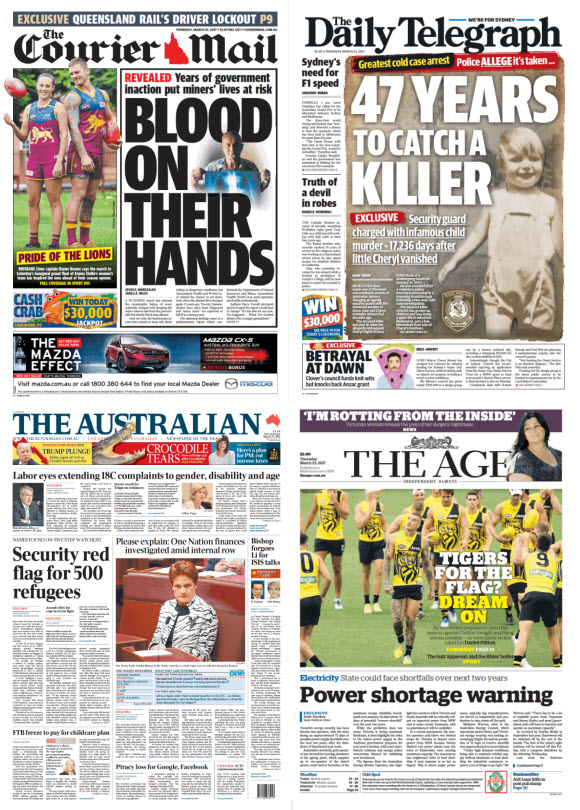