Healthy competition? Despite Deputy Prime Minister Barnaby Joyce extolling the virtues of the New South Wales town of Armidale, where the Australian Pesticides and Veterinary Medicines Authority bureaucrats are being moved (or quitting instead of being moved), we hear not all his parliamentary colleagues are quite so enamoured with the area. As part of an announcement on a community soccer program for homeless people this morning, Health Minister Greg Hunt, the “best minister in the world“, led a team of parliamentarians in a round robin match against a team of public servants from the Department of Health, and the bureaucrats came out on top. Hunt reportedly joked that he would send the department out to the wilds of Armidale as a response to the loss. We have no information about the scoreline, so we can’t speculate on how many departmental employees were foolhardy enough to put a goal past the man who decides their funding.

For when once a day isn’t enough. For those who have ever sat through question time and for whatever reason thought it would be a good idea to participate, the second edition of Question Time!, the board game, launched in the Parliament House gift shop today.

The first edition was launched in 2013, but the creators have decided to update the game, replacing the plastic tokens with members of Parliament. Ms Tips notes that although the board game is set in the House of Representatives, some of the characters you can choose to play are senators, including Senator Pat Dodson and Senator Pauline Hanson. Politics nerds wanting to get it will have to fork out $100.

ABC boss defends changes to staff. ABC managing director Michelle Guthrie has sought to ease concerns about the restructure that will leave 200 employees redundant at the national broadcaster and to separate the cuts from the new content fund that is the carrot to sweeten the deal for staff. In an email to all staff yesterday, Guthrie pointed to the fact that the process that will lead to job losses is ongoing, and the content fund to which money is being diverted is overwhelmingly competitive. She also linked the job losses to meeting funding cuts from the 2014 federal budget. This comes after Guthrie told a Senate estimates committee that she didn’t think it was part of her job to lobby for extra funding for the ABC. Guthrie said:

“Redundancies are difficult for any organisation. However, in this case they are necessary for the ABC to meet its budget responsibilities following the cuts made by the Government in 2014. As I said in my announcement, this is part of the ongoing work to meet efficiency targets, reduce fixed costs and free up additional funds, they are not a result of the new strategy and Content Fund.”

But Leigh’s methodology was quickly shut down, with Rear Window’s Joe Aston writing a take-down and Peter Martin, The Age‘s economics editor, filing a critique a couple of days later.

The Herald issued a broad correction in yesterday’s paper, and has updated the online version of the article with the correction and linking to Martin’s analysis, which opens, “Andrew Leigh is wrong”.

But if you only read the hard copy paper, you might struggle to remember who it was who didn’t quite have his facts straight; the correction names the headline but not the author of the article. We thought we better make it clear. 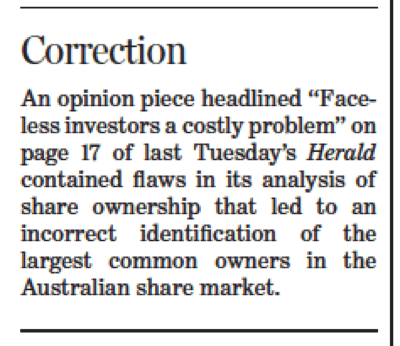 Bored games – “replacing the plastic tokens with members of Parliament”? What’s the difference….?

Perhaps the plastics would be better performers? Worse is not possible.

The blatantly false premise in Andrew Leigh’s article also raises some pretty serious questions about the competence of the SMH editors, who should have sufficient topic knowledge to know this was bogus.