Why are conservatives singling out Alan Joyce over gay marriage?

There are 20 CEOs who signed the letter asking the government to legislate in favour of marriage equality — but just one is named over and over again by conservative columnists looking to discredit those who dare to say marriage equality would be good for business. After taking aim at Telstra for supporting marriage equality while failing to fix his home phone, Immigration Minister Peter Dutton turned his attack to Qantas’ Alan Joyce — a favourite target of News Corp columnist Miranda Devine. Today Devine wrote about how many of the CEOs are from overseas — singling out Irish-born Alan Joyce in the lead.

Devine isn’t the only one to have a go at Joyce; The Courier Mail‘s Des Houghton writes today that he will never fly Qantas again: “I have some news for you Mr Joyce: You can leap around like a leprechaun all you like but Australians have already voted for a plebiscite on same-sex marriage at the last federal election.”

Piers Akerman goes hard on Joyce, saying he is pushing his personal views on the government:

“Today, if we are to believe Qantas CEO Alan Joyce, the airline is more interested in putting the interests of the homosexual minority front and centre of its operations, painting an aircraft in the rainbow colours of the sexually confused, sponsoring a float in the annual homosexual parade on Sydney’s Oxford Street, and pushing Joyce’s personal views on the elected government.”

Why are no other CEOs named? Is it because Joyce is gay (and gasp! born overseas, much like Tony Abbott) and also lobbying for marriage equality? Six years ago, Andrew Bolt loved Joyce (and that he was gay) during Qantas’ industrial disputes with its workers, writing that Joyce broke stereotypes of “effete, flighty and soft” gay men:

“But good luck for the rest of us that we got a lesson on the stupidity of stereotyping people. Not least of gays. … But there’s one other stereotype Joyce smashed. This tough, cool union-buster is also gay, sharing his life with a New Zealand man. What a fine challenge to the notion of gays as effete, flighty and soft — a straitjacketing that limited the media careers of gay friends, keener to talk politics than showbiz. And, again, what a rejection of the role Labor wrote for Joyce as a Liberal zealot, conspiring with Tony Abbott. Stupid stereotypes. How they kill our possibilities. How they dull our reason.”

Perhaps we shouldn’t stereotype conservative columnists, but it looks like homophobia and racism are coming out to play — hidden by claims of fighting “political correctness”. 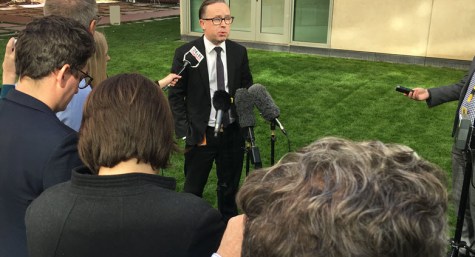 The courier mail’s Des Houghton should understand that we have TWO houses of parliament and therefore the Australian people chose to vote for a block on the plebiscite with good reason (Not binding hideously expensive and completely unnecessary, human rights should never be subject to a majority vote).

Does the Courier Mail now allow overtly racist insults (calling Joyce a leprauchaun) to be printed in its newspaper? This is shameful and embarrassing. Is this what we’ve come to as a country? Allowing deliberately ill informed racists to sway opinion?

Well, the Courier-Mail **is** shameful and embarrassing. At least I now know I can avoid sharing an aeroplane with Houghton simply by choosing a QF flight …

Good point, and why does Crikey need to keep us informed of Akerman’s unbelievably ugly opinions on anything? I really look forward to his morbid obesity catching up with him, the world will be a better place.

The Curmudgeon
Reply to  Zeke

Time for Joyce to initiate an 18C case?

We know when a political party is on the back foot, they go personal ie Alan Joyce, gay is the target at the moment personally plucked out of a group of people. Julia Gilliard had a dreadful time with Abbott and Hockey etc. They said such derogatory crude things about her because she was a woman and I believe this was the beginning of what is now the Tony Abbott negativity in government.