What is it about Joyce? ... goss from the Quills ... Jillian Skinner replacement raises eyebrows ...

Dog whistling on Alan Joyce. There are 20 CEOs who signed the letter asking the government to legislate in favour of marriage equality — but just one is named over and over again by conservative columnists looking to discredit those who dare to say marriage equality would be good for business. After taking aim at Telstra for supporting marriage equality while failing to fix his home phone, Immigration Minister Peter Dutton turned his attack to Qantas’ Alan Joyce — a favourite target of News Corp columnist Miranda Devine. Today Devine wrote about how many of the CEOs are from overseas — singling out Irish-born Alan Joyce in the lead.

Devine isn’t the only one to have a go at Joyce; The Courier Mail‘s Des Houghton writes today that he will never fly Qantas again: “I have some news for you Mr Joyce: You can leap around like a leprechaun all you like but Australians have already voted for a plebiscite on same-sex marriage at the last federal election.”

Piers Akerman goes hard on Joyce, saying he is pushing his personal views on the government:

“Today, if we are to believe Qantas CEO Alan Joyce, the airline is more interested in putting the interests of the homosexual minority front and centre of its operations, painting an aircraft in the rainbow colours of the sexually confused, sponsoring a float in the annual homosexual parade on Sydney’s Oxford Street, and pushing Joyce’s personal views on the elected government.”

Why are no other CEOs named? Is it because Joyce is gay (and gasp! born overseas, much like Tony Abbott) and also lobbying for marriage equality? Six years ago, Akerman loved Joyce (and that he was gay) during Qantas’ industrial disputes with its workers, writing that Joyce broke stereotypes of “effete, flighty and soft” gay men:

“But good luck for the rest of us that we got a lesson on the stupidity of stereotyping people. Not least of gays. … But there’s one other stereotype Joyce smashed. This tough, cool union-buster is also gay, sharing his life with a New Zealand man. What a fine challenge to the notion of gays as effete, flighty and soft — a straitjacketing that limited the media careers of gay friends, keener to talk politics than showbiz. And, again, what a rejection of the role Labor wrote for Joyce as a Liberal zealot, conspiring with Tony Abbott. Stupid stereotypes. How they kill our possibilities. How they dull our reason.”

Perhaps we shouldn’t stereotype conservative columnists, but it looks like homophobia and racism are coming out to play — hidden by claims of fighting “political correctness”.

Scribes’ night of nights. The who’s who of the Victorian media turned out in their finery on Friday night for the annual Quill Awards, celebrating excellence in Victorian journalism. Or at least they tried to turn out — airport delays kept a bigwig from sponsor Virgin from attending, and Four Corners heavy hitter Caro Meldrum-Hanna was, as they say, late to the party as her flight was delayed. Executive producer Sally Neighbour accepted the Graham Perkin Australian Journalist of the Year award on her behalf, with a harried-looking Meldrum-Hanna finally making it to Crown about an hour later to give her acceptance speech. The coveted Gold Quill Award went not to favourite Adele Ferguson (whom Ms Tips likes to think of as Australia’s Meryl Streep when it comes to these things — she won her 10th Quill award last night) but to Louise Milligan and Andy Burns for their 7.30 report on allegations of sexual abuse against Cardinal George Pell. Host Michael Rowland’s dad jokes were a bit much for the audience, but a grand night was had by all, with journos kicking up their heels at Crown’s numerous bars until well into the wee hours.

Where’s the meat? Senator James McGrath has found a less than polite way to thank animal protection body PETA for the gift of vegan sausages, declaring the items on his interests register as “disgusting vegan sausages”. That’s a guaranteed way not to get a second batch delivered! 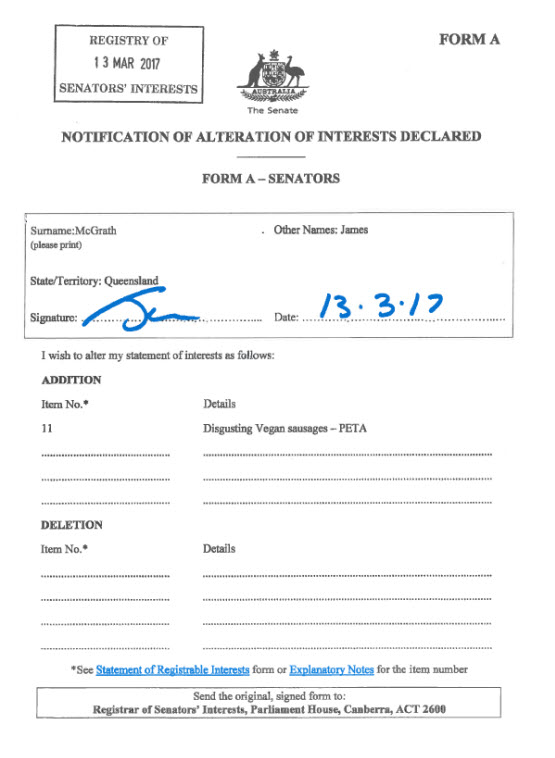 Council amalgamation issue could bite Libs. The NSW Liberals have preselected Felicity Wilson to contest the seat of North Shore at the byelection caused by the retirement of Jillian Skinner. Wilson, now corporate affairs manager at Broadspectrum (formerly known as Transfield), faces a mixed bag of independents also contesting the seat, many campaigning on the issue of forced amalgamation of councils. It’s an issue new NSW Premier Gladys Berejiklian has moved to neutralise by backing down on some mergers in country areas. Wilson may become an easy target for some of her rivals on the issue — she was acting NSW executive director of the Property Council of Australia last year when it made a submission to the NSW government recommending proceeding with the mergers, “compulsorily if necessary”.

Should the government buy — rather than bail out — Qantas?

How much could businesses save if all CEOs took an Alan Joyce-style pay cut?

Des Houghton states he’ll never fly Qantas again. Excellent, it means no risk to Qantas passengers of being seated next to him.

What a great ad for QANTAS.

C’mon, Alan Joyce, ban that twerp Dutton from the Chairman’s Lounge. You know you want to.

Is there a class of individuals more deeply beheld by groupthink than the right wing warriors? Do they get together each morning to work out what they are all going to write?

“Australians have already voted for a plebiscite on same-sex marriage at the last federal election.”

Should I be contacting the electoral commission? I don’t think the polling station I used issued the referendum paper relevant to this to any voters – I certainly didn’t receive one.

I only voted for a local member, and below the line in the senate, neither of which had anything to do with whether I wanted a plebiscite on same-sex marriage or not.

The Crikey Worm this morning quotes Peter Dutton this morning as part of his attack on Alan Joyce saying: “… certainly don’t use an iconic brand and the might of a multibillion-dollar business on issues best left to the judgement of individuals and elected decision-makers.” I suspect that if our elected decision-makers were actually doing the job they were voted-in to do, that company CEO’s would not see the need to advocate such a position.

Is there the slightest chance that Porkerman was having hissown little joke about”flighty” gay men?
Nah, probably not, too subtle.