What Q&A tells us about the ABC’s soul

Peer into the soul of ABC and who would you see? Michelle Guthrie? Leigh Sales? Mr Squiggle? No.

The ABC’s soul — should it happen to have one — looks a quite a bit like Tanya Plibersek, with a large dollop of Josh Frydenberg and a generous pinch of Jacqui Lambie.

That is, if the ABC’s flagship squawk show, Q&A, is a measure of whom the ABC sees as the relevant reflection of the national debate the broadcaster is charged by statute to foment.

We are, it seems, living on Planet Tanya: over the past three seasons, including 2017 so far, she has been on the show no fewer than seven times. Being early in the year, it is reasonable to expect she’ll make eight before the show pulls up for its Thanksgiving-Christmas-Australia Day break. Frydenberg — the Liberal Plibersek? — comes in with six so far and Jacquie Lambie five.

Just for fun, and with only the Science of Counting as back up, Crikey has investigated the vexed question: who gets invited to talk on Q&A — and what does it mean?

Who of our vast and motley array of federal MPs — 150 lower house seats and 76 senators — get to strut their stuff on Monday nights and garner the next day’s headlines?

I can’t stress the simplicity of this exercise. There might be a host of reasons why, say, Julie Bishop (one) doesn’t get on the show as much and Barnaby Joyce (four) does, or why Terri Butler, the ALP member for Griffith, will tonight join Lambie in the Fab Five club.

Some MPs might actually say no. Some might be washing their hair that night. Many might prefer the vicarious pleasure of watching a fellow servant of the public trying to explain away such issues as taxation on tampons.

Nonetheless, who gets to lock eyes with Tony Jones and his blue blue suit makes for an interesting list, an insight to who the national broadcaster thinks makes good TV — or fits into some other mysterious criteria.

Objectivity is such a brutal mistress.

Aside from the shows supernovas there are a host of Q&A faves who have a far better shot than most of their parliamentary colleagues of getting their faces on the box and thus their comments and mugshots in the next day’s Australian or Guardian.

There are the two undisputed Monday night mainstays: Anthony Albanese and Christopher Pyne, each with four appearances over our counting period. They clearly sit and deliver. In fact, they deliver so much that they’ve had their own special — a Q&A treat normally reserved for the PM and the leader of the opposition. (Joe Hockey also had his own night, of course, but that was a one-off in so many ways.)

There are others with a legitimate claim to the limelight. On the ALP side, matching Albo with four appearances are Joel Fitzgibbon, Catherine King and Chris Bowen. Fitzgibbon, for instance, is the default ALP balance any time the show gets a bit country. King ticks multiple boxes: regional, female and a key policy area (health).

The conservative quads — the ConQuads? — also make for an interesting bunch. Joyce and Fiona Nash, both Nationals, are Aunty favourites. That’s a big tick for the ABC charter’s regional requirements, but to be fair, they each bring solid bush cred — and in Joyce’s case, the imprimatur of deputy PM and still a slight hint of Johnny Depp.

Coming a close third is a gaggle of Liberal up ‘n’ comers, including Christian Porter, Simon Birmingham, Kelly O’Dwyer, Steve Ciobo and Greg Hunt (who is more come than up).

They have each fronted for three appearances over our survey’s time frame, presenting a relatively youthful, concerned and articulate face for the Coalition.

A Crikey prediction: Matt Canavan and James Patterson are the next ones to watch. 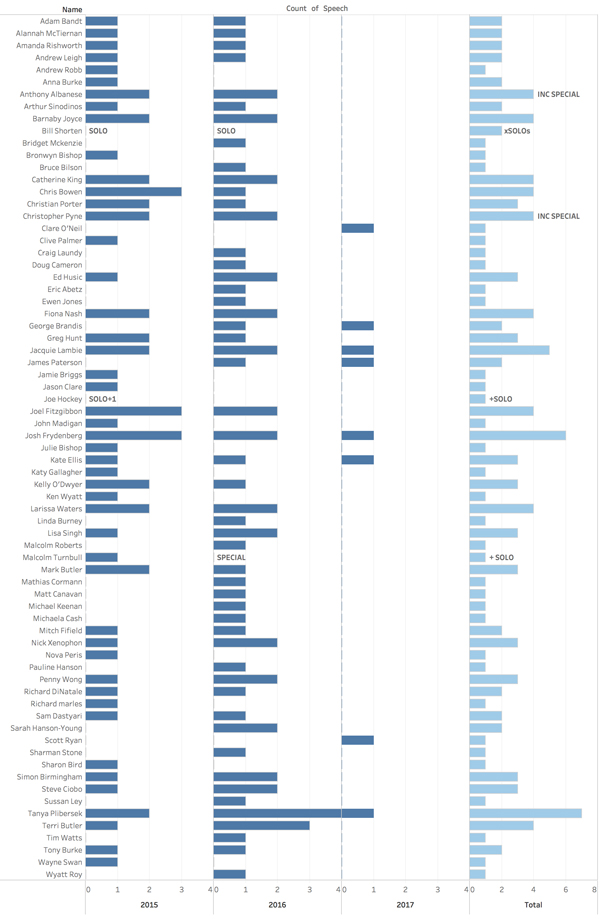 Against these “acceptable” conservatives is Kate Ellis, who will be missed by the Q&A audience when she retires at the next election, Ed Husic, Penny Wong, Lisa Singh and Mark Butler.

Much like the Coalition stars, these Laborites, each with three appearances, seem youthful and photogenic — and far less gnarly than many of their union-schooled mates in federal parliament.

We are going to draw some grand conclusions from all this in a minute but before we do, let’s not forget Q&A’s other favourite: the Greens’ Larissa Waters (four) outscores her leader, Richard Di Natale (two), and the party’s lower house MP, Adam Bandt (two). The mild-mannered senator for Queensland is right up there with King and Nash. She will probably make the Five club later this year.

And then there is South Australia. Perhaps it is just one of those things, but Q&A seems to love the Dark State. There is Pyne, Ellis, Penny Wong, Mark Butler and Nick Xenophon, who has already garnered three appearance so far in our survey and is also on track this year to make it four. (Ex-SA senator Amanda Vanstone also gets a decent run.) Does Q&A’s producer, Peter McEvoy, long for the Adelaide Hills?

Overall, more members of the House of Reps get on the show than senators; the show favours city over regional MPs — though it tries hard to address that problem — and, again, despite its best efforts, male MPs still have it. It is not as lopsided as the actual Parliament though: 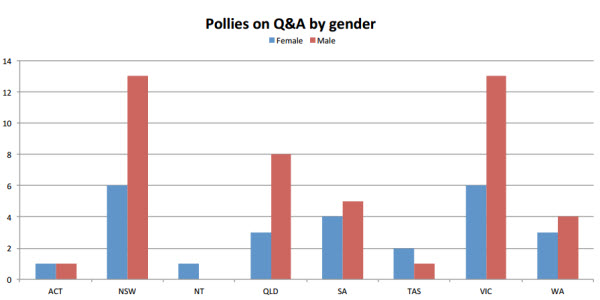 The show makes up for the dominance of male MPs with efforts elsewhere on the guest list: it has the total hots for Germaine Greer and activist Yassmin Abdel-Magied and mild affection for comic Corinne Grant and youth advocate Holly Ransom. I guess they are better for the ratings than most MPs — aside, that is, from Lambie, Frydenberg, Terri Butler, and, of course, Plibersek.

*Professor Peter Fray is a former editor and editor-in-chief of The Sydney Morning Herald, The Sun-Herald, The Canberra Times and The Sunday Age. He founded PolitiFact Australia and is Professor of Journalism at UTS.

I would like to see a similar analysis for Insiders, on both panelists and guests. For the guests I would be interested in break down by party, gender and state.

O’Dwyer has appeared only three times? Why does it seem more….

They are long hours I agree, but what about Brandis or Akerman – how much more excruciating can you get..??
Pity there is no objective measure for intelligence or charm, or honesty….the LNP would be several country miles behind the other offerings (well Lambie could be the exception, but even she is courteous and well educated compared to the LNP talking heads – and thankfully Cash does not get on very often).

I read this thinking there was going to be some analysis or insight at some point.

Agree with Sean; a load of smart-arse cobbly gook!#coulddomuchbetterbutdon’tbother

I’m sure the Q&A producers would just love to just pick whoever they want who is: articulate, interesting, relevant, able and willing. That’s a tough criteria to fill. They go back to the “old” standbys because they are a guaranteed talent whether you like them or not. When Bob Brown was active in politics people would complain that he was on radio all the time and why weren’t such & such for the Laborials given the same airtime. The fact was however that Brown was always up for an interview, & would go out of his way to oblige. Not many of the Laborials would do that.

My main growing dislike for Q & A is the mindless blood sport Tony Jones tries to make it and how he can not help himself stomping over an audience question almost to total extinction. He makes them often as meaningful as a “talk back call” to a shock jock such as Jones.

Me too, but I reckon you can see a marked drop in standards since Turnbull started whispering in Scott’s and Guthrie’s ears….I often struggle to halt my twitching Off finger.