Good morning, early birds. New polling numbers, same-sex marriage and the Racial Discrimination Act: it's another week in Canberra. It's the news you need to know, by Sally Whyte and Joseph Wilson.

The government starts the sitting week with a three-point boost in the Newspoll numbers released today, showing last week’s energy announcements were received well by voters. Another poll by ReachTEL and reported in the Fairfax papers shows there is support for marriage equality in some of the country’s most conservative electorates.

In other federal politics news, the government is trying to gain the upper hand in the debate over cuts to Sunday penalty rates, with the front page of The Daily Telegraph reporting government statistics showing that low-paid workers in some industries would get higher rates of pay even with lower penalty rates than they do under current union agreements. Also on the agenda this week are negotiations over the government’s childcare reform package (and the cuts the government wants to pass with them), a multicultural statement, and a possible end to the Medicare rebate freeze.

“Alan Joyce, the individual, is perfectly entitled to campaign for, and spend his hard-earned money on, any issue he sees fit, but don’t do it in the official capacity and with shareholders’ money. And certainly don’t use an iconic brand and the might of a multibillion-dollar business on issues best left to the judgement of individuals and elected decision-makers.” — that’s Immigration Minister Peter Dutton having another go at 20 high-profile business leaders, who wrote to the government in support of marriage equality.

“Throughout history business leaders have often stepped ahead of legislators in support of reforms to gender equity or racial equity. I see no reason why business leaders are not free to do likewise when it comes to issues like marriage equality.” — Dutton’s colleague Education Minister Simon Birmingham doesn’t share the Immigration Minister’s view that the companies should “stick to their knitting”.

“People are free to take part in public debates, and this is an issue that I’m sure will be the subject of public debate for some time.” — Foreign Minister Julie Bishop also isn’t on board with Dutton on this one.

“A monumental waste of everyone’s time.” That’s how shadow attorney-general Mark Dreyfus has described the three-year battle to release Attorney General George Brandis‘ diary for the months leading up to the 2014 budget. Brandis has finally released a heavily redacted version of his diary, after challenging Dreyfus’ freedom of information request all the way to the Federal Court, which ordered Brandis to hand over the diary in September. So what does it show? The 34-page printout of his Outlook calendar doesn’t include any meetings with community legal centres, which had their funding slashed in the 2014 budget. The Attorney-General’s office says this isn’t the whole story though, as the diary doesn’t show meetings made at short notice or by the Attorney-General himself.

Prime Minister Malcolm Turnbull has used Twitter to dispute a story claiming the government is considering cuts to the pension, in what is described by many in the media as “doing a Trump”. The PM not only denied the story, but had a go at News Corp journo Annika Smethurst and Labor leader Bill Shorten (because why not?).

Canberra: Parliament sits today, with cabinet set to discuss changes to the Racial Discrimination Act. The Australian reports not all government MPs are on board, with some in marginal electorates worried a debate would endanger their chances of retaining their seats.

Perth: The first meeting of the WA Labor cabinet is today. Meanwhile in the west, former WA Treasurer Mike Nahan has made his case for leader of the WA Liberals.

East Timor: The East Timorese people will go to the polls today to elect a new president. Reports suggest it is likely to be Francisco “Lu’Olo” Guterres.

Ranchi, India: It’s the final day of the third Test match between Australia and India, with the Aussies fighting to salvage a draw.

Only a reckless government would raid super for housing — Paul Keating (The Sydney Morning Herald): “The average superannuation balance of those aged between 25 and 40 hovers around $45,000. Were this to be taken from a saver’s account to be employed as a housing deposit, it would effectively destroy that person’s ability to compound any future sum into a meaningful retirement supplement.”

Snowy 2.0 is half-baked and damaging answer to the energy crisis — Danny Price (Australian Financial Review $): “In spite of the paucity of information about how the proposal will operate, many people, including environmental groups, reacted enthusiastically. This was surprising and premature as Snowy 2.0 will represent a massive load on the system, equivalent to a large aluminium smelter. This is because Snowy 2.0 will probably use about 30 per cent more electricity pumping water up a hill than it generates letting it flow back down a hill.”

Bush may not like it but our cities must come first — Marion Terrill (The Australian $): “Despite all the talk of supporting economic activity outside the capital cities, what is actually evident is that regional infrastructure projects are curiously over-represented in marginal seats.”

Why are we cold on the idea of nuclear fission? — Adam Creighton (The Australian $): “To the extent Australia’s nuclear ban is moralising, it’s hypocritical. Australia’s uranium exports to India, which hasn’t signed the comprehensive test ban treaty, are ramping up to 1500 tonnes over the next five years.”

Frenchpolice are questioning the father and brother of Ziyed Ben Belgacem, who was shot at Orly Airport after entering with a gun and trying to use a French soldier as a human shield. The gunman shouted “I’m here to die in the name of Allah” before he was shot by two soldiers, according to Paris Prosecutor Francois Molins. — CNN

Syrian military airstrikes rocked parts of Damascus following a surprise rebel attack in the Jobar district of the city. Rebel forces had used artillery shells, rockets and suicide car bombs in the fight for control of the area, which lies close to the city centre. — BBC

Residents of Mosul’s Old City are fleeing the city as Iraqi forces move to recapture the symbolically important al-Nusri Mosque. The mosque was where Islamic State leader Abu Bakr al-Baghdadi declared a caliphate in 2014, and it still flies the Islamic State flag. Refugees leaving on Sunday joined more than 255,000 people already displaced from the area by fighting. — Reuters

“Was there a physical wiretap of Trump Tower? No, there never was.” — Chairman of the House Intelligence Committee Devin Nunes put Trump’s unsubstantiated claims to rest on Fox News Sunday. Trump’s administration continues to defend the claims that the Obama administration wiretapped his campaign.

‘London Bridge is down’: the secret plan for the days after the Queen’s death (The Guardian): “When people think of a contemporary royal death in Britain, they think, inescapably, of Diana. The passing of the Queen will be monumental by comparison. It may not be as nakedly emotional, but its reach will be wider, and its implications more dramatic.”

Trump 101: how to deal with Donald (Axios): “With President Trump taking a hands-on approach to negotiations, here are five tips for surviving and thriving — based on conversations with executives, aides and friends who have battled Trump in private and found some success.”

Why do people swear? (BBC News): “By definition, swear words are offensive. If a word, over time, ceases to be offensive, then it falls out of use as a swear word. Offence alone is not enough, though, for we can offend with language without swearing.”

Le Canard unchained (Politico Europe): “For decades reporters from other newspapers have known the moment on Wednesday when they succumb to Canard envy, reading the scoops that have escaped them. Corrupt officials. Real-estate shenanigans and insider trading. Bizarre money schemes, ethical lapses, and conflicts of interest. Who said what during cabinet meetings, what politicians said in private when no microphone was around. Feuding ministers, backroom deals, and stories of vanity or ridicule.” 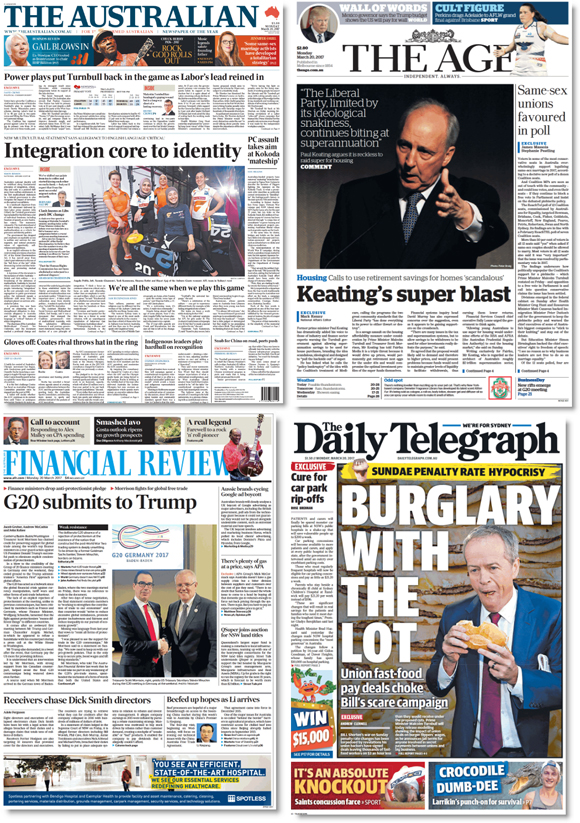