George Osborne does not seem to have enough to do between being an MP and working part time for an asset management company, and has decided to become a journalist.

In a surprising announcement over the weekend, a London daily newspaper has announced a sitting MP as its new editor.

Conservative MP George Osborne was the Chancellor of the Exchequer in David Cameron’s conservative government from 2010 to 2016, and will add editing the free Evening Standard to his daily duties from May.

Osborne has never worked as a journalist, and as well as continuing as an MP, he works four days a month at asset manager BlackRock.

According to Rajan’s report for the BBC, Osborne was one of 30 applicants for the position.

The move has been met with shock by politicians and media commentators in the UK.

According to Business Insider reporter Adam Bienkov, the newsroom was not overjoyed by the announcement, tweeting that one staffer had, for the first time, considered pretending they worked for the Daily Mail, which operates from the same building. 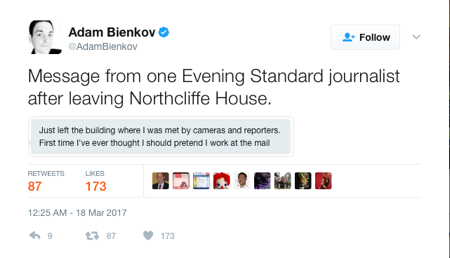 This is not the first time a politician has taken the helm of a publication. Current UK Foreign Secretary and former London mayor Boris Johnson worked as the part-time editor of The Spectator while still representing his electorate as an MP. He quit when he was promoted to the frontbench.