A number of fake Facebook profiles allegedly associated with Victoria Police social media monitoring have been deleted after questions from Crikey.

A number of suspected fake Facebook profiles alleged to have been associated with Victoria Police that were used to target activists planning protests have been mysteriously deleted with no explanation from the agency.

Activist Kieran Bennett this week revealed that after one homelessness activist group posted on Facebook about plans to hold a forum on Melbourne’s rough sleeping ban, the group received a message from a profile alleging to be associated with the Victoria Police stating:

“This is Victoria Police. We’ve been informed of your protest action and want to let you know we’ll be monitoring this event with interest.”

After investigating the account, Bennett discovered that more than 80 accounts had been set up, connected to each other with few friends and little content, and often no picture. Many of them have police-sounding names like SenCon Henderson, or Insp Simpson, but looking at the profiles reveals that there is little to them other than the name, and sometimes a police-themed profile picture. 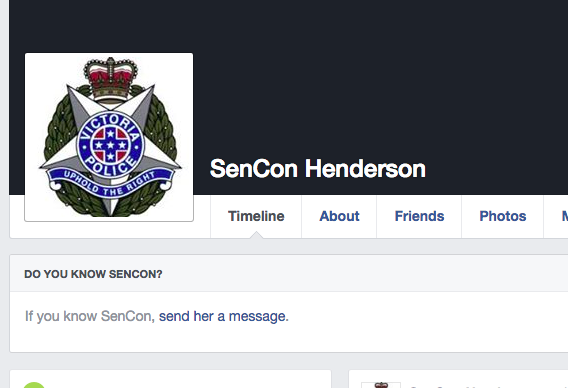 Bennett found one actual real account connected to all the fakes, that of Mark Bayly, the communications manager with Victoria Police. Crikey has also seen a profile for “Victoria Bayly” who is also friends with some of the fake accounts. Bennett says many of the accounts have similar or almost identical names to serving officers, and through these fake accounts it would be quite easy to track down the social media presence for many current serving officers in Victoria Police.

Crikey put questions to Victoria Police on these fake profiles, and why Victoria Police had opted for this approach for social media surveillance. In response, Victoria Police issued a short statement saying it was reviewing its current practices and would not comment on the specific questions.

“Victoria Police is currently reviewing its processes and governance arrangements relating to use of social media for investigative and operational reasons. Part of this will focus on ensuring that all communications are both appropriate and secure.

“Victoria Police uses a wide range of means for collecting intelligence to assist with investigations. Intelligence is a critical component in our ability to keep Victorians safe. As is common practice for law enforcement agencies, we do not believe it to be in the public interest to discuss those methodologies publicly.
“We would like to conclude the review before commenting further.”

Several of the profiles initially found by Bennett have since been deleted. Some of this has happened via activists reporting, but it appears that Mark Bayly’s personal Facebook page was also deleted after Crikey raised questions with Victoria Police.

Lest anyone forget – BigBruder doesn’t – that, in the mass surveillance, data retained future, that the alleged Labor party was just keeno on being complicit in passing the legislation.
Kafka didn’t write about a malevolent State but something worse, an utterly value free one in which the inmates were tolerated only so long as they shut up, consumed and died.
It didn’t even matter if not necessarily in that order

I am only surprised that this was done naively. It is quite reasonable to monitor open source social media. Hence the popularity of Neighbours, Home & Away etc.