When news started to spread out of Senate estimates that public servants were being forced to work out of the local McDonald’s in Armidale as part of Deputy Prime Minister Barnaby Joyce’s grand decentralisation plan, Joyce’s office would have been alerted to the tweets, online news articles and radio grabs within a minute of their publication or broadcast.

Joyce’s office is one of a few government agencies, corporations and other organisations to take the leap from the incumbent Isentia over to new start-up media monitoring company Streem.

As Crikey has reported in the past, government departments spend millions on contracts with Isentia and a few other smaller players to provide media monitoring and analysis services so departments and politicians can stay on top of what is being said about them. Government clients are just a small part of the lucrative business, which has had a near monopoly in the market — and its attendant problems — for years.

Isentia, which has been in the market for more than 30 years and employs more than 300 people in Australia, has operated by providing summaries of news segments on TV and radio to customers. Human monitors based around the country used to write up summaries of their local radio and TV stations. Eventually this was centralised, and now monitoring is done offshore, where labour is cheaper.

In his time in working as an adviser to former prime minister Julia Gillard’s office, Elgar Welch decided that the way Isentia (and competitor Meltwater) worked was all wrong. He set about with software engineer Antoine Sabourin to redesign the whole media monitoring model from the ground up, and the result, Streem, picked up former ACCC chair Graeme Samuel and the chair of Woolworths’ analytics firm Quantium, Tony Davis, for the board.

Streem is now offering monitoring and analysis services across TV, radio, newspapers, online news, social media up to the minute on its platform, meaning as soon as Peta Credlin has said something about Barnaby Joyce on Sky News, his office will know within about a minute whether a journalist has tweeted about it, and whether the grab has been picked up by radio news.

Welch told Crikey the company spent three years in research and development. Now after 18 months of customer commercialisation, Streem has officially launched to the public, with 50 customers in tow, with clients like Joyce’s office, corporates like Samsung and the AFL. 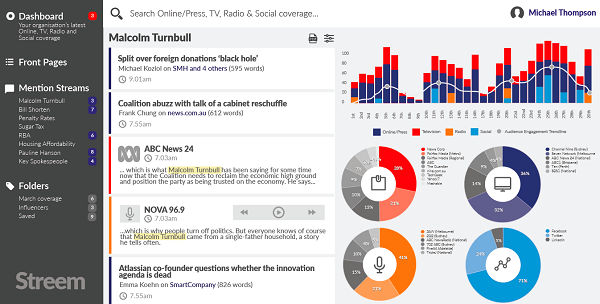 “We did not launch this three years ago when we started. We built this product out, and made it full service, reliable and validated it. This is a full service, ready to go media intelligence platform … It did not appear from nowhere,” Welch said. “It has been built from that time developing and running with customers to make sure it solved their problems.”

The company has also teamed up with the largest media companies in Australia to provide much more accurate and real-time audience measurement, which Welch says will provide much more context for what type of person is reading an article at a particular point in time.

Isentia was approached for comment but did not respond by deadline. The company has thousands of clients and reported revenues in the first half of 2017 of $79 million. Isentia now operates in markets outside of Australia, although Australia still makes up the vast majority of its revenue.

Crikey’s travel costs to the launch were covered by Streem. Josh Taylor worked at Isentia before becoming a journalist, and Crikey has a media monitoring agreement with Isentia.

The robot revolution might not be as close as you think

Stop worrying about automation: the real problem might be too few workers