Liberals in crisis: beware the fate of Jeremy Corbyn

A radical party membership, in the absence of an electorally appealing leader, may inflict serious damage on the Liberal Party, Bernard Keane and Josh Taylor write.

It’s called “The Law of Curvilinear Disparity”, and you’re unlikely to have heard of it unless you’re a psephologist. It’s a theory, from political scientist John May, that both the elites of political parties and the voters who support it are more centrist than the party membership, which skews significantly more radical. 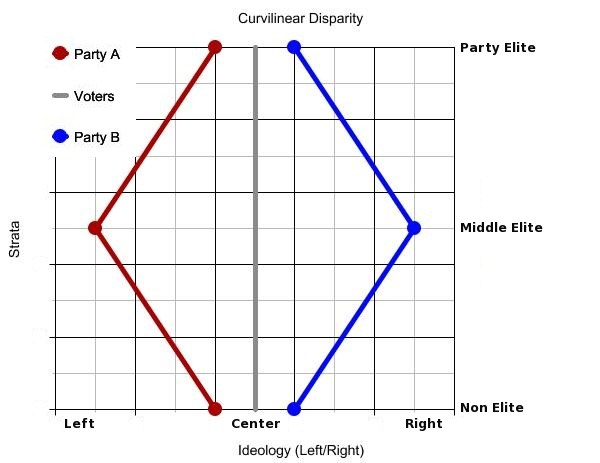 The experience of the Liberal Party in recent years suggests the party’s base — elderly, and middle and high-income — indeed skews dramatically more conservative than the electorate as a whole on issues like climate change and 18C and support for Tony Abbott. There are, however, other areas such as same-sex marriage, and the differences have diminished over time; on some issues like support for renewable energy, euthanasia or distaste for privatisation, there appears to be little evidence of noticeable differences between any voters.

If there’s a curve between voters, members and MPs, the more gradual the gradient. As the Liberal Party under Tony Abbott demonstrated, a parliamentary leader who represents the party’s base is likely to lose touch with voters; as the experience of Malcolm Turnbull has demonstrated, a leader popular with voters is likely to alienate the most radical of the party’s base.

The most dangerous curve is an extreme one like that afflicting the UK Labour Party. That party membership, and its union base, has often been far more radical than the parliamentary party, but the far left, entryists and Trotskyites have infiltrated the party to give an unelectable extremist, Jeremy Corbyn, an unassailable grip on the leadership despite many of his colleagues refusing to work with him. The result is a Tory government unopposed by any effective opposition.

The traditional solution to the challenge of the curve is a strong leader who unifies the party and succeeds electorally — even radical party members are prepared to forgive much if the party is winning elections. John Howard consciously reached out to party moderates in his second, hugely successful stint as leader. Tony Blair and “New Labour” delivered three terms in power for UK Labour despite the misgivings of the left. For a time, Tony Abbott offered the same — conscious of his narrow victory over Malcolm Turnbull, he included senior moderates on his frontbench, restored the defeated Malcolm Turnbull to shadow cabinet and proved electorally successful, but he couldn’t handle the demands of national leadership.

Ironically, Labor, once the most ideologically riven and formally factionalised of parties, has fewer problems on this than the Liberals. The party’s base (ageing, like the Liberals’) skews more left-wing than caucus — Anthony Albanese won the membership ballot component of Labor’s leadership election in 2013 but lost out in caucus, and the membership is consistently to the left of the parliamentary party on issues like asylum seekers. However, there is otherwise little significant ideological division with Labor; recent divisions have been personality-based, rather than over significant policy issues.

The other solution is to in effect override the wishes of the party membership through factional control — something NSW Liberal moderates have been highly successful at doing, and they’ve been rewarded with success at the state level, while right wingers have sought to undermine that by giving more power to members on preselection.

In the absence of a strong, popular leader, however, the federal party faces the potential for Corbynisation, as it waits for its hardline conservative membership to die off.

Corbyn’s problem isn’t his ideology, it’s his apparent inability to communicate its wisdom and benefits.

If Corbyn were able to work with the bLIARites of the PLP he wouldn’t be worth pissing on.
When asked her greatest achievement Mrs T replied like a shot, “Tony Blair!”
It’s just one of those little serendipities that ‘Tony Blair MP’ is an anagram of “I’m Tory Plan B”.
Pity that gumBoil Shlernt is just another euphemism for gutless, ethics & ideas free waste of space, currently piling up those super Super entitlements whilst he shills for the Alternative Liberal Party.

Anyone who labels Jeremy Corbyn’s policy agenda “extremist” is woefully uninformed about the history of economic policy. If you are that deeply immersed in the soup of neoliberal dogma, you can’t be a perceptive analyst of public policy.

Oh, Bernard, you did so wonderfully with the article about McManus and now this drivel about Corbyn? He’s been consistently – and undemocratically – whiteanted and attacked from within by the party elite and from without by woolly-headed Guardianistas who always fear the actuality of real change despite spending their lifetimes wringing their hands about the need for change. He has consistently polled well and energised a huge amount of previously apathetic people. It’s just rubbish to say he’s some sort of unpopular radical foisted on party and public alike by some conspiracy of Marxists and anarchists.

Corbyn is an electoral disaster. His polling is the worst in decades despite blunders of conservatives.

Actually, you’re wrong. Corbyn’s Labour is polling almost exactly what Labour got in the last general election. And it’s the best poll results of any social democratic party in Europe. Yes the polls mean Labour would get soundly beaten if an election were held now, but the numbers suggest they’re doing about as the electorate last rated them. One other thing, the Labour vote has declined AT EVERY ELECTION SINCE Blair was first elected. They have a deep systemic problem, and more of the same isn’t going to solve it.

I like Corbyn dragging Labour to the left but the man does not inspire others well. He does not aggressively attack the Tories. Inspiration and leadership are needed to wake the electorate and convince them of your ideas. Jeremy seems too nice, too inoffensive.