The Australian newspaper has written more than 33,000 words of tribute to cartoonist Bill Leak, which is far more words than were written about the 22nd prime minister of Australia when he died two years ago. Crikey media reporter Emily Watkins and intern Isabelle Amy report.

In mourning its editorial cartoonist, you might think The Australian has gone a bit overboard with its coverage.

Following Leak’s death on Friday, the paper published a front-page tribute to him: 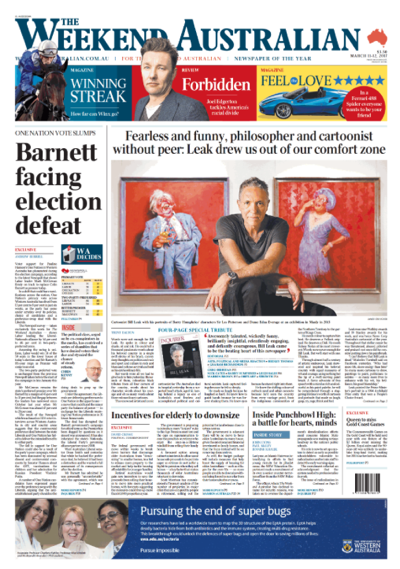 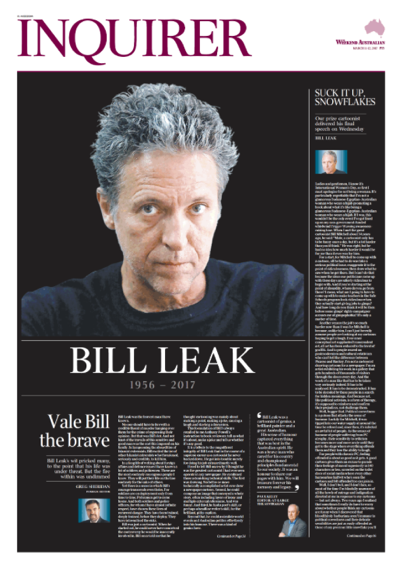 The glowing obituaries, many of which also pushed the Oz’s well-worn campaign for changes to the Racial Discrimination Act, did not slow down as the week wore on. Stories about Leak and the case against him in the Australian Human Rights Commission under section 18C of the Racial Discrimination Act were published on the front page for three of the six editions after his death.

Crikey has analysed news and opinion articles and editorials published by The Australian between March 10, 2017, when Leak’s death was announced, and a week later, March 17, 2017.

In total, the Oz published 43 stories about Bill Leak in the eight days after his death. There were a total of 33,388 words to eulogise their beloved cartoonist.

That’s enough to fill a novella on the subject, or roughly double most honours thesis requirements.

And it’s substantially more than than the national broadsheet dedicated to Liberal former PM Malcolm Fraser when he died last year.

In the eight days after Fraser’s death in March 2015, The Australian gave him 27,000 words in 37 obituaries and tributes, which would still fill a substantial tome in tribute to the 22nd prime minister of Australia. But as far as The Australian is concerned, it seems Fraser, who became PM after Gough Whitlam’s dismissal in 1975 and remained in office until 1983, was no Bill Leak.

It’s not the first time The Australian has gone all out on Bill Leak coverage. As Crikey reported in November, in the three months after the Leak cartoon subject to the Human Rights Commission hearing was published, The Australian published more than 134,000 words on section 18C of the Racial Discrimination Act — more words than are in George Orwell’s 1984.

This latest campaign does not rival the classic Orwell novel on the thought police, but it is more than the same author’s allegorical Animal Farm, which has 29,000 words.

And your point is?

Pretty fair point raised I think. All I saw was a racist cartoon on a level with public bar ranting through the long years. And not funny, and neither were his Gillian Triggs or homophobic ones either. They were just sick that’s all.

And to think the PM said his earlier cartoon “united the nation”. This is disgusting.

It keeps the other attack poodles loyal and keen. Now Janet knows what to expect when she heads down the long slide.