Coopers didn’t see backlash coming. A video has emerged showing the owners of Coopers Brewery didn’t expect the backlash against its partnership with the Bible Society. An interview with the Bible Society’s CEO Greg Clarke and Coopers managing director Tim Cooper posted by religious news outlet Eternity News on March 9 shows a journalist asking Cooper if he expects any negative response to the partnership, and he says no.

“I think people know that we support a number of different causes, and they might be surprised to know that we’re happy to support the Bible Society,” Cooper said.

“All of us face choices in life and at some point in time we need to make a very important choice as to whether we believe in Jesus Christ and we have to make a decision on whether we are going to follow his ways or not. The opportunity that this provides — for maybe just a handful of people — is always a meaningful thing in terms of support not only for the Bible Society, but in terms of getting the message out there.”

Later in the video, Clarke was asked if it was a “risky” partnership — a suggestion that he played down.

The statement by Cooper toes a different line to the first statement released by the company after the controversial “Keeping It Light” video, which said the company wasn’t trying to change people’s views with the partnership: “Coopers isn’t trying to push religious messages or change your beliefs by celebrating 200 years of charitable work undertaken by the Bible Society,” the statement read. The new video doesn’t mention the Keeping It Light video, which featured MPs Tim Wilson and Andrew Hastie debating marriage equality. 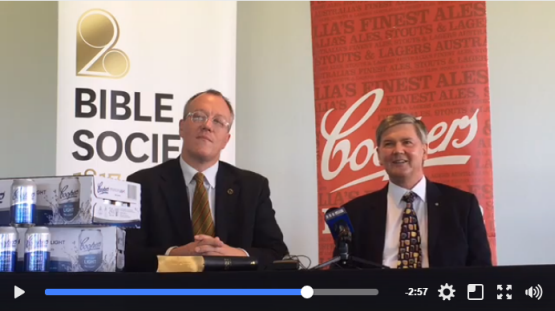 The video also reveals Coopers has donated to the Bible Society through the Coopers Foundation over the years, and the funds were used to distribute Bibles to the Defence Force. In the Eternity News video, Cooper also references the Methodist faith of the founder of the company as the reason the company’s philanthropy efforts are focused on Christian organisations. Cooper said that 10,000 cartons of the Bible Society beer had been produced, and he joked that they could become a collector’s item. Now that Coopers has cancelled the distribution of the cans, that statement has become quite prophetic.

Fair Weatherill friends. Politicians are often criticised for not having a go at their opponents to their faces (apart from in question time); usually the insults are lobbed from a safe distance at separate press conferences. This morning, South Australian Premier Jay Weatherill crashed a press conference called by federal Environment and Energy Minister Josh Frydenberg and proceeded to have a go at the Prime Minister, the federal government, and Frydenberg himself. Both men faced the cameras and not each other, while trading insults over energy policy. At the start, Frydenberg was asked if it was awkward that Weatherill had turned up. He said no, but the Premier chimed in “it’s about to be”. It needs to be seen to be believed: 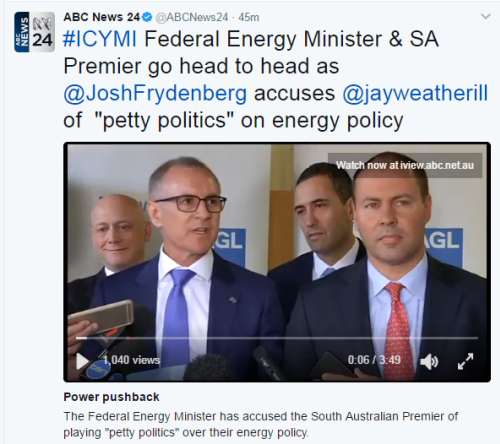 If only we could channel political insults into power, we’d have a renewable energy source we could all get behind.

DTA’s own transformation continues. Crikey has learned that Department of Finance employees in the ICT Procurement and Strategic Sourcing branch were informed yesterday that they would be moved into the Digital Transformation Agency from May 1. Finance tells Crikey this is phase 2 of the Administrative Arrangements Order from October last year, which will result in DTA taking over responsibility for procurement from Finance.

DTA’s acting CEO Nerida O’Loughlin told a Senate committee this week that 34 staff had moved from Finance to DTA in phase 1, and up to another 14 may be moved as part of phase 2. Part of the reason for the delay in the transition was to ensure that negotiations over IT contracts weren’t interrupted. This change means that Prime Minister Malcolm Turnbull’s pet project will eventually be almost indistinguishable from its predecessor, the Australian Government Information Management Office (AGIMO), apart from sitting in Prime Minister and Cabinet. It raises questions as to what the point of it all was in the first place. O’Loughlin told the committee that one of the agency’s biggest initial projects lauded by Turnbull — a single government website — was dropped because other departments weren’t keen on it:

“We found that that there was not a strong enthusiasm from departments for a single website which did not cover transactions — it covered information but not necessarily transactions — and agencies were very keen to focus their investments in time and energy in improving transactional websites rather than information websites.”

Re Weatherill/Frydenberg: my opinion of Weatherill has soared. At long last, a politician speaking plainly & frankly, clearly determined to find a solution for the state while being sold snake-oil by the federal government.

Of course Weatherill has the 2018 election in mind but, despite the self-preservation motive, it’s refreshing to see him take on the federal incompetents.

Did I hear that correctly? Did Josh Frydenberg actually criticise Jay Weatherill for engaging in “petty politics” over energy policy?!?!?!?!?!?!?!?!

Frydenberg is a gold-medal white-is-black bull-shit artist – with the Commonwealth Games due next year he should be there “slinging it for Oz”.

Fantastic! I’m so fed up with the Feds’ misleading arguments about SA’s energy problems and their constant criticism of SA. You go Jay!!

Well no one can accuse Frydenberg of having a poker face. Priceless attack by Weatherill. But who was the bald man standing in the back? Fascinating expressions all the way – as though he couldn’t believe what he was hearing, but enjoying it anyway.

Why would Coopers pick two members of the party/government – bogged in ideological inertia – that has acted as a giant wash-out on the road to SSM, to “promote” their product through some staged glib gab-fest over something as important to so many of the LGBTI community wanting action – which the majority of Australians think should have been done last year, and could have been done through a vote in parliament, but wasn’t, because the party of these two “stars” was ideologically conflicted.
Members of a party depriving that section of society of the chance to be treated equally?