Safe Schools ignored in WA? One of the interesting historical revisions from the Western Australian elections is the Australian Christian Lobby claiming that there wasn’t a debate about Labor’s proposal to put $1.4 million in to fund the Safe Schools program when the federal government’s cash runs out later this year. Managing director Lyle Shelton tweeted it was the “untold story” of the WA election.

This has left some in WA scratching their heads. As Ms Tips previously reported, there were flyers distributed about it, the ACL held a forum with Labor leader Mark McGowan and former premier Colin Barnett where both men pushed their positions (with one audience member remarking that Barnett had “just won” the election by announcing his opposition to Safe Schools). The ACL subsequently put out multiple releases on it. Peter Abetz, the older brother of he-who-hates rainbow flags, Senator Eric Abetz, campaigned strongly not only in his seat but other seats on the issue. His local paper also had a front-page wrap “warning” parents about the program. Untold story? Incidentally, Abetz the elder had his butt kicked in his seat by Labor’s Terry Healy, who was the first celebrant to legally marry a gay couple in Australia when it was briefly legal in the ACT.

Paleo pear Claire vindicated. It was only a few weeks ago that Ms Tips learnt that Paleo pear-and-banana bread existed, thanks to the Department of Finance’s “gamechangers” graduate recruitment video. In the opening scene, a graduate called “Claire” asks her colleagues if they want to join her for a Paleo pear-and-banana bread, although they decline with the polite excuse that “it’s too fancy for me” (when really it is probably because there was no cow’s milk butter in Paleolithic times). In questioning over the video at Senate estimates, Finance deputy secretary David Fredericks said the line about the Paleo pear-and-banana bread had been added by the graduate in the video, and that senior people in the department thought they were best to defer to the young people involved. Since then, Fredericks has written to the committee to correct the record:

“In my testimony I stated that that line was the result of a change in the script made at the request of the graduate. I have since been advised that a member of the production crew suggested this change to the script.”

Glad her reputation is no longer besmirched.

The joys of working from home. And lastly, to the moment that has made us smile more than anything this week, the video of Robert Kelly giving an interview to the BBC while his children ran in with the best dance moves on the BBC since the last season of Strictly Come Dancing. Kelly, his wife Jung-a Kim and children Marion and James have explained just what they thought of the worldwide fuss made by a few moments in their day. 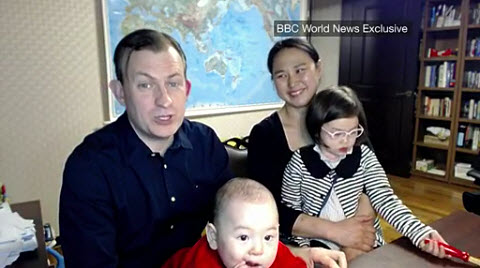 Think Safe Schools was only an “untold story” as, despite the best efforts of the ACL and the Oz, this isn’t a first order issue for many voters.