Good morning, early birds, and beware the Ides of March. The news is once again all about gas, and there's more cautious words on apartments in our capital cities. It's the news you need to know, by Sally Whyte and Cassidy Knowlton.

Meanwhile, the South Australian government announced yesterday it would spend $550 million on a new energy plan, including a 250 megawatt gas-fired power plant, along with Australia’s largest battery, to protect the state against the blackouts and load shedding it experienced this summer. The plan also means the South Australian energy minister would have the power to direct a generator to be turned on when more supply is needed — currently that power resides with the Australian Energy Market Operator (AEMO). Will this mean power prices go up or down? Frydenberg has blasted the plan, saying prices will go up, even though SA Premier Jay Weatherill says prices will go down.

“What we saw from the global financial crisis has made us more focused on the fact that just because one institution doesn’t look to be doing anything particularly risky, it doesn’t mean that if you aggregate it with the others the end result won’t look quite risky.”

That’s the Reserve Bank of Australia assistant governor Michele Bullock speaking at an event yesterday, explaining the RBA’s concern about a possible glut of apartments in Brisbane and Melbourne.

Coopers Brewery has cancelled the release of a beer made in partnership with the Bible Society after controversy over the society’s “Keeping It Light” video, in which Liberal MPs Andrew Hastie and Tim Wilson debate marriage equality. In a bizarre video, the company’s managing director Dr Tim Cooper and director of finance and corporate affairs Melanie Cooper said the company did support marriage equality. The video was released after bars across the country said they would be boycotting the beer.

Canberra: Greens leader Richard Di Natale will address the National Press Club, and previews of his speech show he will call for Australians to move to a four-day working week of six-hour shifts.

Perth: The new Labor caucus will meet after the party’s resounding win in Saturday’s election. An announcement of the new ministry is expected tomorrow.

Netherlands: The Dutch people go to the polls today; more detail in the World section.

Penalty rates a big deal for small business, as two-faced Shorten knows — Michaelia Cash (The Australian, $): “For example, Mr Gough owns a specialty deli in Ballina that employs 20 people. Due to high Sunday penalty rates, he works on Sundays for free. He told the commission that with moderate changes, he could open the store’s bakery on Sunday, work fewer unpaid hours and pay for more staff. Mr Da Rui knows his pharmacy in Bayswater, Western Australia, provides an important service to his local community. With moderate changes in penalty rates, he could roster on additional pharmacists to spend valuable one-on-one time with patients.”

Drinking Coopers = Supporting hate? Oh, come on — Miranda Devine (The Daily Telegraph, $): “If you ever wondered what it means to live in an era of identity fascism, when any attempt at debating important cultural issues is verboten, there is no more perfect example than the case of Coopers Brewery V the Rainbow Gestapo.”

Fixing power needs more than Elon Musk’s magic wand — Bruce Mountain (Australian Financial Review, $): “This is really the key issue. Australia’s electricity sector has been quick to spend its customers’ money, with electricity prices now among the highest in the world. This must change. Much tougher oversight of wholesale and retail markets and ensuring that existing gas generation is made available to the electricity market at a reasonable price is the place to start. Part of the South Australian government’s recent proposals go to this.”

The Congressional Budget Office estimates Republicans’ proposed healthcare bill, which is estimated to save US$337 billion over 10 years, would leave 24 million more Americans uninsured over the next decade as compared to Obamacare. The report also said older Americans would pay “substantially” more for their health insurance. The White House immediately declared the CBO’s figures were malarkey: “We disagree strenuously with the report that was put out,” said a White House spokesman.

White House officials are also trying to walk back Donald Trump‘s claim that his predecessor, Barack Obama, had put a wiretap in place in Trump Tower during the campaign. The implication of a wiretap, if it existed, would indicate Trump was the subject of a law enforcement investigation, probably related to his ties to Russia. Last week Trump tweeted: “How low has President Obama gone to tapp my phones during the very sacred election process. This is Nixon/Watergate. Bad (or sick) guy!” But White House Press Secretary Sean Spicer says Trump didn’t mean Obama was actually wiretapping: “He doesn’t really think that President Obama went up and tapped his phone personally … The president was very clear in his tweet that it was, you know, ‘wiretapping,’” with air quotes. Thank goodness we cleared that up.

The way has been paved for Brexit, with British Parliament passing a bill to trigger Article 50 and start the process of leaving the European Union. British Prime Minister Theresa May is expected to announce the Article 50 trigger at the end of the month. She had been expected to announce it immediately after the vote but was caught on the hop after Scottish First Minister Nicola Sturgeon announced Scotland would demand a fresh referendum to leave the United Kingdom. Sturgeon initially said the referendum must be held before the UK and EU called it quits, but she later softened on that, indicating Scotland might be willing to wait for a referendum until after Brexit. — The Guardian

French presidential hopeful Francois Fillon is facing formal preliminary charges over claims he arranged “fake jobs” for his wife. Fillon insists his wife was employed as his parliamentary assistant and earned the hundreds of thousands of euros in public money she received, but he is being officially investigated for embezzling public funds, complicity in misappropriating funds, receiving the funds and not declaring assets fully. Fillon had been seen as the candidate most likely to stop far-right candidate Marine Le Pen at this year’s election, which starts April 23 and will conclude May 7. — The Independent

A mass grave containing 250 skulls has been found in Veracruz, Mexico. Authorities suspect the mass grave was a dumping ground for drug traffickers to dispose of the bodies of people they murdered. — BBC

The Netherlands goes to the polls today, and all eyes will be on whether the party of Islamophobic far-right nationalist Geert Wilders will get a look in, possibly in coalition. Days before the election, polls found less than half of Dutch voters had decisively settled on a party for which to vote. — Sky News

How George W Bush went from “war criminal” to the internet’s favourite grandpa (New Statesman): “It sounds flippant to say that compared to Trump, Bush is starting to look good, and this sentiment has become a popular online joke within itself … it seems there’s nothing better for a catastrophic leader than being followed by an even more catastrophic one.”

Assad’s Control Erodes as Warlords Gain Upper Hand (Der Spiegel) : “Bashar Assad’s power over the areas of Syria under government control is slipping. Armed militias are growing stronger and the country’s president can do nothing to stop them.”

Australia was colonized by a single group 50,000 years ago (Arts Technica): “A new picture has emerged of how Australia was colonized. Aboriginal Australians shaped the land, settling it rapidly, but their communities were also shaped by the continent’s unique and changing environment. Many distinct societies grew out of a single origin, but they retained a belief that they have been on the land for a profoundly long time. Now it appears that scientific evidence backs up their claims.” 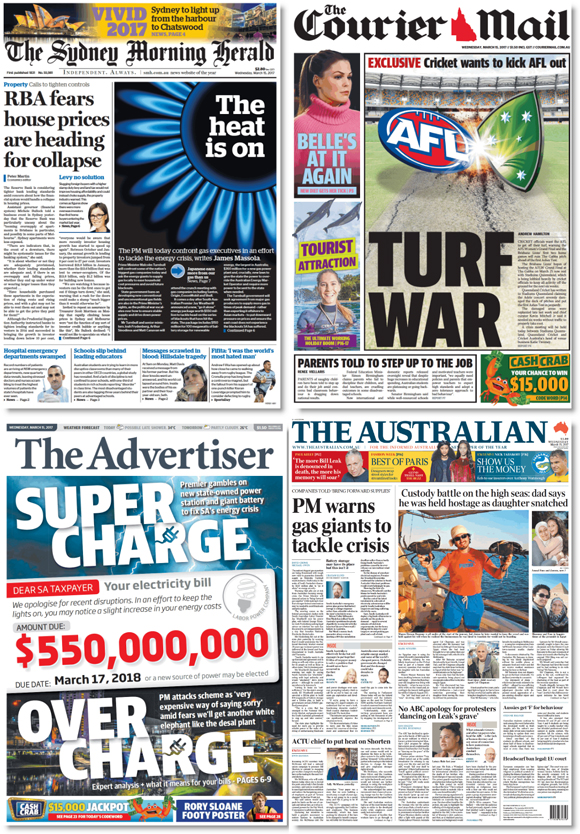