They’re at it again: stats collectors come back for another assault on privacy

Unbowed by the census debacle, the Australian Bureau of Statistics is still threatening to prosecute people who don't hand over private information.

Unchastened by the census debacle and unbowed by the government’s use of personal information to pursue its critics, the Australian Bureau of Statistics is again demanding Australians hand over their most private information under the threat of prosecution.

Earlier this month, Andrew Henderson of the ABS wrote to 35,000 households demanding that they participate in “an Important Household Survey” (yes, with the capitalisation) and register online for the process. “You are obliged to provide the information being requested,” the chosen recipients were told. Anyone who refused to be registered would be visited by the ABS and required to comply under the Census and Statistics Act 1905. Currently, anyone refusing to co-operate with the ABS can be fined $180 (plus court costs). 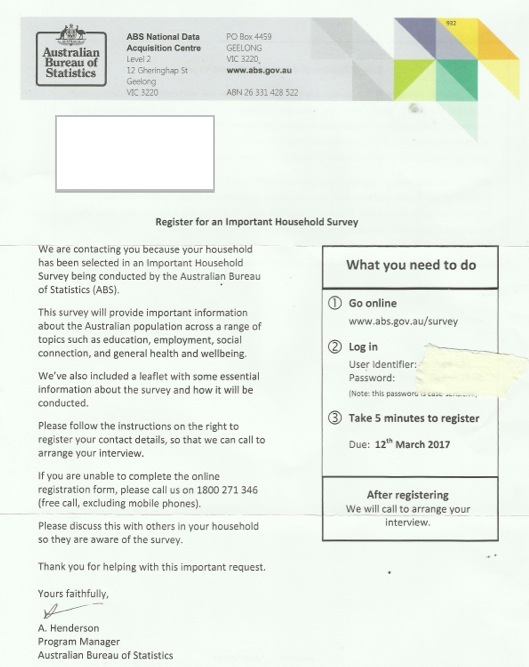 How the ABS chooses its targets isn’t clear: in the 1980s it infamously targeted journalist Shirley Stott-Despoja and lost the subsequent court case — and then had Parliament change the law to remove the possibility of losing again.

[Why you should boycott the census]

The survey comes in the wake of both the 2016 census debacle and the subsequent inquiry, which revealed that the ABS had a poor understanding of and lacked capacity to manage its IT contracts. It also comes after revelations the Department of Human Services, which promises “we are bound by strict confidentiality and secrecy provisions in social security, families, health, child support and disability services law” and that it will not use personal information “for any purpose other than why it was collected”, handed private information to journalists in order to smear Centrelink clients for publicly criticising it. The government also plans similar laws to enable the Department of Veterans’ Affairs to do the same.

Information obtained from the survey will be added to census data, other survey data and other information on individuals and addresses held by other government agencies to create a joined-up, lifelong file of personal information on every citizen — protected, the ABS says, by an encrypted identity key.

The Centrelink attacks on its critics demonstrate how government will always find ways to justify exploiting personal information despite assurances it will be kept confidential — the Department of Human Services insisted its was right to release private details about writer Andie Fox to journalist Paul Malone, in order to address the “concerns” of “other individuals … so that people knew it was important to file their tax returns and tell us about changes in their circumstances”.

Citizens concerned to protect their privacy and prevent future abuse of their information by the government are best advised to take whatever steps they can to avoid ABS surveys, since the ABS can offer no guarantees that the information will not be stolen or misused by the government. If they must co-operate, victims are advised to film the entire interview with the ABS representative to create their own record of what information has been provided — you are perfectly entitled to film in your own home, and ABS employees have no basis for refusing to be filmed.

And exactly where does the government say our data is being stored….?

If the 35,000 Households chosen for the Important Household Survey promptly placed the ABS letters In The Compost then it would be a Fascinating Outcome if they Were All Prosecuted. Gaoled, even. At the very least Tarred & Feathered.

We’ve received one of these letters.

Given we chose to leave a few parts of the Census blank, or filled in generic information, I must admit I’m wondering just how “random” it really is.

It’s my understanding that at least with these household surveys, you are not required to provide your name, so some privacy is still left in the system. I have not registered online and I intend to tell the interviewer, should they proceed, that I will not be answering questions I consider to be too personally identifying.

As someone who believes the information collected by both the Census and these additional surveys, can and should be instrumental in crafting good Government policy, it leaves me shaking with anger that institutional trust has been so comprehensively destroyed that even I am tempted to provide false data to protect myself.

You are not alone in that temptation. Several people of my acquaintance, ever law-abiding, expressed the same dilemma regarding the Census. I don’t know how many succumbed to telling porkies… but the ones who didn’t file a return didn’t need to.

Incidentally, I’d be interested in any examples of good government policy being crafted as a result of Census data. Energy security perhaps….?

Pretty much all provision of Government services depends on data from the Census and ABS surveys. Individually we might not agree with particular decisions or policies but overall policy making would be nearly impossible without these data. You’d get schools being built in areas where there were few children and no facilities for the elderly in an area with retirement villages. The Census itself is imperfect, especially the 2016 one, but overall ABS statistics are relatively good by comparison with those of other countries. The ABS is still guaranteeing that our individual data will not be revealed to anyone although they harmed their reputation for confidentiality by deciding to keep a lot more individual Census information. As a former ABS employee I answered the 2016 Census accurately but declined to give my name and those of my family members.

If you did the census online, or posted in a form using the user/location identifier, then you have already given them access to the information that will identify your name. Electoral records, ATO records. All ‘linked’

They’re not “at it again” Bernard, they’re always “at it.” Various household surveys are going on all the time. Most of them are compulsory under the Census and Statistics Act and some can be done on line while others need a face-to-face interview with an ABS interviewer. I’ve retired from the ABS but I haven’t heard of any changes in the way this is done. There’s no mystery about how a household gets selected; if you look down the page of the document linked below you can get an outline of how it works. Nobody is targeted although I often had to explain at length to callers who believed they were being targeted.
http://www.abs.gov.au/websitedbs/d3310114.nsf/4a256353001af3ed4b2562bb00121564/de8ba33b760d9c9fca2571060079d60a!opendocument

Re the claim that the information will not be used for any other purpose – and how many Centrelink ‘customers’ were aware that protecting Todger’s arse was such a purpose – don’t forget that ABS has cheerfully admitted that the data will be sold to commercial entities.

I agree!!!! I think Australia should make policy without any evidence or data. How much worse can it possibly get? We currently ignore most of it anyway.