The unpopularity of Tony Abbott, declining business donations and the failure of the Liberal Party to retain government in several states has left the party with diminishing prospects of successfully battling Labor in the crucial area of campaign spending.

Both major parties went into the 2016 election underdone financially. In the previous two election years, federal Labor could call on $37 million and $38 million respectively. In 2015-16, however, it received just $15.4 million. But, remarkably, that was greater than the coffers of the federal Liberal Party, which surrendered its usual fundraising dominance over Labor: it earned just $14.7 million in revenue — down from $43 million in 2013-14 and and $36 million in 2010-11. It was the lowest election year revenue for the federal Liberals since the 1990s.

The opaque nature of the parties’ financial reports to the Australian Electoral Commission makes comparisons difficult, but the Liberal Party collectively conducted a federal election campaign with the kind of funding level normally associated with a non-election year. 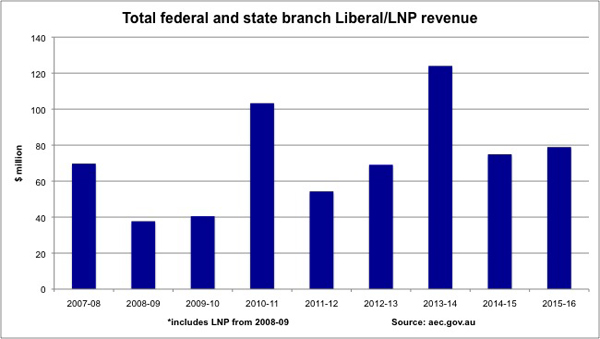 In contrast, the ALP, which relies on a steady flow of union donations, has lower election-year peaks but hasn’t fallen below $50 million in total annual revenue across its branches since 2009, meaning state branches could pick up some campaigning slack.

Moreover, the Liberal Party’s key branches now have higher debt than they’re used to carrying. The federal branch’s debt at the end of 2015-16 debt is over $12 million; the NSW branch $10.5 million, the Victorian branch $7.5 million, its biggest ever; the Liberal National Party — which since its creation has been a funding powerhouse — reported nearly $2 million in debt — when normally it carries well under a million dollars.

This is partly the result of the timing of the election on July 2. Federal Labor, for example, reported a massive $25 million in debt, but $17 million of that was to its ad agency Ikon, which had not been paid on June 30, while the campaign was still running (although TV advertising had finished by that time). Similarly, the federal Liberal Party owed $7 million to Starcom Mediavest. The NSW Liberal Party will also benefit from the payment of $3.8 million in public funding withheld because of the Free Enterprise Foundation scandal, this financial year.

But as we know from Malcolm Turnbull’s payment of $1.75 million to the Liberal Party and the fact that federal director Tony Nutt had to work for nothing when he started in that job in October 2015, the party struggled for funds and was underfunded for the election campaign, due to the drying up of business donations. Even the Western Australian branch, which was facing an election in 2017, carried a debt of nearly a million dollars into this financial year.

And losing office creates a vicious circle for fundraising. In 2009 and 2010, the NSW Liberals struggled to raise $6 million and $7 million respectively. Now the NSW branch generates between $10 million and $20 million even outside election years, as it can offer donors access to decision-makers. On the other hand, LNP revenue — routinely between $17 million and $20 million — slumped to less than $14 million after it lost power. It means the party has less capacity to move funding around between divisions to help those facing campaigns. As the 2016 federal election campaign showed, cash is the lifeblood of modern campaigning, and the Liberal Party faces lean times.

What a business – investors are hard to find?

And, as they keep telling us, they are the genii when it comes to free market, fiscal rectitude.
Henry Ergas, anyone?