Brandis runs down the clock ... it's the (Newtown) vibe ... blurred electoral lines ...

Brandis runs down the clock. It’s a race against time now for Labor to get hold of Attorney-General George Brandis’ 2014 diary. Yesterday, shadow attorney-general Mark Dreyfus said he intended to take Brandis back to court for failing to comply with an order by the Federal Court six months ago that the AG process a freedom of information request for his diary.

Without dusting off Ms Tips’ tinfoil hat, the minister’s continual delay in processing the request could be seen as running down the clock before Brandis’ widely expected move out of the ministry — and possible move to London. Because the FOI is still in the “processing” stage, if Brandis leaves his post, the request would then be passed on to his successor. In at least three previous FOI cases — for Tony Abbott’s diary, for Andrew Robb’s diary, and for Sussan Ley’s diary — when these requests were passed on, the new minister’s office suddenly claimed it did not have access to the diary and could not complete the request.

It is an anomaly of FOI law that documents within the scope of a request might not be retained while the request is being processed. Neither the department nor the minister has any oversight over documents to ensure that they are retained as the ministry is reshuffled. Maybe Brandis can see a silver lining to getting shafted from being the country’s top law officer?

“There is no evidence of federal factors playing a role there,” Prime Minister Malcolm Turnbull said on Sunday when asked if he and his Canberra colleagues had put his mate Colin Barnett out of a job. A Crikey tipster thought this was funny when in 2013, Turnbull’s deputy Liberal leader (and proud Sandgroper) Julie Bishop said the federal branch of the Labor Party had damaged WA Labor’s chances:

“This result is reflecting on Labor’s brand. Everybody says Mark McGowan ran a good campaign, but Labor’s brand in this state is toxic, and there is a Gillard factor,” Bishop said four years ago. How times change.

It’s the vibe, your honour. NSW Greens MP Jenny Leong has represented the seat of Newtown since its introduction in 2015, and it is exactly what you would expect from a Greens electorate. The area is described by Anthony Green as the state’s “newest, smallest and funkiest electorate”.

Newtown has a particular feel about it, and in response to concerns about the electorate’s safety and character, Leong — in conjunction with  the Newtown Neighbourhood Centre, Newtown Precinct Business Association and the AIDS Council of NSW — is holding a “protecting the Newtown Vibe” (yes, “vibe” is capitalised in the Newtown context, apparently) community meeting tomorrow night. She has also put out a community survey polling constituents on threats to this Newtown Vibe. It is a follow-up to the meeting of the same name back in June 2015. Attendees will be hearing what Vibe protection measures have been implemented since then, and “hear results of the Community Survey re the Vibe.” 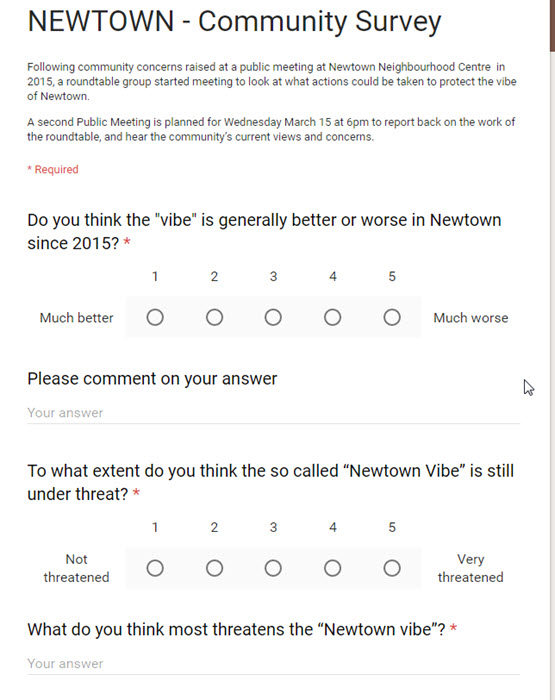 Ms Tips will be interested to see how many of the suggestions put forward by the public during the first meeting have been implemented. Alongside calls for better and more visible policing and community organisations partnering with pubs to create a more inclusive atmosphere, there were calls for the decriminalising of street theatre (“Street theatre is invisible in Sydney, and so presumably against the law. Laws can be changed.”) and making all bouncers female. Personally, though, we think the attendee who wrote “violent responses should not be dismissed. The failure of liberalism requires us to ‘suspend’ its frameworks, and to abandon ‘law and order'” might be disappointed. Will this forum also decide to ban music videos filmed by Coldplay?

Blurred lines. In the ongoing controversy over the Coopers brewery’s partnership with the Bible Society, federal Liberal MP for the seat of Goldstein, Tim Wilson, told Ms Tips’ colleague Josh Taylor yesterday that although he had participated in the video, it’s not his usual tipple:

“I agreed to do it for the Bible Society. I have no idea what arrangements exist between Coopers and the Bible Society. Personally, I don’t drink Coopers. I prefer a refreshing Mornington Brewery Pale Ale or a Bad Shepherd Pale Ale from Cheltenham,” he said yesterday.

One of our tipsters who is familiar with the south-eastern suburbs of Melbourne, which Wilson represents, thought it was admirable that the MP had managed to name-check beers from the local area. The only problem is, neither the Mornington Brewery nor the Bad Shepherd Brewing Co is actually in Wilson’s electorate — Mornington is in Dunkley, while Cheltenham is in Hotham. Wilson could have named the Black Heart Brewery in Brighton — right in the middle of Goldstein and with a few pale ales Wilson might like.

Say what you like about George – but he is one cunning old toad?

What on earth is in Brandis’s diary that he is hell-bent on concealing it?

I’ve often thought that the rason he doesn’t want it revealed is because it will be mostly empty and show what a useless sloth & sluggard he has been.