Good morning, early birds. The decimation of the Western Australian Coalition is not looking good for Malcolm Turnbull, and Elon Musk wants to solve South Australia’s energy woes. It’s the news you need to know, with Cassidy Knowlton and Joseph Wilson.

ALL RIOT ON THE WESTERN FRONT

The Western Australian Coalition was decisively thrown out on its ears on Saturday, and the Liberal Party is split over whether it was One Nation preferences that were the deciding factor. WA Labor now hold at least 40 of the 59 seats in the lower house, with the Coalition expected to hold just 19. The Liberals suffered a 16% swing (and as high as 24% in some seats), and the Nationals got a belting of 13%.

The One Nation preference deal that former WA premier Colin Barnett thought would save a party in dire electoral straits turned out to have the opposite effect, with One Nation taking no lower house seats and just one or two in the upper house. Pauline Hanson‘s party won less than 5% of the vote. Many, including Deputy Premier Barnaby Joyce, are fuming about the deal, calling it “a mistake”, and there are calls within the Liberal Party for Turnbull to rule out such a deal at the next federal election. Influential federal Liberal backbencher Tim Wilson was among several who broke with the party line, saying in the Fairfax papers:  “When we do a preference deal with One Nation we legitimise them and get distracted as the folly of many of their policies are exposed. The WA election shows there isn’t a vast bulk of reactionary voters waiting to be embraced as part of the mainstream.”

Finance Minister Matthias Cormann defended the deal he helped negotiate, but Pauline Hanson herself wishes she could turn back time: “Doing the deal with the Libs has done damage to us, in all honesty. It was a mistake.”

Turnbull, though, is not ready to rule out a similar deal at the federal level. Declaring that the WA election had been lost as a result of “state issues” exclusively, the Prime Minister would not rule out a One Nation deal: “The next federal election is more than two years away and all preference divisions will be considered by the party organisation closer to an election.”

Why would he consider a deal that is splitting an already fractured party room and alienating his Coalition partners? The Daily Telegraph contains a clue, with a story that internal Labor polling shows support for One Nation is as high as 21% in some seats in western Sydney. And everyone knows western Sydney is where federal elections are won and lost.

MUSK STICKS HIS HAND OUT TO KEEP THE LIGHTS ON

Tesla entrepreneur Elon Musk is hoping to ride to the rescue of South Australia’s shaky electricity grid as the company enters a bidding war to build a battery farm in the state. Musk said on Friday Tesla could complete the work within 100 days “or it’s free”, and he spoke with Premier Jay Weatherill about the project on Saturday. The California-based company would be competing against at least three local firms for the contract, but Musk certainly has Turnbull’s ear, with the pair speaking on Sunday, followed by a flood of self-congratulatory tweets that lasted for almost an hour: 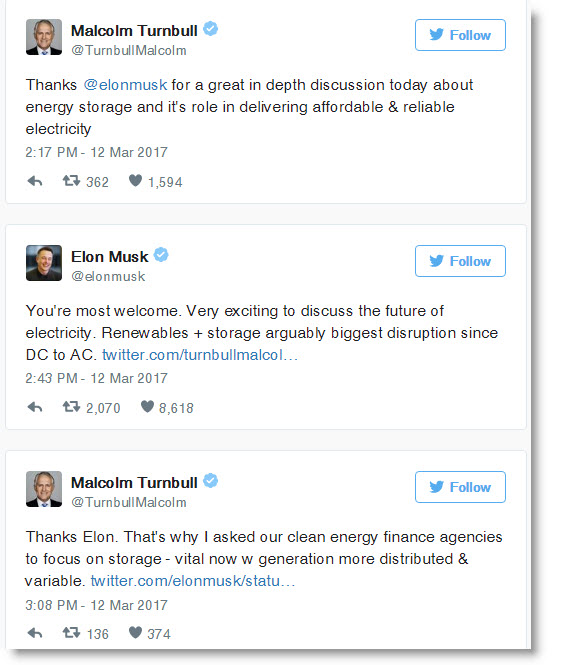 Atlassian co-founder Michael Cannon-Brookes has offered political and financial support for the project. Upon reading the news of Musk’s proposal in the Financial Review, Cannon-Brookes reached out directly to Musk on Twitter. 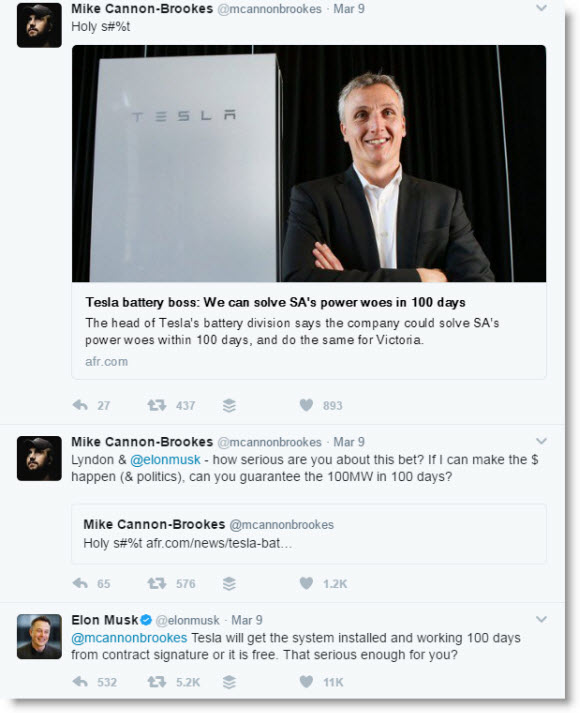 Bali: A panel of judges will deliver a verdict as to whether Byron Bay woman Sara Connor is guilty of murdering a Balinese police offer on Kuta beach. Connor has consistently protested her innocence, saying she was at the wrong place at the wrong time and had nothing to do with the death of Wayan Sudarsa. Connor and her boyfriend, British DJ David Taylor, are accused of beating the police officer to death, but Connor and Taylor both say Taylor acted alone.

Western Australia: Counting will resume today for the result of Saturday night’s state election, in both the upper house and a few seats in the lower. The ABC’s Antony Green has outlined the seats to watch today.

Brisbane: Aboriginal groups mounting a native title claim against the Adani Carmichael coal mine will hold a press conference in Brisbane, ahead of giving evidence to a Senate inquiry into the matter.

Chairman of the House Intelligence Committee, Republican representative Devin Nunes, has called on Donald Trump to provide evidence of his wiretapping claim. This follows an unofficial but very public “put up or shut up” from Senator John McCain on the same issue.

“I basically have zero contact with him at this point.” said Donald Trump Jr. at a fundraiser in Dallas, proving that it’s lonely at the top, and that there couldn’t possibly be any conflict of interest for the President and his family businesses.

Australia’s discriminatory constitution would allow a Trump-style travel ban — George Williams (Sydney Morning Herald): “Today, Australia has the only constitution in the democratic world that authorises Parliament to make laws imposing negative treatment on a group due to their race.”

WA election: Why the WA wipeout is good for Malcolm Turnbull — Laura Tingle (Australian Financial Review $): “This was an election fought on state rather than federal issues. An old government. A government which could no longer claim respectable economic credentials. A government trying to sell off the electricity grid. An economy suffering a very bad resources boom hangover.”

Bill Leak: doublespeak at the trial of a freethinker — Jennifer Oriel (The Australian $): “Section 18C is an act of violence against those who tell the truth. It is, as the slow torture of Bill Leak revealed, a totalitarian tool fashioned by bullies determined to punish creative geniuses who refuse to toe the PC party line.”

Don’t want to vaccinate your kids? I have a solution for you – Bianca Hall (Sydney Morning Herald): “Too often, the vaccination ‘debate’ is framed as being one of individual choice. But there are a lot of people who do not have a choice and who should be able to expect to be protected by herd immunity.”

Dozens were killed and more than 100 wounded in a double bombing near the Bab al-Saghir cemetery in Damascus, where several prominent religious figures are buried. Most of the victims were Iraqi Shia pilgrims. — Al Jazeera

Turkish-Dutch relations continued to deteriorate, with Turkish President Recep Tayyip Erdogan threatening that the Netherlands would “pay the price” for barring two of Turkey’s ministers from entering the Netherlands. The threats follow tensions around European countries preventing Turkish rallies in support of an upcoming Turkish referendum, which if successful would greatly expand Erdogan’s powers. — BBC

Welcome to Pleistocene Park (The Atlantic) “[Geneticist George] Church has been thinking about making mammoths for some time, but he accelerated his efforts in 2013, after meeting Sergey Zimov at a de-extinction conference in Washington, D.C. Between sessions, Sergey pitched him on his plan to keep Beringia’s permafrost frozen by giving it a top coat of Ice Age grassland. When he explained the mammoth’s crucial role in that ecosystem, Church felt compelled to help. He told me he hopes to deliver the first woolly mammoth to Pleistocene Park within a decade.”

Big Tobacco Has Caught Startup Fever (Bloomberg) “Since the rise of e-cigarettes, it’s no longer such a stretch to imagine a messianic engineer in a garage somewhere inventing a nicotine-delivery gadget capable of doing to cigarettes what Uber did to taxicabs or Napster did to the compact disc. If your profits hinge on nicotine addicts, you might want that visionary in your employ.”

For Brazil’s Zika Families, a Life of Struggle and Scares (The New York Times $) “Now, new waves of impaired children, who appeared normal at birth, are being identified. For some, microcephaly and other symptoms are emerging months later, as their brains, with malformations or debilitated or destroyed cells, fail to develop enough to match their physical growth. Experts predict there will be more children who still seem unaffected, but whose problems will surface in toddlerhood or their school years.”