In 2013, the Liberal Party dominated Australian politics. Now it is in disarray, riven by factions, struggling to fend off a resurgent Labor, and vexed by One Nation. Bernard Keane and Josh Taylor examine where it went wrong.

On election night in 2013, the Liberal Party dominated Australian politics. Tony Abbott has just thrashed Labor, picking up 90 seats. The Liberals governed in the two biggest states, and the LNP under Campbell Newman had nearly obliterated Queensland Labor the year before; the Liberals governed in the boom state of Western Australia. Hopes were high that the Weatherill government would be dispatched in South Australia, and Labor’s time in Tasmania looked over. A long period of Liberal ascendancy appeared certain.

[Brace yourself for a Liberal whitewash, from east to west]

Three and half years later, the Liberal Party faces its worst crisis since 2007, with a massive loss in Western Australia and a dire position at the federal level leaving it struggling to compete with Labor across the country. The party went backwards at its first federal electoral test — an unwanted Western Australia Senate byelection in 2014. One by one, conservative governments have fallen since then.

It now only governs in NSW — under the party’s third leader since 2014 — Tasmania and, barely, at the federal level, with constant speculation that Malcolm Turnbull’s one-seat majority might vanish. The party has had only two victories since 2013: in Tasmania, where a decrepit Labor government was ousted, and in NSW, where Mike Baird handily beat a Labor Party still recovering from an extraordinary period of blatant corruption. 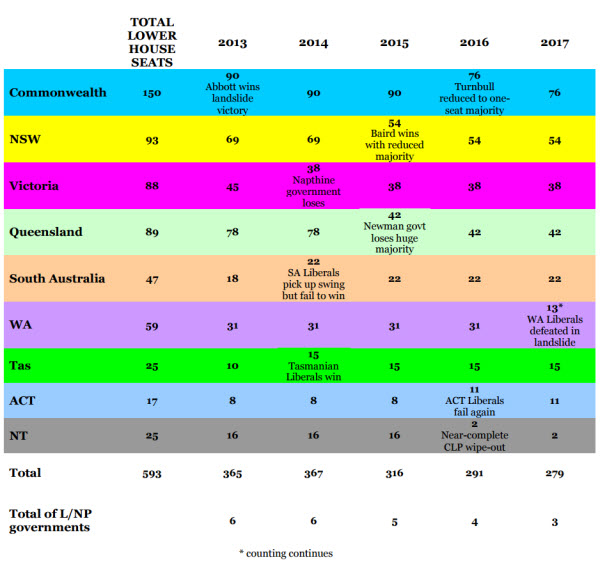 But arguably, the situation is worse than in 2007, when the defeat of the Howard government meant every government in Australia was controlled by Labor. Back then, the Coalition faced ageing governments in the eastern states, and although it had failed to remove the corrupt NSW Labor from Macquarie Street, it could look forward to ousting them under Barry O’Farrell.

Worse, the 2017 generation of Liberals must deal with a problem the 2007 class thought was dead and buried — One Nation, which despite its inept performance in Western Australia, still threatens the Liberal National Party in Queensland. And unlike in 2007, when preliminary moves were underway to create the LNP, there is now serious talk of some form of demerger to enable the Nationals to better fight off the threat from the right in regional Queensland, bringing a decade-long union to an end.

And in the absence of a successful leader such as John Howard (and, briefly, Abbott), the federal party is split between its moderate and hard-right wings. This division has become fused with a personality-based conflict between Abbott and Turnbull. While the Rudd-Gillard conflict wrecked Labor’s second term, it was never motivated by ideology. The Liberal Party must cope with a deep ideological divide centred on competing, vengeful personalities.

Money, factions, ideology and a fractious base have plunged the Liberal Party into its darkest period since the Howard years. In a special series, Crikey will look at the factors behind the crisis besetting one of Australia’s major political institutions.

How does the voter summon up the desire to trust any member of the Liberal Party? If anyone who was watching the TV coverage of the WA rout and the subsequent interview of Mathias Corman, who solemnly swore ignorance of the Liberal Party/One Nation Party preference deal, when he was the person who suggested it. Or to listen to George Brandis denying black is black or white is white.
Why sweat over ways to improve it when the people involved have no intention of following advice?

Has any Coalition government or opposition during this time offered any sort of coherent or positive policy platform to voters during this time?
I guess NSW offered new infrastructure (albeit in exchange for selling existing infrastructure), and “development” (albeit in a way which looks suspiciously as if they are simply favouring their longstanding property developer base).
At a Federal level we have had Abbott sucessfully opposing whatever Labor did from 2010 – 2103, and Abbott/Turnbull in goverment blaming everything on Labor from 2013 onwards. Actual policy work has mainly involved repealing whatever Labor put in place.

Is it possible that voters are reacting to the sense that they have no positive agenda at all? And will the CPG actually notice this and focus on policy issues, or will Mark Kenny announce (yet again) that Turnbull has “changed the narrative” by wearing a leather jacket and offering a soft rebuke to PHON?

In 2017 the LNP only need two slogans to accurately reflect their policy portfolio: “No you can’t!” and “Give me that!” (picture of poverty stricken person in the background on that one)

Mark Kenny is becoming an embarrassment, isn’t he? He REALLY, REALLY wants Turnbull to somehow grow a spine and succeed, but wishing for it very hard doesn’t seem to be working.

Bernard and Josh…don’t waste your time on a ‘special series’ on the LNP. Just more BS on yesterday’s men (mostly) in this putrid government. Hopefully, they will suffer the same fate as in WA.
How about some articles on the policy positions of the major parties? At least it would put to rest the mantra of them ‘all being the same’…that’s just a load of hogwash which the MSM continues to promote.
Just another form of ‘its all Labor’s fault’!!

CML – if you can find a ciggie paper difference between the policies of Talcum and your great-great-etc grandnephew, gumBoil Shlernt I’m sure that we’d all be fascinated to learn.
Lest you forget, Tweedledumber supported Tweedledumbest in the metadata, surveillance, concentration camp, welfare & wage rate cuts, Adani & fracking etc ad naueam legislation.
A plague, pox & flesh eating virus take them all.
Vote Independent or Green or suffer more of the same.

Typical green vent. No substance a lot of bulls##t.

AR, wouldn’t it be great to have people with the guts to differ and the ticker to lead!

Bit of a rave really AR, but Mr Shorten (to you please) and co put a huge effort into developing policy, you can find it at the ALP site in the National Platform and ‘The 100 Poicies’, as well as else where; all of which led to the LNP policy campaign in the last election consisting solely of attacks on the ALP policies which were being released steadily in the lead up to the campaign.

You are right CML . when the Press talk generally of the reasons for the flight to One Nation they do generalize the two main Parties are offering basically the same.
Their is a vast difference in the underlying philophosy of each Party.
Conservatives are still the “I’m alright Jack” Party and believe trickle down economics works.
Yep it’s always Labor’s fault.

How about a suggestion that it is their antediluvian planet desteoying attitude to climate change that may be the real elephant in the ointment (to mangle a couple of cliches)?

With 75 % of the general Auustralian population and 90% of the rural population wanting something done, what does Turnbull offer?

I really think that this is a self self- destructive and mystifying stance to take politically. What are they thinking? It can’t just be fossil fuel donations.
How does the tiny rump of deeply conservative dopes wield so much power?
One day we will find out.
But not quickly enough to save the Barrier Reef. It’s a goner.

Of course it’s fossil fuel donations. Who else, bar the banks, will give them the money they need to fight the next election.

Firstly, do you guys ever get a day off?

But what I wanted to ask is, who are the moderates in the LNP, why do we never hear from them and what are the policies this group advocate?

btw, Have to agree with CML, we’d all be better off if policies rather than party, politics & personality was the focus.

That is a great question about the “moderates”.

I suppose that some of the less smelly may be viewed that way, but only by comparison with their fellow travelers?

Jan
The moderates have been sidelined. I’m no fan of the LNP but there are decent people in that party who are slowly but surely being weeded out by the alt-right. Turnbulls biggest problem is managing this growing, noisy and totally un-empathic rump that seems to have a stranglehold not just on LNP policy but the national narrative as well. The successful harpooning of an effective carbon pricing policy on behalf of their flat-earthers and mining donors and ineffective action on SSM on behalf of their orthodox Christian base ( yes Christian….not Islamic) when these two examples are clearly supported by the population. Should the ALP remove Shorten and his ACTU baggage……then they are gone big time. Having said that the ALP lacks ticker and if it’s one thing that the WA poll shows its that the vast majority of the electorate want policies that promote inclusiveness, value education and tackle climate change. It’s not hard.