The Australian begged Sandgropers to give Colin Barnett another chance, and Andrew Bolt thinks Malcolm Turnbull didn't do enough to save him. But pretty much everyone agrees, WA was just sick of the damn Liberals.

Across the country, commentators are pretty much in agreement on what’s behind Labor’s landslide victory in the Western Australian election on Saturday.

“The ‘it’s time’ factor best encapsulates the explanation for Western Australia’s election outcome, but the size of the defeat adds complexity to the analysis,”

The West Australian put its support behind Labor in its editorial on Friday, and today Gary Adshead writes that as well as needing a change, voters wanted a succession plan for the leadership that was not forthcoming.

The Liberals’ loss of government was expected, but the Oz begged its WA readers to give Barnett another chance on Friday: 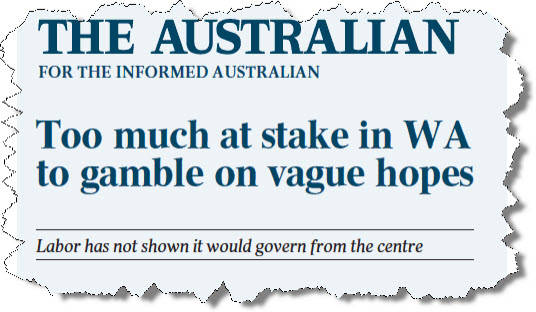 “However aggrieved West Australians may be with Mr Barnett, who has failed to develop a succession plan, voters should be careful in what they wish for by turning to Labor or to One Nation. If anything, the campaign has refocused the Liberal Party’s thinking and its plan is sound. Voters would best serve their own interests by retaining the status quo.”

The West Australian took exception to the national broadsheet leaping into WA politics:

“Rupert Murdoch’s great vanity project, which for decades dominated the nation’s journalistic landscape, has lost the plot. That the self-professed powerhouse of Australian journalism could endorse the Barnett government for a third term shows the people running the paper have no feel for WA. That voters did the polar opposite of what The Australian suggested is yet more proof that the paper’s power is vastly overstated.”

Andrew Bolt reckons Prime Minister Malcolm Turnbull is to blame, even though he helped somewhat by staying away from the campaign.

“And, yes, Turnbull stayed far away during the campaign, dropping in on Perth for just one visit that lasted less than a day. But that visit alone said so much to federal MPs desperately needing a leader who can campaign for their political lives. Turnbull campaigned horribly in last year’s federal election, nearly losing, and last month all but killed Barnett, too.”

But even Bolt concedes Barnett had done his dash:

“When voters are over you, it really is over. There really is almost no way back.”

The other big issue in the result is, of course, One Nation’s failure to win any lower house seats, and its very average performance in the upper house.

“Forget the spin that Turnbull was actually helped by the WA result because Pauline Hanson was humbled and Turnbull’s Right-wing critics put in their place. That wishful thinking by Leftist journalists centres on the claim that the WA Liberals were tainted and smashed by their preference deal with Hanson’s One Nation party. In fact, the WA Liberals were in much the same desperate strife in the polls for the past year. The Liberals didn’t crash because they preferenced One Nation; they preferenced One Nation because they’d crashed.”

As recently as Wednesday, former Tony Abbott adviser and Sky News commentator Peta Credlin was certain One Nation would be a great success in WA. 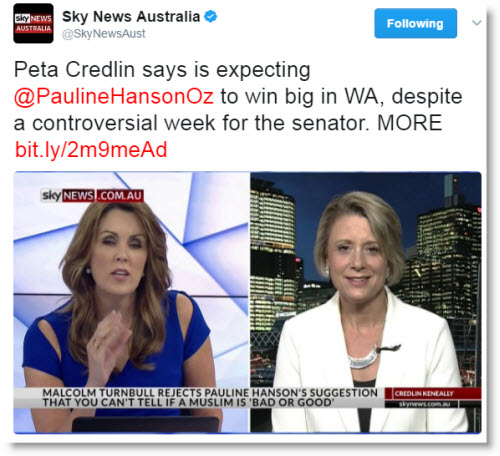 This morning, Bolt has continued his prolific blogging, saying he thinks the “lefties” writing off One Nation are premature — according to ABC election analyst Antony Green, the party won 8% in seats it contested. Says Bolt:

“Journalists writing off One Nation are writing what they’d love to believe rather than the objective truth. I expect she will learn and improve, although there’s no doubt she’ll be and feel bruised.”

The alt-right is singed – where do we look?

So much WA election coverage, consistently avoiding the issue that conservatives, the LNP and media lickspittles like The Australian love to trumpet against failed ALP governments – ECONOMIC MANAGEMENT! Passing reference only for the eagle eyed. All that windfall money from the massive mining boom, squandered, massive unemployment, terrible youth unemployment, 35 Billion deficit, insignificant or botched infrastructure projects.
As with all LNP governments since the ’50’s, they failed to put anything back in to the place. As for the mainstream media and the Federal LNP – Look Over There ! it’s Hanson, no, wait, it’s Time, certainly not economic mismanagement from one of their own.