South Australian beer brewer Coopers has denied its support for a Bible Society video featuring two Liberal MPs drinking the company’s beer in what appeared to be a sponsored debate about marriage equality. 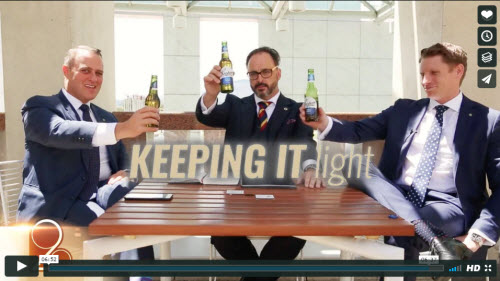 On Friday, Crikey first reported on the unusual video produced by the Bible Society, with Liberal MPs Tim Wilson and Andrew Hastie debating issues in the Queens Terrace on the top floor of Parliament House, with promotion of a Coopers beer produced especially for the anniversary of the Bible Society. The short video featured numerous glamour shots of the beer as the wet and dry Liberals debated issues like marriage equality, with the host attempting to draw out the most extreme sides of the debate.

Since our story, there have been the usual calls to boycott Coopers for its sponsorship of the video, forcing the company to release a statement on the weekend that it wasn’t “trying to push a religious message” with the commemorative light beers.

“We want you to know that Coopers did not give permission for our Premium Light beer to feature in, or ‘sponsor’ the Bible Society’s ‘Keeping it Light’ video.” 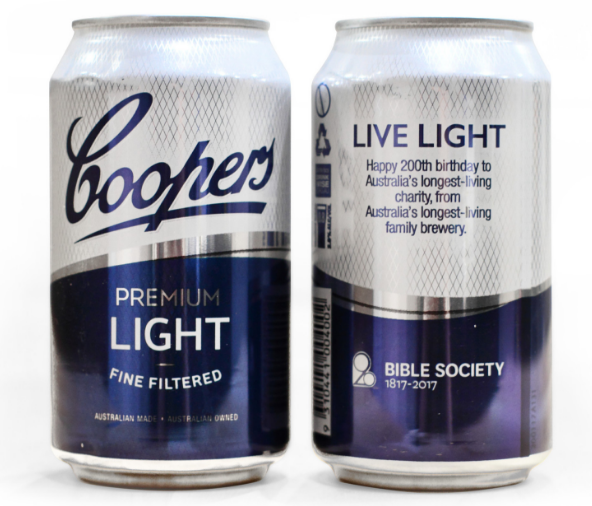 “We respect the beliefs of our community and do not wish to try and change them. Our family brewery is made up of individuals from a number of different backgrounds, all of whom hold differing views on politics and religion, which we think is reflective of the wider community.”

It is a curious statement for a company that has a long history of donating to Christian causes. As others have noted, Coopers is an unashamedly Christian outfit. As part of the 200th anniversary celebrations for the Bible Society, Coopers MD Tim Cooper also provided a video of himself reading a Bible verse for Bible Society.

The reason that Coopers may be trying to make it clear it didn’t give permission to “sponsor” the video is because it was filmed in Parliament House.

It is against the rules of Parliament House to film in the building for “political party advertising or election campaigns; satire or ridicule; or commercial sponsorship or commercial advertising”.

We attempted to contact the Usher of the Black Rod — as one of the overseers for media guidelines in the Parliament — but did not hear back due to the Canberra Day public holiday.

Coopers also has a long history of donating to the Liberal Party. Since 2000, the company or its owners have donated well over $100,000 to the Liberal Party. Greens Senator Lee Rhiannon questioned what the Liberals were getting out of appearing in the video in the first place: “I am interested to know who paid for the video, and what was in it for the Liberals,” she told Crikey. “These adverts would be a turn off for most people. The public are alert to cash for comment, and now this attempt to use alcohol for comment reflects badly on the Liberal Party.”

Rhiannon says Coopers has long been intervening in state and federal politics backing the Coalition’s position.

“The friendship between Coopers and the Liberal Party is not news to everybody — they have a long history of being a reliable and generous donor to the Liberal Party, they have publicly called for a nuclear waste dump in South Australia and intervened on the renewable energy debate.”

Coopers chairman Glenn Cooper said last month that the state government’s policy on renewable energy was foolish and would cost the state jobs.

Wilson told Crikey he had agreed to participate in the video with the Bible Society and had no idea of Coopers’ involvement.

“I agreed to do it for the Bible Society. I have no idea what arrangements exist between Coopers and the Bible Society. Personally, I don’t drink Coopers. I prefer a refreshing Mornington Brewery Pale Ale or a Bad Shepherd Pale Ale from Cheltenham,” he said.

Rules are for plebs.

Bugger the beer, why do MPs have cross party prayer & bible study meetings, Krudd sitting in communion with Kevin “Andrews” Android and other god botherers is more of a threat to decency & democracy.