Literary journal ABR advertised for a ‘gender fellowship’. But when the applications came in, none were deemed good enough.

When the Australian Book Review advertised a “gender fellowship” last year, the news was greeted positively in the local literary scene. The gender fellowship had $7500 funding attached. Winners were promised the opportunity to write a long-form essay on the topic of “gender in contemporary Australian creative writing in all its forms”. But after advertising for award and taking submissions, ABR announced this week that it would not give out the award.

Gender bias in Australian literature is nothing new. Like many other sections of society, Australian letters remains stubbornly male-dominated. According to the Stella Count of reviews of Australian books, conducted in 2015, the majority of reviews in 12 of 13 journals were by men.

The figures are stark. The majority of books written in Australia are by female authors. But the majority of reviews are written by men about male authors. According to the Stella Count, “in most publications, reviews by men of female-authored books constituted between 4–15% of the total review coverage, even when the number of reviews written by male reviewers outnumbered those by female reviewers”. 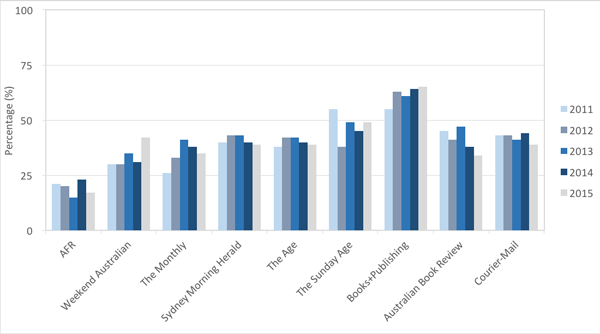 And yet somehow the ABR gender fellowship crashed and burned. To add insult to injury, the news broke on Wednesday – International Women’s Day.

Rose told Crikey that none of the submissions was good enough. “We received some interesting proposals, but none that, in the unanimous view of the selection panel — myself, Anne Edwards, Andrea Goldsmith — addressed the specific criteria in sufficiently new, focused and compelling ways,” he wrote in an email.

ABR will readvertise the fellowship and hopes to attract further submissions. But for those who applied, the decision stings.

The rules for the fellowship asked for considerable effort: a 2000-word application and a discussion with Rose. Crikey spoke to one applicant who spent three weeks working on the application, and who feels understandably disappointed about the end result.

“I spent about three weeks working on this application,” the applicant told us. “It ended up being about three pages long, over 2000 words, which was the requirement. We were encouraged to contact the editor to double check if it fit within the guidelines, and I did.”

“I was genuinely proud of the specificity and originality of my proposal and received good feedback. The reply I got was sort of insulting.”

Victoria University writer and academic Natalie Kon-yu also applied. The lecturer in literary studies is an expert in feminist literary criticism and has been long-listed for the Vogel prize.

“It just seems wrong to me,” she told Crikey over the phone. “I mean, I’m not saying that my work is so great that I’m surprised I didn’t win, but there are a lot of people who write about gender and literature in Australia. It boggles the mind that no one’s application was good enough.”

Kon-yu also spoke to Rose in the development of her application. She told us she had been urged to apply by friends and colleagues because of the subject. “For me, gender and fiction is what I write about, so many people said to me, ‘Natalie you’d be crazy not to put up for this, it’s right up your alley.’”

The failure to award an applicant strikes many in the literary scene as insulting, given the strength of female writing. Authors like Charlotte Wood, Fiona Wright, Mireille Juchau and Alice Pung continue to represent many of the most exciting voices in Australian narrative. Women are also the dominant consumers of Australian literature, especially fiction.

Rose defends the decision, pointing out that eight of the 14 ABR fellowships so far awarded have gone to women. “Any close reading of the magazine reveals a substantial proportion of female contributors, and a strong presence on our main and advisory boards,” he argues. “That said, like many publications and arts organisations ABR is committed to increasing the percentage of women writers.” 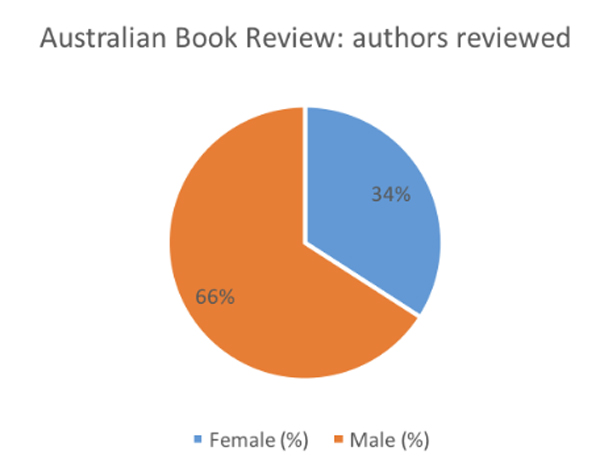 As in so many other fields of cultural endeavour, it seems that in literature, Australia is still a markedly unequal society.

The compliment sandwich, or how Australian literary book reviews really are too nice

Just as we do in legal trials, if the fact finders cannot reach a decision then they must excuse themselves and call for a new trial. Having found themselves at an impasse, Peter Rose, et al should have handed the selection process over to a fresh panel. A major Australian literary publication’s selection panel claiming, “No woman was good enough” is egocentric, self destruction in the extreme.

Hey Crikey, in Friday’s Insider email this article about the lack of reviews of female authors was followed by “recommendations from the bunker” recommending precisely zero articles written by women. Just sayin’…

What is the y-axis on that graph? % of what?