So much for the pro-United Patriot Front protesters who appeared to support Blair Cottrell outside court ... 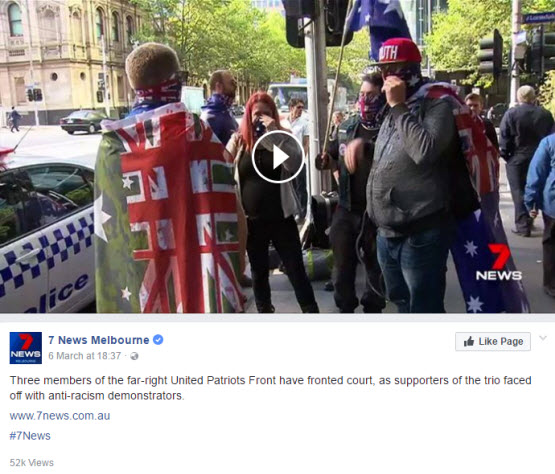 “Among his supporters, a knight, a solider, a man with a blue hat and a borrowed slogan …”

Vivid and poetic description from Channel Seven, describing the assortment of United Patriots Front supporters who gathered outside the trial of Blair Cottrell, Christopher Shortis and Neil Erikson on March 6. The trio are being charged with offensive behaviour after staging a mock beheading in protest of the opening of a mosque in Bendigo. But wait, is there something a bit off about the flag on the soldier’s mask? And just who is that leading the salute of that group?

As it turns out, the protesters draped in flags (not real Australian flags if you look closely) and ranting about free speech outside the court are not UPF supporters at all, but the anti-racist satirical group Million Flag Patriots. Several outlets covered the protest and many of them used footage of the MFP, either explicitly or implicitly identifying them as UPF supporters. In addition to Seven, The Age ran an article about the protests, captioning a picture of the group with “UFP supporters had reportedly planned to give Cottrell a guard of honour”. The story did also note “It’s understood a portion of the crowd were protesters parodying the extreme right.” The Age has since updated the story to remove that picture, and to clarify another picture containing MFP members is of parody protestors.

Clancy Hanson, the MFP president, told Crikey that members of his group had been approached by the media and made it clear that they were a parody group.

“I believe they reported that we were nationalists anyway because it made for more easily packaged, digestible viewing.” Hanson said the man in the “Make Australia Great Again” hat was not part of his group. Nine News Melbourne ran footage of the protest but focused on the left-wing protesters and didn’t use footage of the MFP. Channel Seven was approached for comment, but did not respond before deadline. — Charlie Lewis

The MFP’s Clancy Hanson, wouldn’t be any relation to Erne O’Malley would he?