Pauline Hanson's One Nation demands an extraordinary level of control over its candidates, including kicking candidates off their own Facebook pages and demands that they cull their followers lists to approved people only, writes freelance journalist Tom Ravlic.

As news of One Nation’s infighting and tensions continue to dominate headlines, Crikey can reveal Pauline Hanson’s party insists on total control over candidates’ social media presence, including taking away candidates’ administrator privileges to their own Facebook pages and demanding that they remove potential spies and traitors from their follower lists.

An email exchange between disendorsed Western Australian candidate Sandy Baraiolo to One Nation adviser James Ashby and staffer Aidan Nagle, before the party disendorsed her, reveal One Nation demanded her Facebook password and then took control over the page. Baraiolo also made her disappointment known in an email to Hanson directly.

The emails reveal that Baraiolo:

Baraiolo then set up a separate Facebook page, and a teleconference was held on February 20 between Hanson, Nagle, Ashby and Baraiolo in order to try to resolve the issue. Following the call Baraiolo agreed to delete the separate page in exchange for being made an editor — though not an administrator — on the initial page.

In an email on February 21, Baraiolo wrote:

“In a phone call Monday 20th February 2017 at 12:37pm with yourself James and Senator Hanson during the conversation it was confirmed by Senator Hanson I am the endorsed candidate for the seat of Thornlie, it was also my clear understanding I would be reinstated by 2pm Perth time to both Facebook and the official PHON page as per her instructions.  I confirm the Facebook page editor access was granted at 3:46pm Perth time.

“However, the reinstatement of my profile on the Pauline Hanson’s One nation official website and or Facebook page is denied. IN addition, Aiden in my belief is placing undue demands and expectations, if I don’t do as requested I won’t get election material as promised.  THUS, hindering my campaign, which in turn will affect Charles Smith to the upper house seat, this may also effect his campaign.”

She said in that same email that Facebook was in the process of deleting her second page, but that deleting an account from Facebook takes 14 days. Baraiolo was dumped as a candidate after she criticised the One Nation-Liberal preference deal.

Other One Nation candidates have complained of similar treatment.

Former candidate Peter Rogers said that the party had required access to Facebook profiles to bring the branding and information on One Nation up to date for the 2018 Queensland election campaign but the changes went further than he envisaged.

“The party asked candidates to submit their personal login password to their Facebook accounts and from there, the party added their own accounts onto my campaign page and removed my administration rights. I told party administration that no changes were to be made, apart from branding updates, without my permission, but I have been totally ignored,” Rogers told Crikey.

“The party has failed to understand … that candidate campaign pages from the 2016 election are owned by each candidate and is their intellectual property as each candidate had created the posts.  There is also no clause within the candidate contract that states that the pages were the property of the party. Furthermore, the newly provided One Nation social media policy and contract provides no clause to mention about the party’s intent to manage and take over the administration rights to every candidate page.”

Rogers, who was disendorsed after a blog post written by a third party was published on his website denying the Port Arthur massacre, has kept periodic screenshots to have an audit trail of the changes made to his Facebook page by One Nation without his permission. The screenshots demonstrate that there are two official admin accounts — PhonOne HO and PhonTwo HO — that are used to control these Facebook pages. 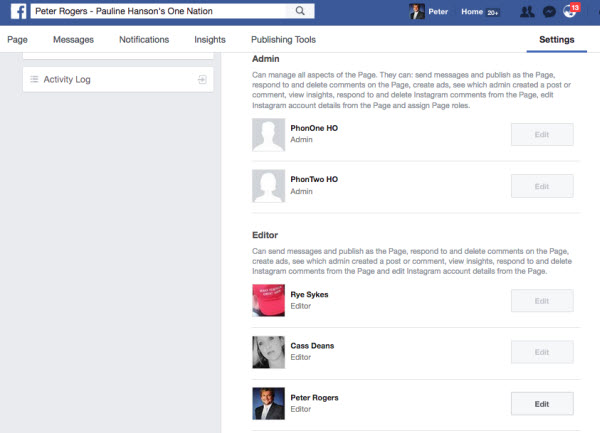 One Nation has also adopted a policy of instructing people to remove people from their Facebook friends lists who speak out against the party in the media.

“Guys, we shouldn’t be friends with people who are saying baloney things about us in the media,” a Facebook post from January 16 the account called PhonOne HO states. “I have informed you all to only add friends and people you know and trust. Be careful, remove people you do not trust. They may leak things that you do not want out in the limelight.” 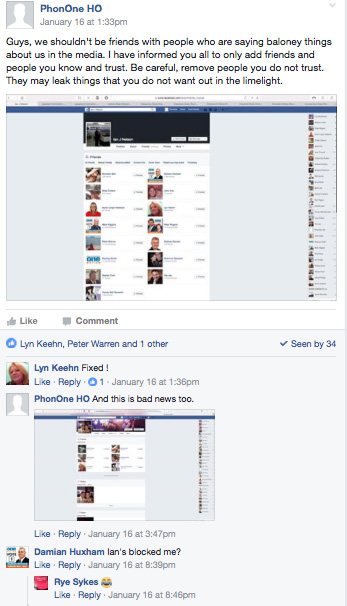 This message is consistent with the general directive to candidates during teleconferences not to talk with those who have been disendorsed by One Nation.

To be fair, Hanson-Ashby followers do have to appear sort of normal – before they get into ‘the big house’ – or no one would vote them in …. after they get in anything goes.

Once again, I am so glad to have not the slightest inkling of a hint of a clue as to sozial meeja, FarceBuch etc.