Centrelink has taken to some Brandis-level redefining of the English language to claim that debt notices are just "clarification" letters.

When is a notice that you owe debt to Centrelink not a debt notice? When it is an “initiating letter”, according to Department of Human Services secretary Kathryn Campbell.

This claim came as part of the department’s lengthy defence of Centrelink’s automated debt notices scheme before a Senate committee on Wednesday. The letters claiming some Centrelink recipients owed thousands of dollars when they, in fact, did not were not inaccurate or in error, according to Campbell, but were just seeking clarification.

“I think we underestimated how many people would not clarify,” Campbell told a Senate committee on the matter on Wednesday, suggesting it was up to the people targeted by Centrelink’s automated debt notice system to tell them that the way Centrelink was using ATO data on income earned was incorrect. The data is in a full-year format, and then divided into fortnights by Centrelink to determine whether someone was paid correctly in that fortnightly period. But that method only works when a Centrelink recipient earns the same amount every fortnight for the entire year, which many Centrelink recipients do not.

Labor Senator Murray Watt suggested that the department was  seeking to have a different interpretation of words than most people have, Attorney-General George Brandis-style. Campbell insisted the debt notices were just clarification letters.

“Those letters are about saying ‘we’ve got two sets of information, and we want to clarify that information’,” Campbell said, adding that the first two letters sent were sent via registered mail and if those letters did not reach the intended person, then Centrelink would access other contact information such as electoral roll data to try track down the person. She said Centrelink took those steps before the matter was referred to a debt collector, and that it had reached 6600 people in this way since the automated notice system was put in place.

The department tabled a document revealing more than 36,000 people who initially received letters from Centrelink between July and December last year were later told that they in fact, didn’t owe a debt to Centrelink as the agency had first thought. This, Campbell said, often came by recipients “clarifying” how much they earned in a particular period. 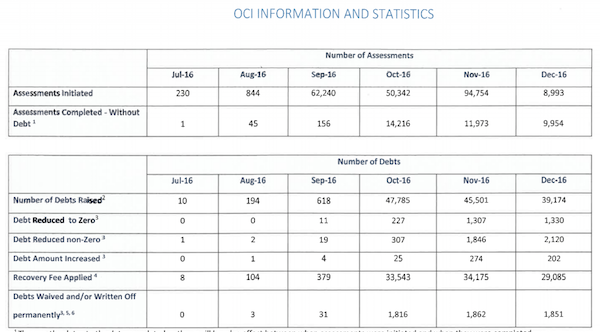 In addition to blaming the people who had received the notices, Campbell also blamed the media for reporting on the issue, leading to a rise in people complaining about notices, and causing some people distress about the notices. The Saturday Paper‘s report on a former Centrelink recipient committing suicide after receiving debt notices was sad, Campbell said, but there were “different dimensions” to how individual cases were reported in the media.

Campbell also admitted that the department monitored emails sent by staff to media to prevent “inappropriate release of information”. She would not comment, however, on the release of blogger Andie Fox’s personal information to the media because the matter was now being considered by the Australian Federal Police.

The department was unable to provide detail on exactly how many people who had received incorrect debt notices had paid up the debt without challenging it, nor whether they would have their debts reassessed.

The government has budgeted for $1.2 billion to be collected back from Centrelink recipients in this financial year, but the committee heard that so far just $300 million had been identified as being repaid, and of that only $24 million had actually been collected. Campbell said this was due, in part, to Centrelink agreeing to repayment programs where some were paying as little as $5 per fortnight off their alleged debts.

“That means there would be a lag,” she said.

For those who dispute the debt, Campbell said that Centrelink offered to reassess it, and could offer to pause the recovery of that debt.

The Australian Taxation Office completely distanced itself from Centrelink’s automated debt notice scheme, telling the committee that it simply provided the employment and wage data to Centrelink and what Centrelink did with the data was up to DHS. The ATO said it also attempted to offer DHS assistance when the issue blew up in December and January, but was told everything was fine.

Shadow assistant treasurer Andrew Leigh asked in a statement whether Human Services Minister Alan Tudge had consulted his Treasury colleagues about the use of ATO data before it was implemented:

“Did Minister Tudge consult his ministerial colleagues about his decision to use tax office data as part of the robo-debt debacle? This mess lays solely at the feet of the Turnbull government, and today we learn a lack of co-ordination and a lack of ministerial oversight has added to the shambles.”

The committee heard that this data was used when Centrelink staff manually conducted data matching before the automated debt notices scheme.

“As a customer/client it is your duty to show us where our system is F***ed Up!”?

So well said Mary. From now on I’ll refer to Politician ‘entitlements’ as mp welfare. I’m also tired of listening to Kate Carnell et al plead for Gas companies to keep their tax breaks ‘cos that’s what they signed up to”. Business is speculation. Is it only employees that have to suck it up when change forces job-loss? IPA-LNP have betrayed Australia/ns in every possible way.

It is nauseating to compare the treatment dished out to Centrelink clients with the way our representatives in parliament are treated when they abuse their welfare benefits – which they call entitlements. No threats, no forced repayment of cash to which they were not entitled, no verbal abuse, no debt collectors. I would like a bet that the so-called representatives sitting in their ivory towers have stolen more from the public purse than clients of Centrelink who receive, by the way, income support during a in crisis of some kind, not welfare.

So well said Mary. From now on I’ll refer to Politician ‘entitlements’ as mp welfare. I’m also tired of listening to Kate Carnell et al plead for Gas companies to keep their tax breaks ‘cos that’s what they signed up to”. Business is speculation. Is it only employees that have to suck it up when change forces job-loss? IPA-LNP have betrayed Australia/ns in every possible way.

Kathryn Campbell will fit right in with this effed up, useless government!

I am fortunate that this does not effect me but I empathise with those caught up in the kafkaesque kontortions of this grubbiment, this abysmal AG and this scandalous software stuff up.
It is not up to the individual to correct a year of supposedly dodgy data if the grubbiment minions are incapable of data matching with all the resources at their disposal. This smacks of many things, the least of which is taxpayers tweaking their total pay downwards, the most likely thing being a dysfunctional department desperately denying their own dumb dithering.

Got my ministers mixed up there for a moment… comment still stands tho!

I still cannot understand how this blatant reversal of our justice system has not brought the robodebt debacle to a grinding halt.
An accuser is obliged to furnish proof of their accusation, it is not required that the accused refute.
The onus of prood is on the accuser.
In this case it is demanding money with menaces, so a criminal offence.
And all the rest from the shyster brigade, for fear of tort, is silence and chirping crickets.

and the onus of proof as well.