There is a war on media, and it’s time for journalism teachers to suit up

Across the country, journalism schools have begun a semester full of fresh cohorts. Eager (bug-eyed) young people ready(ish) to embrace the fierce and fickle world of student journalism.

Facing them will be lecturers who are constantly walking what can feel like the finest of lines: how to impart the skills and attitude needed to embrace myriad future media landscapes, yet be employable right now; how to critically evaluate the place and state of journalism past and present, but walk effectively and passionately into the state of journalism as it is today.

I’ve been asked a few times recently whether Trump, fake news, alternative facts, etc, have provided a new challenge for the teaching of modern journalism. It’s an interesting question.

Let’s start with where we’re at. Trust in both politicians and the media is not high. This on-the-nosedness is apparently contributing to the rise of parties like One Nation (their unofficial slogan for the upcoming WA election, “Think Polio & Putin, think Pauline”, needs a little work, to be honest), other minor parties, and a polarising and divisive national discourse. Or, as former chief justice of the Australian High Court Robert French said last month:

“The spaces left by lack of awareness and misunderstanding are all too readily filled by snake oil salesmen coming in from the hinterland of our civil and political discourses.”

We’ve been spending a lot of time thinking about where we’re at: Trump tweets chaos, chaos tweets Trump; New York Times/Washington Post/ProPublica subscriptions on the rise; politics defining truth rather than truth defining politics — but perhaps not enough time looking at the elements that got us here. As French said, it’s a lack of awareness and misunderstanding that brings us to this maddening but entirely rational point. Awareness and understanding is where we live, and it is the real ball game.

The truth is, it’s not the media, or media educators, furiously reacting to this grave new world; it is the people.

To put it bluntly: good journalism teachers have been focusing on truth as a cornerstone of the relationship between democracy and journalism this whole time. What we’re seeing is a better understanding (re-understanding?) from the people who consume media, of its fundamental purpose.

The fourth estate has never, in its ideal, existed to tell people who to vote for, merely to give them the ability to make an informed choice. Socrates, at the founding of democratic thought and principle, was very concerned about the idea of voting as a free-for-all. The very concept, he argued, rose and fell on the basis of an informed electorate. With it, demagoguery must surely follow.

The study of journalism involves — directly or indirectly — the study of history, politics, economics, philosophy, literature, psychology, anthropology, law, ethics, writing, speaking, thinking, editing, filming, recording, interviewing. It’s so important to the proper functioning of democracy, and to our understanding of the world around us, that the only wonder is why more students — at school or university — aren’t made to study it.

Trump has not just reinvigorated our relationship with truth, he’s allowed audiences to remember the real purpose of good journalism was always to make “them” tell the truth. To keep promises. To govern for all, not just strategic constituencies. Good journalism insists — by its very nature — on good governance above all.

The biggest change for journalism lecturers this semester will be a darkly positive one: not needing to point to some twisted future where a cacophony of lies and newspeak lead to the type of Brexit/Trump votes where the result isn’t as worrying as the lies told to achieve them. Instead we’ll now be able to say: “If we don’t tread softly on the hallowed ground of truth in democracy, it could lead to *gestures broadly at everything*”.

The one word we may be adding or emphasising in our teaching repertoire in 2017 is courage. The challenge against the means and modus of journalism is now more direct and deliberate than at any time in recent history. Fake news is simply the generation and distribution of knowingly untrue stories in order to garner a sense of misunderstanding and/or money. The co-opted Trump version means ‘If your truth conflicts with my politics, you’re a liar’.

Truth, and how to tell it, are the elements of journalism that media educators have long taken for granted, and taught. The real positive now is that audiences may once again be joining us at this base point for our relationship between journalism and democracy. 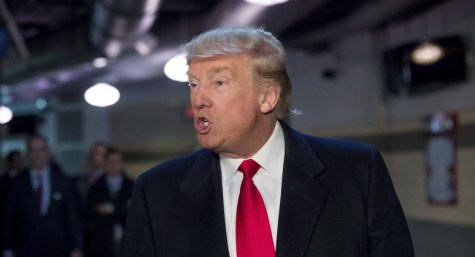 Fake news is not new, and a Senate inquiry into it would be a colossal waste of time

Facebook is a symptom of a broken system, not a cause

There a twice as many journalism graduates in PR for commercial & government flackery than in… what’s the word, oh yeah, journalism.
When Bean Counters Rule, integrity is surplus to requirements.

Can you impart impartiality?

Those flying lumps of coal came out of nowhere. LOL