One Nation backtracks on Family Court. Has One Nation walked away from its policy of abolishing the Family Court and putting men’s rights front and centre in the family law system? One disgruntled One Nation supporter believes so. Having claimed that the Family Court causes men to murder their ex-partners and children out of “frustration” and proposing an array of “reforms” including punishing domestic violence victims with court costs, Pauline Hanson and her party would, you’d reasonably expect, be pushing the policy in the lead-up to the WA state election this weekend. But, strangely, the family law page on its policies site is now a dead link. As our tipster notes, the Wayback Machine, which periodically archives websites, shows a link to the policy was still there in December last year. Did it vanish as a consequence of the party’s election deal with the WA Liberals? We’d be surprised if the two events were linked — but the family law policy is the only policy that has disappeared from the site in that time. 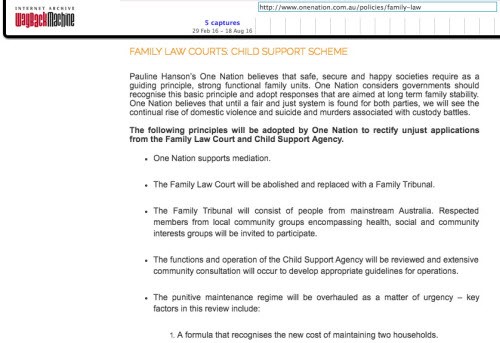 Third time’s a charm. Employment Minister Michaelia Cash found herself in a spot of bother this week when it turned out she hadn’t properly declared ownership of her new house in Perth until asked about it by journos over at Fairfax. Cash bought the house next door to her own property in Floreat on November 4. She then declared ownership of the property as an investment on January 21 this year — almost three months after actually buying the property. 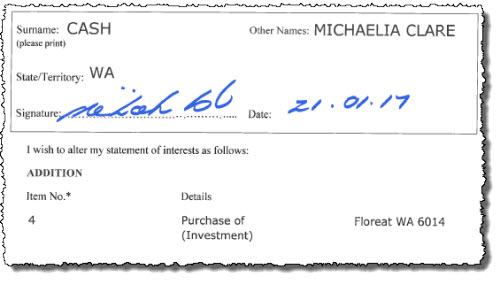 The mortgage on the investment was reported on February 21, meaning both declarations are outside of the 35-day deadline to declare interests. 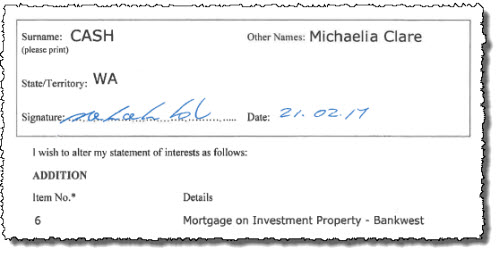 On Monday (the day the story broke) Cash declared that she also receives rental income on the property. 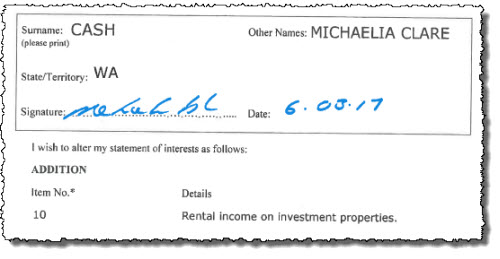 It’s not clear how long rental income had been coming in on the property. It just goes to show persistence is key — if you don’t declare everything on the first or second time, the third time should do it.

Silence is golden. Former PM Julia Gillard wrote an op-ed for The Guardian to mark International Women’s Day on one of her favourite topics — education for disadvantaged women — and it got us thinking about how rarely we hear from Australia’s first female leader. When Peta Credlin revealed the carbon tax was never really a carbon tax? Nothing. At multiple points when policies of her government have been criticised by current government members? Nothing. Compare this to her contemporaries, Kevin Rudd and Tony Abbott, who can’t walk past a microphone without defending their legacies, or leave their social media accounts alone for a day at a time. Is it really women who are too emotional for politics?

Dasher McDasherface. Political book titles are usually a yawn a minute — Gillard, as just mentioned, went with My Story, Tony Abbott had Battlelines and John Howard had Lazarus Rising (although Ms Tips thought that one worked). Senator Sam Dastyari is trying to raise the interest-level though, asking his social media followers to give him ideas and then vote on a shortlist. The three options are:

Our vote is with option C. 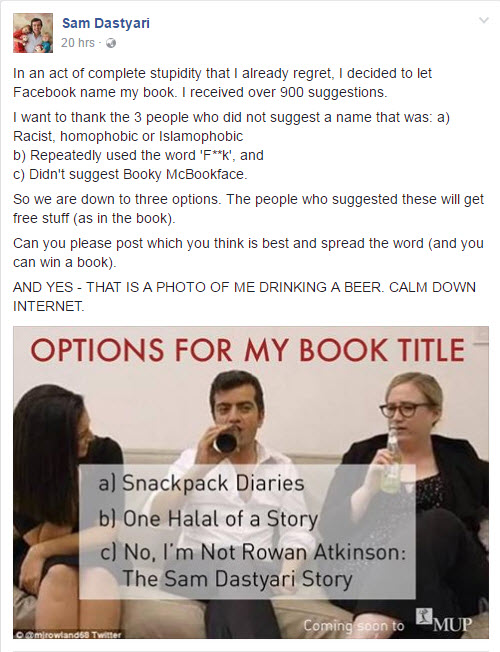 Cash did apologise ….. what did she say about Feeney’s “forgetfulness” re his Northcote investment?