DHS story like Homeland season three. As the warmth of summer gives way to shorter days in the nation’s capital, it’s heartening to see one of the hardy perennials of Canberran bureaucracy, a “Department of Homeland Security-style mega-department” once again in flower. An Aussie DHS last bloomed in 2014 when it was proposed as a vehicle for the monumental ego of then-immigration minister Scott Morrison, only for his colleagues to put him back in his box. Since then, Morrison has underwhelmed as Treasurer and disappeared from leadership calculations. Labor toyed with the idea for years — as far back as Mark Latham’s time. Back then, the Coalition thought a Department of Homeland Security would be “a cynical window-dressing exercise which is going to bog down Australia’s anti-terror efforts in bureaucratic quicksand”.  Not that Morrison — or, now, Peter Dutton — is the only ego involved.

The other giant head in the room is the man responsible for turning Immigration into a paramilitary outfit, secretary “Iron” Mike Pezzullo. Pezzullo would undoubtedly love to run a mega-department — just imagine what billion-dollar contracts it could completely botch! Oh and there’s a fourth ego — that of George “Sadim Touch” Brandis, who is treated in Hartcher’s piece like so much ministerial garbage to be chucked out. Mind you, Tony Abbott did strip Brandis of counter-terrorism responsibility and give it to Justice Minister Michael Keenan … hmmm.

Sizzling the patriarchy. The ABC is kicking men off the airwaves tomorrow to mark International Women’s Day, which is apparently a terrible insult to both male and female presenters according to The Daily Telegraph. “A host of prominent women have labelled the ABC’s move to boot male television and radio hosts off air tomorrow for International Women’s Day as ‘tokenism’,” says the Tele. News Corp hates when the national broadcaster gets in on their turf — surely insulting ABC presenters is best left to the seasoned professionals at News (and in fact, quite a few of the “host of prominent women” quoted happen to be presenters on News Corp-owned Sky News).

Aunty isn’t the only media outlet with a novel way to mark International Women’s Day. Ms Tips hears at The Age in Melbourne there will be a sausage sizzle run by the male members of staff (how insulting!) and that women are encouraged to dress in vintage-style clothes for the day to draw attention to the … ahem … old-fashioned attitudes to women. Marking International Women’s Day will have a bit of extra kick at The Age, which has never had a woman appointed to the job as editor-in-chief (although it has many senior women in its ranks editing the weekend papers and the sport section), and where it has been noted with disappointment that CEO Greg Hywood has appointed 10 men and just one woman as part of the company’s digital restructure. There will be a sausage fest tomorrow, even though the senior ranks at Fairfax are a sausage fest every day.

The best face in television. Ross Cameron was at it again last night on Sky, this time saying we couldn’t rule out a connection between vaccinations and autism (except we can and we have). While most people are able to watch such comments in the comfort of their own homes with the ability to yell at the screen, Cameron’s Sky colleague Janine Perrett had to keep it nice, as she has done before. And like in October, when Cameron said Donald Trump’s comment about grabbing women by the pussy was good for women, Perrett made herself perfectly clear with just the shake of her head, an eye-roll and the best side-eye in the business. 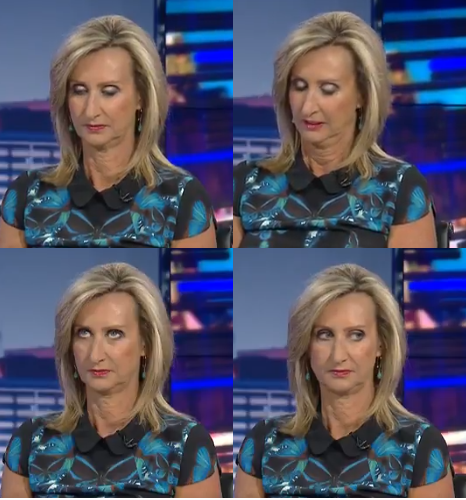 You can watch the full clip here: 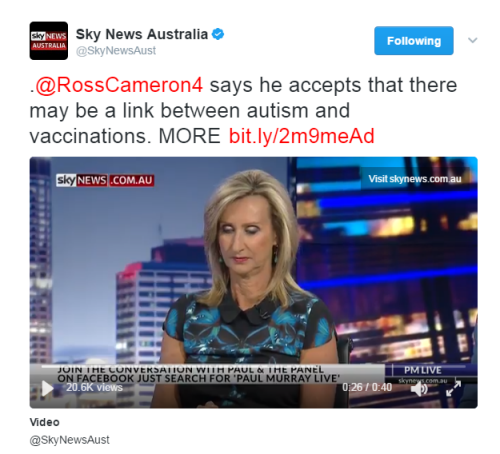 Sudmalis speaks on sexism. Government MP Ann Sudmalis has told her local paper she considered quitting after sustained attacks from Labor during question time last week. Sudmalis also said that sexism played a role in the way she had been singled out by the Labor Party after she defended cuts to penalty rates to Fairfax, saying they were a “gift” to young people trying to get a job. The member for Gilmore in New South Wales appeared to be distressed in Parliament after her comments were raked over in question time. Speaking to the Illawarra Mercury yesterday, Sudmalis explained she had thought about stepping down “for maybe half an hour” but the experience ultimately made her stronger and confirmed her view that women needed to be encouraged to run for Parliament. The report says:

“Mrs Sudmalis, who was visibly distressed in Parliament, said her emotion was due to ‘the unfairness of it all’.

She said she was targeted first as an individual, then as the holder of the seat.

‘I don’t believe they would have gone after a male, three days in a row,’ she said.

‘They would have moved it around, and taken it to a different member, but no, they did three hits in three days, which is most unusual.

Sudmalis didn’t back away from her original comments though, continuing to defend cuts to penalty rates.

Pauline Hanson’s mystery preferential voting changes. Pauline Hanson has never made any secret of her admiration for Donald Trump, and her Insiders appearance on the weekend proved it extends to her approach to “facts”. And the sheer volume of questionable assertions meant one or two were bound to slip through the gaps. Host Barrie Cassidy (and, subsequently, much of the media and political establishment) called her out on her admiration for Vladimir Putin, her suspicion of vaccines, her assertion that Muslims “hate” the West and her support for the penalty rates cut. But there was no breath or column space left for a couple of other quite possibly “alternative facts.” Early on, she stated:

“If you look at what happened in the past, the Howard government changes the preferences from optional preferential voting in the 1998 election. That was the first time they colluded together, they agreed to get rid of One Nation and put us last on the how-to-vote tickets.”

We couldn’t remember any changes of that sort, so we had a little look back and couldn’t find anything. Not in the text of the Electoral and Referendum Amendment Act 1998 or the accompanying summary on the Australian Electoral Commission website. Nor was it mentioned in the ABC’s history of preferential voting. In 2013, there were articles on the subject by Antony Green and Charles Richardson, which came in response to a push from senior Liberals for a shift to optional preferential voting (note: “shift”, not “return”). Christian Kerr’s initial report on that push in The Australian mentioned the optional preferential voting introduced by Labor governments at state level (in New South Wales and Queensland), but nothing at federal level. A research paper on electoral systems from 2007 published by the Australian parliamentary library mentions optional preferences in those state jurisdictions, but again, elides the federal changes Hanson claims the Howard government implemented. We asked our resident psephologist, William Bowe, and he said:

“I really haven’t the faintest idea what she’s referring to. The history of optional preferential voting in Australia is as follows: NSW introduces it in 1981; Queensland introduces it in 1991; the Northern Territory introduces it last year; Queensland abolishes it last year. You might also say that New South Wales introduced it in the upper house in 1999, and it was introduced in the Senate last year. But that the Howard government colluded to abolish it in 1998? No, and a very odd thing for her to think, given she was elected in 1996 and then voted out in 1998, both times in the lower house under compulsory preferential voting.”

How much does the media care about International Women’s Day?

Australia still more than a decade away from gender wage equality

How much is Perrett paid to share a cage with a rabid mandrill?

Hanson’s BS about ‘Howard changing the goal posts’ – hasn’t she used that line before? Wasn’t she mixing what happened in Qld – only the year has changed?

…. I thought we were in for a good ride when she started by acknowledging her “mate George” (Sinodinos – “The Sultan of Sophistication”?) – from then on it was anyone’s guess where she was going – congratulations to “Hopalong” Cassidy for almost keeping up enough to pull her up once or twice. Reminded me of that old “Ride the Wild Donkey” come-on rodeo trick – you just had to mount facing backwards.

Oh Howard changed the goalposts all right, He suddenly made racist slurs and baseless xenophobia The Australian Way. I first thought he was a coward, but no he was just a manipulating dog whistling piece of trash.

Hanson’s assertion of “… the Howard government changes the preferences from optional preferential voting in the 1998 election…”.

He lowered the bar on those goal posts on everything else – and couldn’t have done it without the aid of a complicit media referee.

Which male MP’s who supported / defended cuts to penalty rates, to the same extent, were treated less harshly than Ann Sudmalis?