The Daily Telegraph has backed off a claim that over 70,000 welfare recipients with medical certificates were dole bludgers.

Another week, another News Corp beat-up over “dole bludgers” has been taken to task by the Australian Press Council. 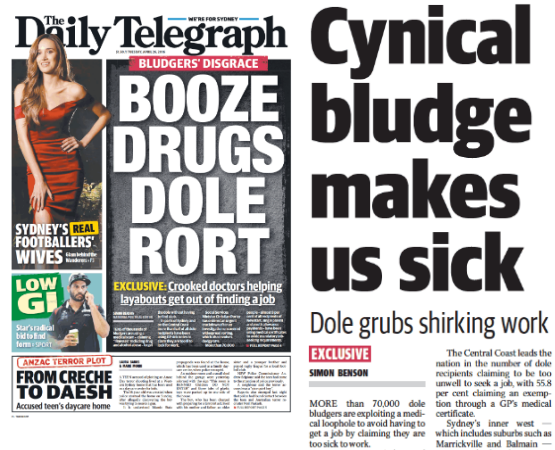 In April last year, Daily Tele scribe Simon Benson — who has since moved on to The Australian — claimed in an article headlined “BLUDGERS’ DISGRACE: BOOZE DRUGS DOLE RORT” that “crooked doctors” had been issuing medical certificates to over 70,000 welfare recipients to allow them to get out of their required job-seeking activities.

The piece carried the usual quotes of concern from the minister and figures acquired by the Daily Tele from the Department of Human Services, but when pushed to explain how it arrived at the figure that 70,000 — or about 8% of all those on Newstart, Youth Allowance and single-parent payments — welfare recipients were obtaining medical certificates illegitimately, The Daily Telegraph quickly backed off, editing its original article online to first say “tens of thousands of dole recipients” and then removing reference to any specific, or even vague, number altogether.

It still references 8% of all recipients, but online, the story now admits there was no basis to the claim that all 70,000 people who receive medical certificates would be considered “dole bludgers” trying to exploit a medical loophole.

But by this point, the front page of the paper had already called them bludgers and their doctors crooked.

The Press Council found that The Daily Telegraph in both its headline for the story and the subsequent claim about “crooked doctors” had failed to ensure accuracy.

The piece — syndicated amongst the tabloid papers online — has been updated today with a link to the Press Council ruling. — Josh Taylor

“Benson & Stenches – When Only The Best Will Do.”