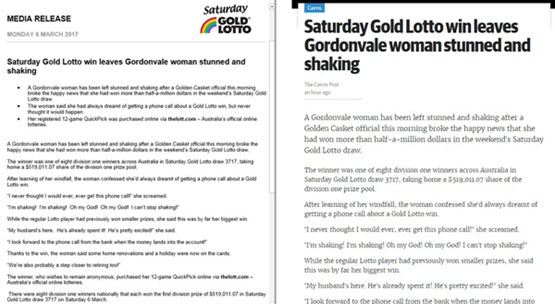 Tatts Group, the corporation behind Gold Lotto in Queensland (and various differently branded Saturday lottery games across the country) has a section on its website dedicated to various charitable donations and community work. But it appears Tatts is too modest to mention its donations to needy News Corp outlets. Radio Adelaide presenter Casey Briggs noticed on Monday — and subsequently tweeted — the distinct similarity between a media release that reported the $519,011.07 win that left a Gordonvale woman “stunned and shaking” and a story posted on The Courier Mail website (credited to far north Queensland offshoot The Cairns Post) on the same subject. The similarity being that they are identical — including the plug for thelott.com.

We looked into it a little further, and draw 3717 (which provided eight division one winners) provided News Corp with another story, with Tatts’ release about a Helensvale woman contemplating early retirement thanks to her win also finding its way, almost word for word, onto News.com.au, with Andrew Potts of The Gold Coast Bulletin being given a byline (the Cairns Post story didn’t credit a writer).  It also ran under Potts’ name in The Queensland Times, Sunshine Coast Daily and various regional Queensland outlets. The media releases mention that, of the eight winners, two were in Queensland, three in Victoria, one in the Northern Territory, and two in Western Australia, each of whom won $519,011.07. Tatts also produced a media release about a Knoxfield woman who won, which doesn’t appear to have been picked up by any media. The stories of the WA, NT and remaining Victorian winners don’t appear to have been chronicled. 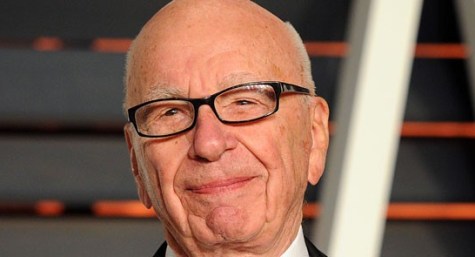 Lottery winners are entitled to privacy. This dates back to the Graeme Thorne case in the early sixties. Ticket purchasers are anonymous unless they have a Tatts card, but I understand that there is a not for publication option available when enrolling.
The only time winners come to the attention of the press in Victoria is when there is a dispute about the ownership of a winning entry (especially in a jackpot Powerball or Ozlotto situation. Winners should be entitled to privacy.