Colin Barnett hoped a deal with One Nation would save the Western Australian Liberals, but it could be the nail in the party's coffin.

Even by the remarkable standards she has set for herself over the past two decades, the coming week looms as a significant time in the political life of Pauline Hanson.

Since last year’s federal election, One Nation has built a momentum that seemed impervious to its familiar difficulties in maintaining parliamentary cohesion amid the Rod Culleton saga.

Even as this unfolded, the election campaign rulebook was being rewritten in the United States by Donald Trump, whose various affronts to dignity, decency and good sense were greeted as campaign-ending calamities by the media establishment — spectacularly wrongly, as it turned out.

The lesson seemed to be that a state of disarray serves only to enhance the appeal of populists like Hanson and Trump, whose principal selling point is the disruption they promise to unleash on a remote political class that governs in its own interests.

However, the unfolding fiasco that has been One Nation’s Western Australian campaign has tested this thesis to its limits, and it may well be that the cracks are finally starting to show.

Controversies surrounding the eccentricity of some of the party’s candidates were predictable enough, but the bigger and less anticipated story has been the backlash over the preference deal with the Liberals.

One Nation dumped two of its candidates last week after they spoke out against the Liberal deal, and another announced over the weekend said he was “giving it away” because he felt the deal to be “dishonest”.

Other critics may have been spared disendorsement because of their personal clout, or because they were in seats where the party couldn’t afford to go without a candidate.

While outbreaks of internal discord are by no means unfamiliar to the party, this one seems to have a dangerous parallel among the electorate at large — as illustrated by the chart below, which contrasts the party’s standing in state opinion polls (three from ReachTEL and one apiece from Newspoll, Galaxy, Essential Research and Morgan) with a federal trend going back to last year’s election. 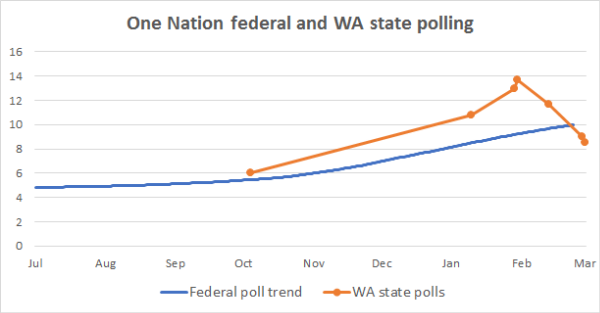 A long-running upward trend that shows no sign of abating federally was alive and well at the start of the state campaign, when Newspoll recorded the party’s primary vote at 13%, and an Essential Research poll conducted for the Greens had it at 13.7%.

Then came the announcement of the preference deal on February 12, followed by a downward turn that brought the party inside single figures in the two polls published over the weekend (8.5% from ReachTEL, 9% from Galaxy).

The seemingly allergic reaction will have been noted with concern by both parties in Queensland, where the Liberal National Party had been viewing a preference arrangement as a potentially decisive factor in a state election expected later this year, and One Nation was sizing up a power-sharing arrangement in the event of a hung parliament.

However, One Nation has always known that whatever difficulties it might face during the Western Australian campaign, it had a major card to play in the form of a late visit to the state by Pauline Hanson.

This guarantees it the effective free advertising of news coverage with which to prime disengaged voters right when it matters most.

So it was that Hanson flew into Perth last night to kick off a tour itinerary that will take her to all four corners of the state over the coming days.

However, Hanson’s increasingly vocal enthusiasm for Donald Trump means the success of her latest charm offensive depends heavily on voters not listening too carefully to what she has to say.

There are all sorts of reasons to think Hanson’s view of Trump’s victory as a model for her own populist revolt is misplaced, starting with the finding from an Ipsos poll that Australians take a dim view of the 45th president by a ratio of three to one.

Another is focus group research conducted in Queensland by union economist Scott Steel (better known to Crikey readers as Possum Comitatus), who found that Trump was considered a “dangerous egomaniac by a majority of soft One Nation voters”.

Leading with her chin, Hanson took to the ABC’s Insiders yesterday morning to sing from the Donald Trump song sheet with respect to Vladimir Putin, whom she praised as a “strong man” with a 97% approval rating.

To the limited extent that this line might be sellable in the United States, it’s a reflection of the blindness of partisanship that increasingly prevails there.

In Australia, where few outside the One Nation inner circle look to Trump as an opinion leader, Putin is chiefly perceived as the instigator of the MH17 disaster that cost 35 Australian lives.

One of the rare periods of respectable poll ratings Tony Abbott enjoyed during his prime ministership followed his tough talk to Putin in response, so there is little reason to think Hanson will find a receptive audience for her efforts to finesse his role in the incident.

Hanson’s visit also comes hard on her declaration of support for the cut in Sunday penalty rates — no doubt an authentic display of conviction politics given her own small business background, but a very tough sell to the wage earners who hold the key to her party’s electoral success.

When Hanson came to Perth in late January, news coverage focused on the “rock star” reception she received at suburban shopping malls.

This time around, viewers could instead see the very different spectacle of Hanson stammering her way through responses to sharp questions on controversial subjects.

The question that remains to be answered over the final week of the campaign is the extent to which any publicity for Hanson is good publicity.

Thick as two short planks? You bet I am, I mean, you bet she is.

I thought that her disastrous interview with Barrie Cassidy would not have much traction with her electoral base because they generally wouldn’t watch Insiders, but it has been picked up in a big way today by the pm and pro vaccination groups among others.
Perhaps people might start listening to the drivel that comes out of her mouth more now.

Will
Reply to  bushby jane

Very telling to see though that Turnbull’s criticisms of Hanson today were cast as MH17 sanctions and vax policy issues (i.e. policies that have bi-partisan support), rather than Hanson false and inflammatory insistence that Islam is a political ideology (rather than a religion). He looks to be following Howard’s lead, and got himself one of those silent dog-whistles.

From commenting on that endorsement from her mate “George” Sinodinos ….?
….. “Malcolm’s respect” compared to 20 years ago – that wouldn’t have anything to do with his own DD election :- needing only half a quota for a seat, and her showing up on the Senate door-stoop, that dark stormy night, with her litter of three senators – the way he needs votes?
I don’t know which train was the most fun, hers (“Join The Magic Puddin’ Club Party” – wage cuts for small business profits) or Jethro’s “privacy and dummy-spit”.

PHON are a joke and have always been so. I was never concerned about their ‘rise’.