Good morning, early birds. The PM balances his relationship with Pauline Hanson, the budget is set to tackle housing affordability and Trump says his phone was tapped. It's the news you need to know, by Sally Whyte and Max Chalmers.

Prime Minister Malcolm Turnbull has criticised Senator Pauline Hanson because of her praise for Russian President Vladimir Putin. Hanson said on Insiders that Putin wasn’t responsible for the shooting down of MH17, because he didn’t “push the button”, but Turnbull hit back with: “That was a shocking international crime. Vladimir Putin’s Russia is not, and should not be, an object of admiration in any respect.”

Hanson made many claims in yesterday’s interview, and despite being the government’s most reliable voting partner in the Senate, the PM took exception to both her views on Putin and her take on mandatory vaccination. Hanson told Barrie Cassidy forcing parents to vaccinate was “a dictatorship”, and parents should be able to do their own research.

The PM has not made a habit of speaking out against Hanson’s views, and a feature in The Australian today shows just how much he needs her votes. In a conversation with sugar farmers before Christmas last year, Hanson picked up the phone and called the PM, handing the phone around so farmers got a direct line to the top.

The government is continuing to set the stage for the federal budget, with Treasurer Scott Morrison signalling that families will get a good deal come May 9 (but when has a treasurer ever said the budget wouldn’t be good for families?). The government will look at addressing housing affordability, but it will avoid the cuts of the 2014 budget, according to the report on the front page of the Oz.

“At the end of the day you have to deliver growth, guarantee services and get the budget back to balance in a credible way,” Morrison said. Changes to the capital gains tax have been “left open” according to the story, despite Turnbull killing off the idea of changes after reports in the AFR last month.

Laura Tingle writes in the Australian Financial Review today the expenditure review committee of cabinet is in the “dead zone” of budget planning: “when a range of policy options has been developed and the government must consider which issues to progress, which policy announcements should be made before the budget, and which policy announcements to make the centrepiece of the budget.”

Liberal and Labor on a knife edge in WA, while things look up for One Nation

Sydney: The Royal Commission into Institutional Responses to Child Sexual Abuse begins a week of hearings covering Commonwealth, state and territory governments. It will focus on policies and procedures in child protection and safety standards and responses to allegations of child sexual abuse.

Western Australia: Senator Pauline Hanson landed in Perth yesterday and will be travelling around the regional areas of Western Australia this week ahead of the WA state election on Saturday. Hanson told reporters yesterday voters hate Premier Colin Barnett:

“What I’m picking up is just a sheer hatred for Colin Barnett. I hear it all the time.

“I’m not here to shore up Colin Barnett’s premiership of the state. I’m here to actually give people an opportunity to vote for someone other than the major political parties.”

Jakarta: Foreign Minister Julie Bishop will be meeting with Indonesian ministers today on the sidelines of the Indian Ocean Rim Association leaders’ summit. Trade Minister Steve Ciobo is also in Jakarta at the conference, and Prime Minister Malcolm Turnbull will fly in tomorrow.

Bangalore: The third day of the Test match between Australia and India continues, with Australia finishing day two at 237-6, giving the visitors a lead of 48 runs. Matthew Wade and Mitchell Starc will resume for the Aussies today.

Australia poised to seize world economic record — Jessica Irvine (Sydney Morning Herald): “Aussies are fond of talking ourselves down. And caution is warranted. But we are about to lay claim to the strongest economic performance in world history.”

Dodgy GDP failed to reveal the secret recessions we had to have — Adam Creighton (The Australian $): “GDP per person is surely a more relevant criterion for how we’re travelling economically. And far from 25 years of unbroken economic growth, on that measure Australia has had recessions in 2000, 2006, and late 2008.”

Time for the truth behind Centrelink controversy and Andie Fox — Paul Malone (The Canberra Times): “Andie Fox went to the mass media with her story. She decided to make it a matter for public discussion.”

The fight over section 18C and 18D should be put to bed — Colin Rubenstein (The Age): “…statistics maintained by the Jewish community show there was a substantial decline in incidents of anti-Jewish harassment in Tasmania and South Australia following judgements in Jones v Scully and Jones v Toben respectively, which were prosecuted under Section 18C.”

The real danger is not militant Islam but the enemy within — Andrew Bolt (Herald Sun $): “But ask yourself: if this is how Muslim immigration changes a state school, how is it changing whole suburbs?”

The Army should be non-political. So why is it at Mardi Gras? — Miranda Devine (The Daily Telegraph $): “The Army is engaged in a radical social engineering experiment, rejecting what it regards as an outdated male Anglo culture and segregating its troops according to ethnic, religious, sexual and gender identities which are accorded special privileges as victim groups, in the name of diversity”

President Donald Trump has alleged that his predecessor, Barack Obama, ordered a wiretap on Trump Tower during the 2016 election campaign. Trump offered no evidence for the claim but compared it to Watergate and labelled Obama a “bad (or sick) guy!” on Twitter. An Obama spokesperson said the claim was “simply false”. 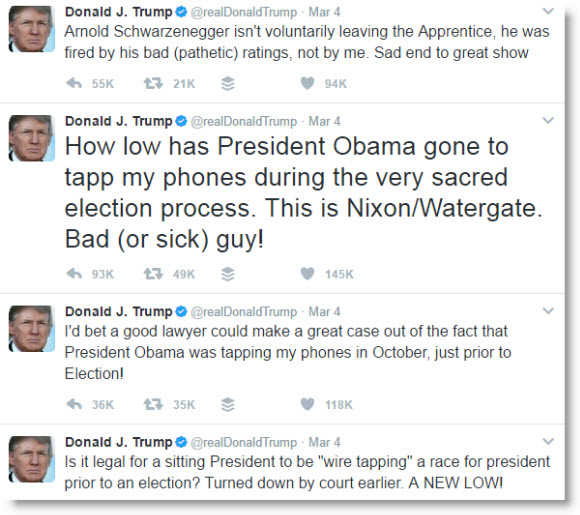 It’s unclear what is behind Trump’s tweets on the topic, though one theory is that they were inspired by a Breitbart article airing unverified allegations made by a conservative radio host. Press Secretary Sean Spicer has since tweeted that the White House and the President will not comment further until Congressional intelligence committees agree to investigate the unsourced claims.

A mass public rally and a crisis meeting. So starts the week of Francois Fillon, the man previously expected to win the French presidential election but now polling third. Fillon’s wife said at the weekend that she had not worked a “fake” job for the Republican party candidate, but the scandal has not abated. Fillon’s party will meet Monday to discuss his embattled bid while he holds a rally in Paris. A small turnout could embolden calls for his own party to replace him in a last-ditch effort to overtake Marine Le Pen and Emmanuel Macron. — BBC

Israeli Prime Minister Benjamin Netanyahu will travel to Russia this week to voice objections to what Israel sees as a growing Iranian foothold in Syria. Israel claimed last year that Iran had tried to move forces into the Golan Heights, the strip of Syrian territory bordering Israel occupied after the 1967 Six-Day War. — Reuters

The UN says 12 people have been treated after possible exposure to chemical weapons in Mosul, Iraq. There are fears chemical weapons have been used by Islamic State as Iraqi-led forces push to recapture the western part of the city. — The Guardian

Facebook says it can sway elections after all—for a price (Quartz) “To the majority of its users, Facebook seems like a passive platform for sharing news and engaging with various communities. But the social network is also a sophisticated multibillion-dollar advertising giant that is, at its heart, in the business of persuasion.”

Buried alive: stories from inside solitary confinement (GQ) “In the age of mass incarceration, solitary confinement—the practice of isolating a human being in a cell for 22 to 24 hours a day—has become a punishment of first resort in America. It’s the prison of the prison system, and like the larger institution that feeds it, it is rife with cruelty, racism, and Constitutional violations.”

The American dream has moved to Canada (Macleans) “By virtually every measure, Canada has surpassed the United States as the shining city on the hill, where everyone is safe to reach their potential. And people around the world have begun to notice.”

The crimes of SEAL Team 6 (The Intercept): “Most SEALs did not commit atrocities, the sources said, but the problem was persistent and recurrent, like a stubborn virus. Senior leaders at the command knew about the misconduct and did little to eradicate it.” 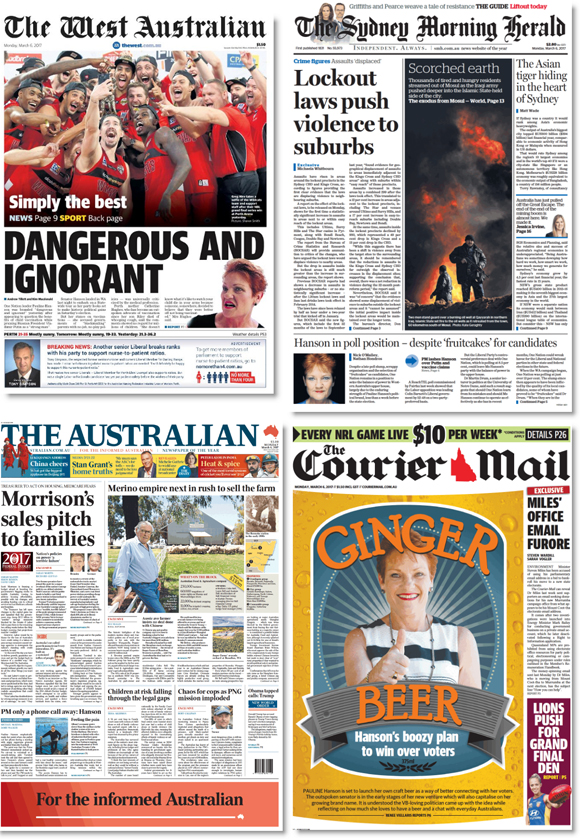 Added to her disdain for those who need welfare … Pauline Hanson, after listening to the “people” has come down against penalty rates thus once again mirroring the LNP position … the “people” must be business owners … because if you are a low paid employee facing a significant pay cut then expect no sympathy or support from Pauline Hanson … you are just rubbish …