ABC staff to learn fate tomorrow. ABC managing director Michelle Guthrie is set to wield the axe through middle management at the national broadcaster tomorrow, with millions of dollars of savings mooted to be funneled back into content production. In an email to all staff this morning, obtained by Crikey, Guthrie says: “I have been focussing in recent months on the ABC strategy that will address our audience challenges and ensure the ABC is best-placed to meet its Charter responsibilities. In my conversations with staff I have made it clear that 2017 will be a year of action and change.” Staff have been told that a briefing will take place at noon tomorrow at the ABC’s Ultimo headquarters, with staff able to tune in from around the country.

Paleo Claire better than Paleo Pete. At the start of last week, most of us didn’t know that Paleo pear and banana bread was a thing, but after the Department of Finance’s $40,000 recruitment video for graduates, it’s not likely we’ll forget in a hurry. If you’ve forgotten, the badly acted and awkwardly scripted clip opens with a graduate asking her colleagues if they would like to pop downstairs for a “Paleo pear and banana bread”. There are no takers, though, as it’s a “bit fancy” for them. 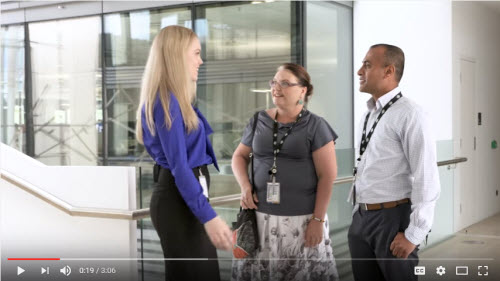 Ms Tips understands that the young lady, named Claire in the video, was quite the celebrity at the Old Parliament House bar on Friday night, a popular watering hole for the young set of public servants in Canberra. Our spy tells us “people were flocking to her” and taking photos. We’re not sure if any of the drinks on the menu fit into a Paleo diet, but it looks like there is at least some upside to the country laughing at your video.

Nightmare on Spring Street. Factional fighting in the Victorian Liberals is the talk of Spring Street as Liberal leader Matthew Guy is set to tell the party’s Victorian branch president, Michael Kroger, that he won’t be backing him to continue in the gig, with former Howard-era minister Peter Reith challenging for power. As reported in the Herald Sun this morning, Guy is joined in the Reith camp by federal MPs Kelly O’Dwyer, Scott Ryan and Mitch Fifield as well as ex-premier Jeff Kennett. Supporting Kroger are Greg Hunt, Josh Frydenberg, Michael Sukkar and Alan Tudge. Ms Tips understands that state Liberal MPs will fall in behind Guy, while the issue has obviously divided their federal counterparts. Reith says he won’t talk publicly about why he is challenging Kroger, but it doesn’t seem to matter as many reports have been airing the party’s dirty laundry anyway.

Flying heap of crap watch: the local edition. Advocates for Crikey‘s favourite flying heap of crap, the F-35, have been on a propaganda offensive in recent months, insisting that the overdue, overbudget jet fighter that can’t fly or fight or eject its pilots without killing them, etc, in fact, is awesome. Alas, the hideous cost and awful performance of the plane keeps spoiling their efforts, and it was no different yesterday at the Avalon Air Show, when the F-35s being shown off couldn’t leave because there might have been bad weather at their destination. This isn’t a new problem, of course — the F-35 has long been known to be unable to fly in storms, which isn’t really a problem as long as our opponents agree to only fight wars in fine weather. Now the line from F-35 apologists is that the planes just need a minor tweak to be lightning-proof (civilian aviation airliners have been lightning proof for decades). But the problem — which is to do with the plane’s electrical and fuel tank systems — was supposed to have been fixed two years ago. “We were having a problem qualifying the airplane to fly in lightning, (but) that problem is basically behind us,” USAF Lt Gen Christopher Bogdan was reported as saying in 2015. Only, apparently, if the planes are flying backwards.

Bernardi’s votes and dollars disappear. The defection of Senator Cory Bernardi from the Liberals to his new Australian Conservatives Party has obvious implications when it comes to tallying up votes in the upper house, but what will it mean for the Liberal Party’s bottom line? Bernardi’s interests register has been updated to show that he is no longer a member of, or donor to, the South Australian division of the Liberal Party of Australia, the Young Liberal Movement or the Sir Paul Hasluck Foundation — but he is now a donor to the Australian Conservatives, of which he is still the only member of “the team” on the website.

The Young and the restless. The sleepy NSW town of Young was jolted awake last week with the news the Australian Federal Police had raided a property on the outskirts of town, arresting a man suspected of assisting the Islamic State in creating missiles and missile-detection systems. It was a bumper day of news for the town, which is just under two hours away from Canberra. Ms Tips hears there was a prang between two cars in the centre of town that day as well — one of which was being driven by an ABC reporter rushing from a story covering George Christensen resigning as Nationals’ Whip to cover the terror raids and back to the capital again. The cars were towed away, and the occupants got away with only bruises. Breaking news at breakneck speeds maybe?

“In my conversations with staff I have made it clear that 2017 will be a year of action and change.”

We get it Mamm! Things aren’t going to be the same. You are getting rid of experienced mid tier programme management so you can afford to buy more mindless Murdoch programmes?

Re The F35 if I am organising an invasion of Oz then I come through Darwin during wet season. Any invasion will come from the north where there is electrical activity for half the year! Hmmm great defensive weapon we are buying.

Could someone with an Anthony Green expertise tell us whether Borey Carnadi, now no longer top of the Lib ticket with a 6 year tenure, be treated as one of the half of the Senate which have to face the vorters at the next general election.