All the Oz’s vendettas, in one handy word cloud

Sadly, 18C was not the most commonly used word in The Australian's editorial pages. But it was close.

The week of Senate estimates was one in which it was established that the national intelligence agency had accessed the metadata of journalists in pursuit of whistleblowers. It was a week in which the major parties raged at each other over the issue of penalty rates and the independence of government agencies. Overseas, one of the most divisive presidents in history addressed Congress for the first time, and more allegations surfaced that he or some in his administration had been colluding with Russia.

It was also a week in which a costly and time-consuming parliamentary inquiry recommended no changes to a modestly invoked section of some legislation. And guess which of those at our national broadsheet couldn’t stop talking about? In addition to 15 news stories and two Bill Leak cartoons directly or indirectly about section 18C of the Racial Discrimination Act, 18C was the sixth most common word in the the opinion and editorial sections of The Australian, featuring 29 times. To put that in context, Trump got 24 mentions, and “Australia”, “politics” and “Abbott” all got 23. 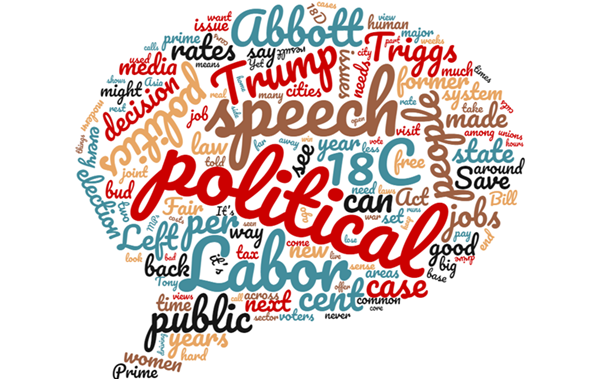 By the numbers, the top 10 most used words in The Australian opinion and editorial sections: