How to tell if penalty rate cuts are working

Determining whether cuts to penalty rates will have any benefits beyond business bottom lines will be difficult, but there are some data available.

While the government’s initial response to the Fair Work Commission’s cuts to penalty rates was confused, the main rationale offered by opponents of penalty rates in the business community — and previously by Coalition MPs — is that cutting them would lead to increased employment in the hospitality and retail sectors. By lifting the deadening hand of Sunday and public holiday penalty rates, so the reasoning goes, employers would be inclined to put on more staff and open longer hours (ignoring, for a moment, that many retail employers have been found to be ripping off their employees when it comes to wage payments).

But is this true? And how can we tell, apart from relying on anecdotes from supporters and opponents of penalty rates?

The ABS’ detailed workforce data provides a breakdown of employment in key sectors and sub-sectors. The sub-sectors most relevant for the penalty rates debate are Food and Beverage Services and Other Store Retail. Food and Beverage Services covers cafes and restaurants, which had public holiday rates cut, and fast food, pubs, bars and clubs, which had public holiday and Sunday rates cut. This is the sector that has experienced strong growth over the last five years.

We’ve averaged employment across the year (strictly speaking, February to February, reflecting ABS data) because employment tends to be seasonal and affected by weather, but it has grown nearly 11% in average annual terms since 2012. That compares, in average annual terms, with overall workforce growth of just under 5.6% in the same period. But it’s been lumpy, with much of the growth coming over the last two years (November 2014 is when employment first topped 700,000): 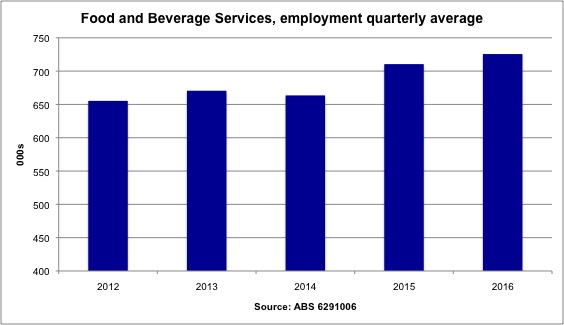 Interestingly, the strongest growth has come at the same time as employers have ramped up their campaign against penalty rates.

The other category, Other Store Retail, is basically shops apart from supermarkets and food retailers (the ABS has an amusing list of different shops, including “coal retailing”, which is perhaps where Scott Morrison shops for his lumps). Supermarket employment, which is not affected by the FWC determination, can be found under Food Retailing, while Fuel Retailing (which is a minor employer) is a separate category again. As the ABS data show, Other Store Retail has grown more slowly in recent years than the hospitality sector 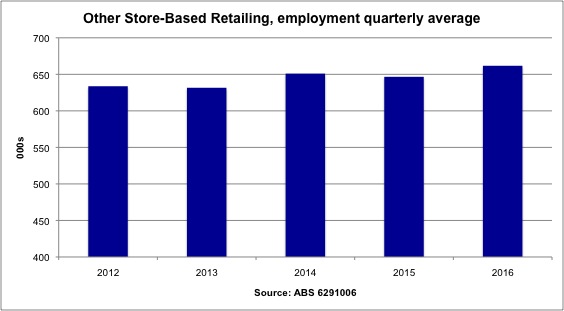 What we don’t have is any breakdown of hours worked in each sub-sector, so if hospitality and retail staff simply work longer hours to make the same money, which is one of the goals of employers and the commission, it will be hard to verify. In any event, penalty rate cut advocates insist it will create more jobs, not merely require existing workers to work longer for the same pay.

[What exactly is the government’s position on penalty rates?]

And what will make any assessment harder is that factors such as weather, the broader economy, the exchange rate and secular changes in Australian spending patterns — responsible for lower in-store spending and more eating out in recent years — will also affect employment levels. And, ultimately, the total amount of spending available to the entire retail sector isn’t going to change either way; a cafe or clothes shop opening on a Sunday isn’t going to magically increase the level of overall demand from consumers for what they’re offering.

But let’s take business at its word, and keep an eye out for more rapid employment growth than we’ve seen over the last two years, as a result of penalty rate cuts.

A pivotal question behind all this is ‘how many employers were paying correct Award wages and penalty rates in the first place.

There is sufficient anecdotal evidence to suggest that a good many employers are not, that they are not recording wages and hours correctly and aren’t reporting them as wages after paying through petty cash, no tax, no records or anything.

Which will mean the effect is even less than any model will predict.

If it works, one would expect to see BOTH the hours worked, and number of people employed, in those sectors, increase.

In reality, the only employers penalty rates present a problem to are the ones who
a) aren’t charging their customers enough
b) are taking too much profit
c) have fundamentally broken business models (ie: can’t change (a) or (b) and stay solvent).

The argument that reducing penalty rates will result in increased employment defies all logic. The key objective of any small business owner is to maximise the profitability of the business to that owner. The key objective of employing staff is to ensure a satisfactory level of service to customers. The cost of employing staff is built into the price of the product or service: so a certain percentage of the money you pay for your cup of flat white, for example, goes to pay the wages. Sell more cups of coffee and you have more money to pay for more staff. The number of cups of coffee you sell, though, is determined by the number of customers you have. Cutting penalty rates won’t magically cause the number of customers to increase. A business owner employs the minimum number of staff possible in order to meet customer service demand. Cutting penalty rates has nothing to do with customer service demand, so it’s ludicrous to think the number of people a business employs will increase because of it. Instead, the money the small business owner saves will simply be redirected to meeting his or her primary objective.

Maybe there’s nothing wrong with that, because plenty of small business owners do it tough too – but if that’s the case then the government should at least have the guts to say that is why they support the move.

And yet, despite all experience, evidence & common sense, the fallacy of more jobs/higer profits rolls on like Jagganath, whilst deluded adherents, to increase its slippery progress, throw minimum wage workers under its sledge.
Welcome to the NuRite WhiteShoe Brigade mkII.