Turnbull has frequently attended the event in the past, but it is not surprising he is suddenly too busy, considering the AGM at Mardi Gras attempted to uninvite him.

The Prime Minister’s Office usually sends out media alerts in advance of any of Malcolm Turnbull’s radio or TV interviews or media events in order to allow the media to organise to cover them. This morning, however, interviews on an FM breakfast show and on AM were not announced in advance, except via the PM’s Twitter account, and a subsequent doorstop in the Mural Hall (a rarity for the Prime Minister) came with no media alert. However, word spread through the gallery quickly enough for a large contingent of the press to be there.

In any case, after Turnbull continued to refuse to endorse or condemn the Fair Work Commission’s decision on penalty rates, the member for Wentworth confirmed he would not attend the largest event in his electorate — the Sydney Gay and Lesbian Mardi Gras — on Saturday due to commitments interstate. Turnbull has frequently attended the event in the past, but it is not surprising he is suddenly too busy, considering the AGM at Mardi Gras attempted to uninvite him. Because he has failed to allow a free vote on marriage equality, he would likely face a somewhat hostile crowd.

Plus it’s not clear if he would have had permission from George Christensen, anyway. He did send his well wishes in LGBTI rag Star Observer, in the most bland way possible. 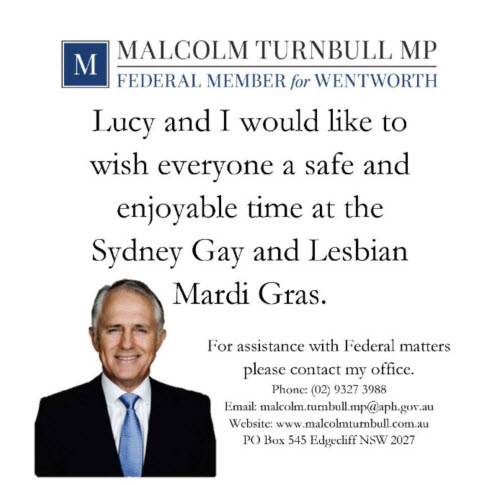