Good morning, early birds. We have some good news on the economy, penalty rates fight continues, and we find out the identity of the new WA senator. It's the news you need to know, by Sally Whyte and Max Chalmers.

ECONOMY UP, BUT THERE’S A WARNING

The Australian economy grew by 1.1% in the three months to December last year, meaning that we have avoided a technical recession after the economy went backwards in the quarter before. The economy grew by 2.4% over the year, which was close to what Treasury forecast.

The Australian Financial Review writes that many indicators in the figures released by the Australian Bureau of Statistics yesterday are positive for the economy, with household spending up, as is national income. Treasurer Scott Morrison said yesterday:

“These growth figures say we are at the top of the pack, and while last September quarter’s figures were surprising and dis­appointing, what we’ve seen in the December quarter is a return to the strong momentum that we’re seeing in our economy.”

“The September quarter’s negative result remains unrevised at 0.5% but increasingly looks more like a one-off combination of factors amid a stronger period of growth across 2016 than 2015 — and is all the better for coming despite the decline in mining investment, which will shortly tail off.”

So what to do with the good news? Fairfax’s Peter Martin writes that Treasury secretary John Fraser has warned the government not to spend the unexpected windfall from improving coal and iron ore prices, but to use the funds for budget repair. Fraser told the Senate economics committee:

“We need to take great care not to fall into the trap of spending unexpectedly higher revenue, should it arise, in a way that would structurally weaken the budget as may have occurred through the early 2000s.” 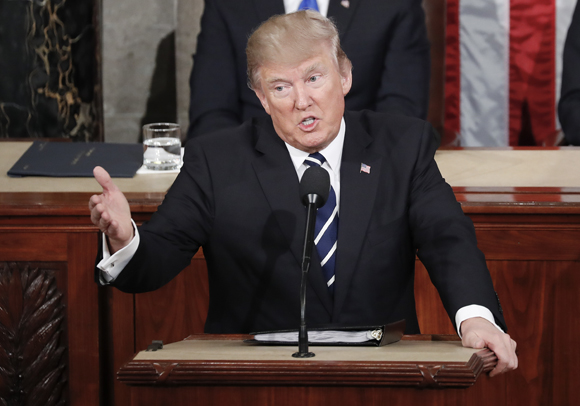 Donald Trump has received broadly positive coverage of his address to the joint houses of Congress. The New York Times dubbed it “optimistic”, while The Washington Post said Trump won marks for his “measured tone”. The speech avoided the lengthy media attacks of the past and delivered a made-for-TV moment in which Trump drew attention to the wife of a US Navy SEAL killed in a recent raid in Yemen. Trump denounced recent threats to Jewish groups as well as a Kansas City shooting that appeared to be inspired by racial animus.

Earlier, in a conversation with television news anchors, Trump raised the prospect of allowing the children of undocumented immigrants to remain in America. The address, however, continued his hardline anti-immigrant rhetoric.

Battle lines are still being drawn over penalty rates, with The Australian leading the front page with the news that fewer workers will be affected by last week’s Fair Work Commission decision than Labor is claiming. The Oz reports 285,000 workers, or as few as 2.8% of the workforce would be affected by cuts to Sunday penalty rates for hospitality, fast food and retail staff. Labor has claimed that 685,000 workers stand to lose money over the move. The ABC reports the fight has now moved to how soon the cuts to penalty rates should be implemented. Predictably, industry groups are arguing there should be no delay, while unions say rates shouldn’t be changed at all. The Fair Work Commission has called for submissions about how the move to new rates should take place. Meanwhile, Liberal Senator Eric Abetz has written in an opinion piece for Fairfax that “in order to protect existing workers, the Fair Work Commission should use the powers it already has to grandfather current employees’ salary rates so that only new employees are covered by these new rates”.

Canberra: Parliament sits today, and Senate estimates continues, with the Department of Human Services expected to answer questions about the Centrelink robo-debt debacle.

Canberra: A High Court judge will make a ruling on how former senator Rod Culleton‘s vacant Senate seat will be filled. Crikey‘s William Bowe wrote in January that it is likely to Culleton’s brother-in-law Peter Georgiou.

Melbourne: Christian Brother Robert Best will be sentenced after pleading guilty to 24 counts of indecent assault against 20 boys between 1968 and 1988.

Grandfather the penalty rate decision so no worker is worse off — Eric Abetz (Sydney Morning Herald): “I am pleased that the Fair Work Commission made the decision that it did. It will support small businesses to create more jobs and it will help otherwise unemployed people to gain entry to the labour market. But it’s now important that the Fair Work Commission’s decision is implemented in a fair manner for current workers in the retail, hospitality and tourism sectors.”

Tony Abbott’s plan to cut immigration isn’t the way to solve Sydney’s housing squeeze — Jacob Saulwick (Sydney Morning Herald): “The Abbott position is a cop-out. It would be absurd to undermine one of the best things about Australia because governments have failed to do their jobs well.”

Respect the umpire or expect mayhem — Judith Sloan (The Australian $): “Either the FWC is independent or it is not. If you don’t like a decision and think the government should override it, then you should get rid of the FWC (and the associated expense to the taxpayer). There is no half way house of this matter. The question now is: does Labor intend to abolish the FWC?”

British Prime Minister Theresa May has suffered a setback with the bill to trigger Article 50 and thus begin formal Brexit negotiations being sent back to the House of Commons by the House of Lords. May’s Conservative Party does not have the numbers in the House of Lords, where the majority of peers would like the legislation to include a provision guaranteeing the rights of EU citizens living in the UK. Conservatives argue any such guarantee would weaken Britain’s bargaining position in the talks. — The Guardian

Forces aligned to the Syrian government have entered the historic ruin town of Palmyra. The city was recaptured after Islamic State militants destroyed some of its World Heritage ruins, only to be lost again in December 2016. — Reuters

Uber boss Travis Kalanick has been forced to issue his second apology in just weeks after being caught on camera in a heated and “disrespectful” argument with one of his company’s own drivers. A video of the incident showed driver Fawzi Kamel arguing with Kalanick about financial losses he had suffered after deciding to drive for the company. Two weeks earlier Kalanick apologised for “abhorrent” sexism at the company. — BBC

Three Catalonian architects have won the field’s top prize, the Pritzker. The three person team were little known outside of Spain. You can see some of their work here. — New York Times

How the trolls stole Washington (New York Times Magazine): “What does it mean for the American presidency itself to become a fake out?”

CNN chief Jeff Zucker unveils plan to dominate digital: new shows, a $25M YouTuber and Donald Trump (of course) (The Hollywood Reporter): “Entering his fourth year as president of CNN Worldwide, he has to maintain CNN’s ratings and visibility against traditional cable rivals Fox News and MSNBC while also taking on a multitude of new competitors including BuzzFeed, Vice and others in the digital space.”

Avoiding questions about Trump’s mental health is a betrayal of public trust (Columbia  Journalism Review): “Psychiatrists can and should argue about whether they should speculate publicly about Trump’s mental state … the mental condition of the president of the United States is as legitimate a subject of journalistic concern as it is of everyday conversation.”

Breeding cows that can defend themselves against jaguars (The Economist): “The idea is to teach cattle self-defence, or rather to breed the instinct into them. “